Campervan bookings are on the rise in the UK as holidaymakers opt for private, portable accommodation for a post-lockdown break.

Safety measures being used by rental companies include online check-in, contactless pick-up, video tutorials in advance and extended gaps between bookings to allow for deep cleaning, in line with government advice for tourism accommodation. Most also offer flexible booking and fee-free date changes. Although the majority of the companies listed below are van-sharing websites (with privately-owned vehicles), they work with owners to advise on stringent new health and safety standards; some individual listings also include the info on cleaning regimes, too. 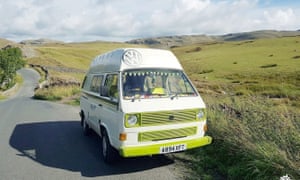 There are still vans available from some rental companies for late summer – and plenty for autumn – whether it’s a back-to-basics 1960s VW, a bespoke wood-panelled Sprinter conversion for two or a family-size motorhome complete with fridge, shower and all mod cons.

The idea of travelling spontaneously may be attractive, but it’s advisable to book campsite pitches in advance. The Camping and Caravanning Club has online lists of remaining touring pitches for the rest of August; and Pitchup also has availability listings around the UK – even for this coming weekend.

Ed Bassett of Camptoo suggests campers consider heading away from the obvious areas: “Campsites in the traditionally popular tourist areas such as Cornwall, Devon, north-west Wales and western Scotland have been very busy recently. It’s important to remember that there are many other beautiful areas that are less crowded and ready to be explored, such as North Yorkshire’s moors and dales, and Northern Ireland.” 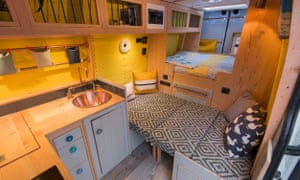 Quirky Campers
Van bookings for July and August are double last year’s, the company says. The season has also extended into autumn, with many campers booked till the end of October – and treble the number of bookings in September compared with 2019. Many of its vehicles are converted Sprinter vans (small commercial vans), a particularly popular style, and part of the growing #vanlife movement. Vehicles start at around £75 a night, with a variety of styles and sizes, from a Scandi-inspired three-bed in the Midlands to a cabin-style van with wood-burner on the north-east coast, sleeping two.

Indie Campers
Established in the UK last year, Indie Campers is one of Europe’s largest rental companies. Its fleet includes the modern Atlas and the Active models, each sleeping four, with a shower, toilet, cooler or fridge, and aircon (from £100 a night). Extras include bedding and kitchen kits, bikes, outdoor furniture, surfboards, wetsuits, barbecues and more. The company has seen a huge rise in British domestic bookings for summer 2020, which are up 410% from 2019. UK pick-up locations are Stanwell near Heathrow, and Edinburgh, both with 24/7 collection. The company says it is around 90% booked up for the rest of this month and three-quarters booked for September, with more availability from October onwards.

Bunk Campers
The nine models in Bunk’s fleet range from the compact budget Roadie for two to the Grande, sleeping six, complete with shower and toilet – and all vans are pet-friendly, too (from £75 a night). There are depots in Leeds, Birmingham and Heathrow, as well as Dublin and Belfast. Bunk Campers has also seen a surge in domestic bookings this summer, as domestic holidaymakers look for breaks closer to home. Availability for August and September is limited, and interest is continuing for October and November. Bunk’s vans all have heating, so autumn is a popular time. 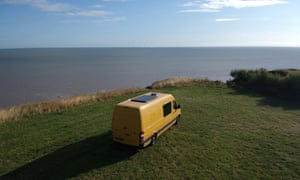 Camplify
With around 700 rentals across the UK, van-sharing site Camplify launched in 2014 with the aim of being “the Airbnb of campervans”. Vehicles include restored 1970s VW campers, airstream-style trailers, modern motorhomes for large groups and more, many of which come with negotiable pick-up locations (prices from £35 a night). The site has seen a 185% increase in summer bookings year on year, but still has availability for the rest of August and into autumn.

Camptoo
Camptoo has around 600 UK van-share listings, again with a vast array of styles and sizes (from £50 a night). It too has seen a significant increase year on year, and a huge rise in domestic bookings, up 430% for July 2020 compared with July 2019. The majority of travellers are also leaving booking to the last minute, with 70% bookingbetween one and three weeks in advance. Although there is availability for the next three months, early booking is advised, with September and October already up 263% on last year.

GoBoony
Taking its name from the US phrase “in the boonies” (meaning in the middle of nowhere), GoBoony has a huge range of privately owned campers, withVWs of every colour and era, including modern compact VW “camping cars” (from £25 a night). Thanks to a surge in bookings, the company reached its annual target by the end of June, with 320% more vehicles on the road than this time last year. It has also seen an increase in last-minute availability from owners on the site, as more people choose to rent out their vans. It expects September this year (50% booked so far) to be busier than August (90% booked).