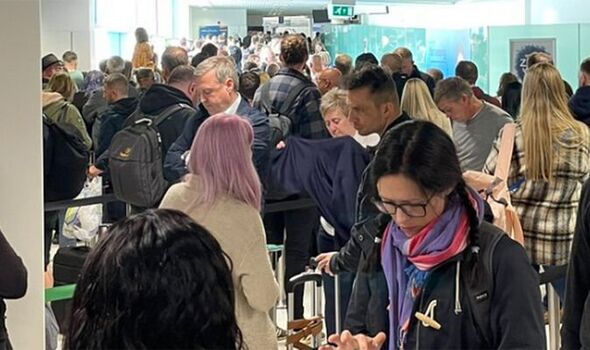 Sukh Khatkar, 26, had hoped to fly out to Amsterdam to visit his girlfriend today but arrived to “one mile-long” queues at the hub for Ryanair and Jet2.com. Although he waited in security for 70 mins, he missed his KLM flight and is now demanding a refund.

Photographs show a massive queue for security snake through the departure terminal, with tourists pictured desperately checking their watches and phones and others with their arms folded.

Speaking to Birmingham Live, Sukh added: “For some reason, they didn’t call my flight until the sign showed ‘final call for boarding’. I was in the queue for around 70 minutes.

“I’m a regular flyer who visits my fiancée in Amsterdam at least every six weeks and I have never ever seen it this bad.

“I will be asking them to reimburse me. I used to get here an hour before take off to go to the check in desk and go through security and never had any issues.

“After seeing the news recently, I thought being here an hour and a half before take-off should be sufficient to get through only security as I had checked in online – but it’s clearly not.”

Sukh eventually had to rebook his flight to Holland and tweeted his frustration.

He said: “@bhx_official is a complete joke. In the security line for an hour and they call my flight out when the board says “final call”. End up missing the flight and having to rebook. Total joke.”

Another tourist said he waited nearly one hour and a half in security alone at the hub.

Jatinder Paul, a senior associate solicitor at Irwin Mitchell, said: “I would say it’s been about a mile today and it’s taking very long to get through security.

In a statement today, a Birmingham Airport spokesman told BirminghamLive: “Queues were long but managed and moving this morning as we helped many of the more than 14,000 customers booked to fly out of BHX today (Thu, May 12).

“As always, we ask customers to arrive at the airport at the time your airline advises – and to help us help you keep queues moving by removing any liquids, gels, pastes and electrical items from your bags before our security x-ray scanners.”