A hot tub in the cockpit and three bedrooms: Inside the Boeing airliner that has been converted into a plush home (with a working aircraft toilet)

A hot tub in the cockpit, a fully equipped kitchen and three bedrooms – welcome on board the incredible Boeing 727 that was refurbished into a luxury home.

These extraordinary pictures show the unique residence owned by Jo Ann Ussery, named ‘Little Trump’ after Donald Trump’s $16million 727 corporate jet. It was located in Mississippi and was positioned partially over a lake to give the impression it was taking off.

But the plane wasn’t completely transformed, it still had an original working aircraft toilet and the overhead bins were left in place for storage. 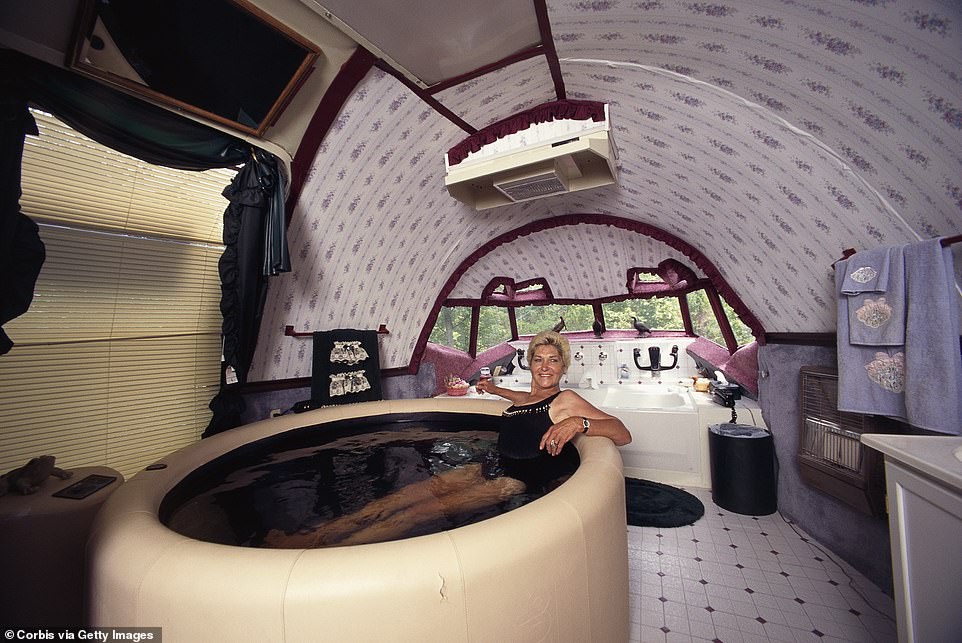 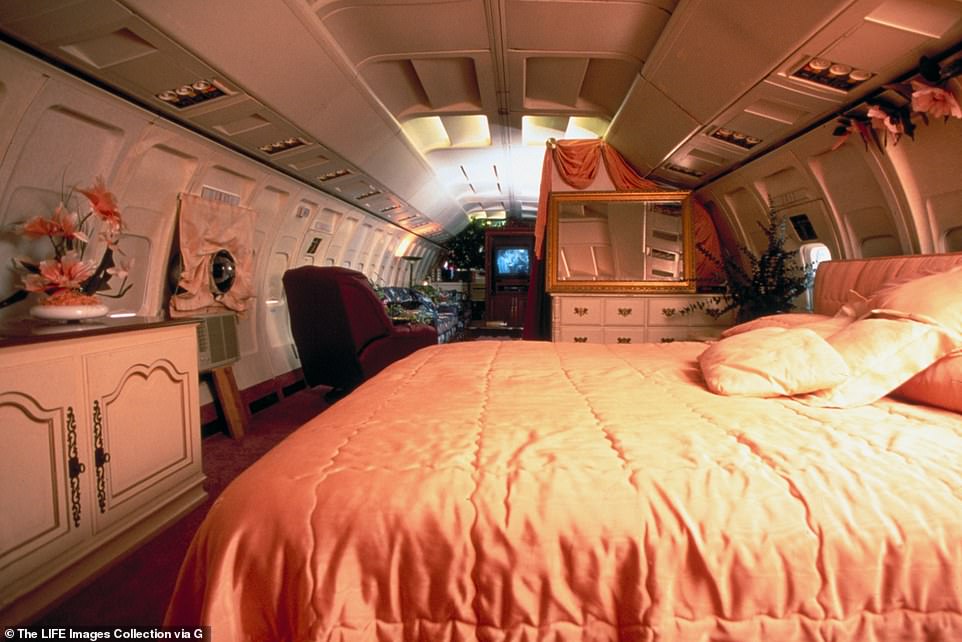 Jo Ann named the home ‘Little Trump’ after Donald Trump’s then $16million corporate jet – also a 727. Pictured is one of the three bedrooms 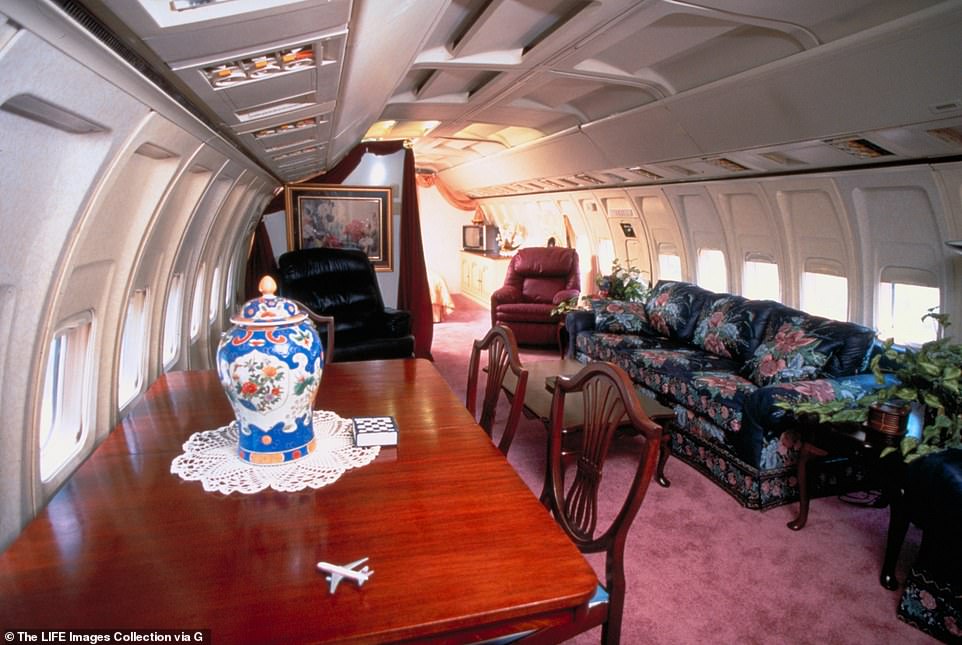 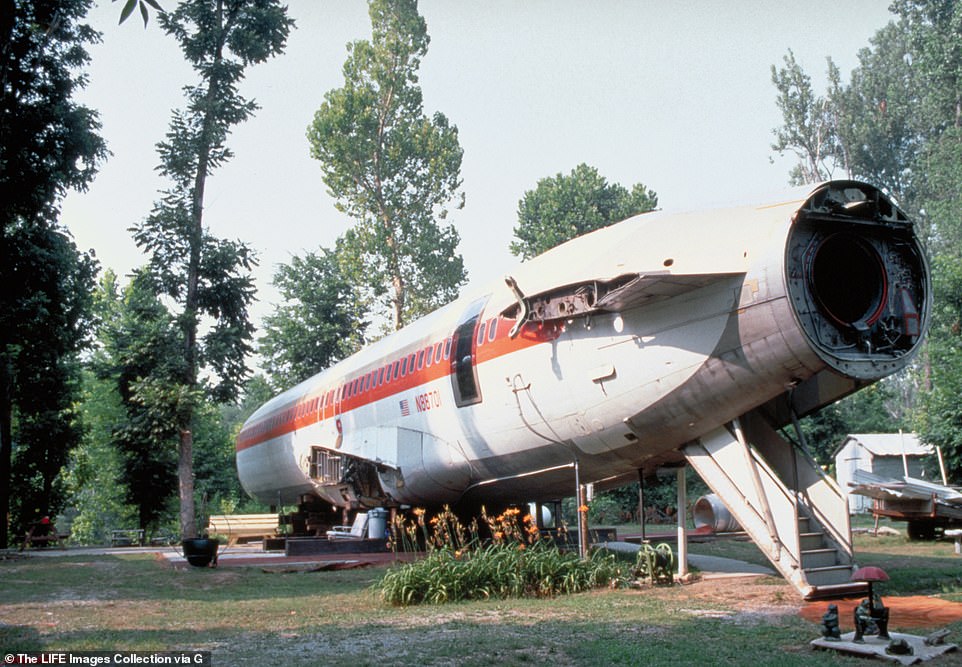 The plane, serial number 19510, had been the first Boeing 727 in Continental Airlines’ fleet and was in service for the carrier from May 1968 until September 1993

Jo Ann once told the Today programme: ‘It is so comfortable, it’s so neat, it’s well insulated and convenient, there is nothing bad about it.’

The plane, serial number 19510, had been the first Boeing 727 in Continental Airlines’ fleet and was in service for the carrier from May 1968 until September 1993.

After being stored in Texas it was moved to Greenwood, Mississippi, in 1994, where it was to be ‘parted out’.

At the same time Benoit, Mississippi, resident Jo Ann, then a 52-year-old hairdresser, was looking for a new mobile home after her previous one was destroyed in an ice storm. 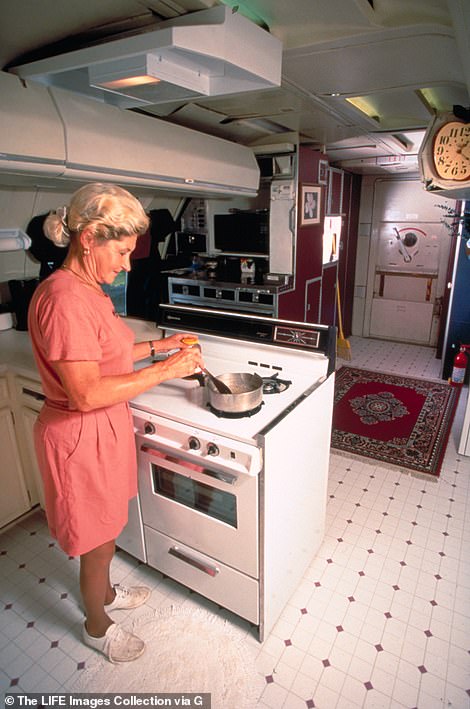 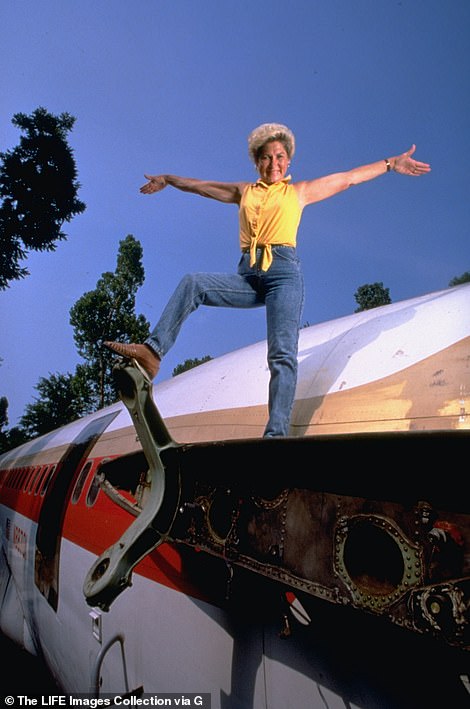 Jo Ann created a fully equipped kitchen inside the plane. She said: ‘It is so comfortable, it’s so neat, it’s well insulated and convenient, there is nothing bad about it’ 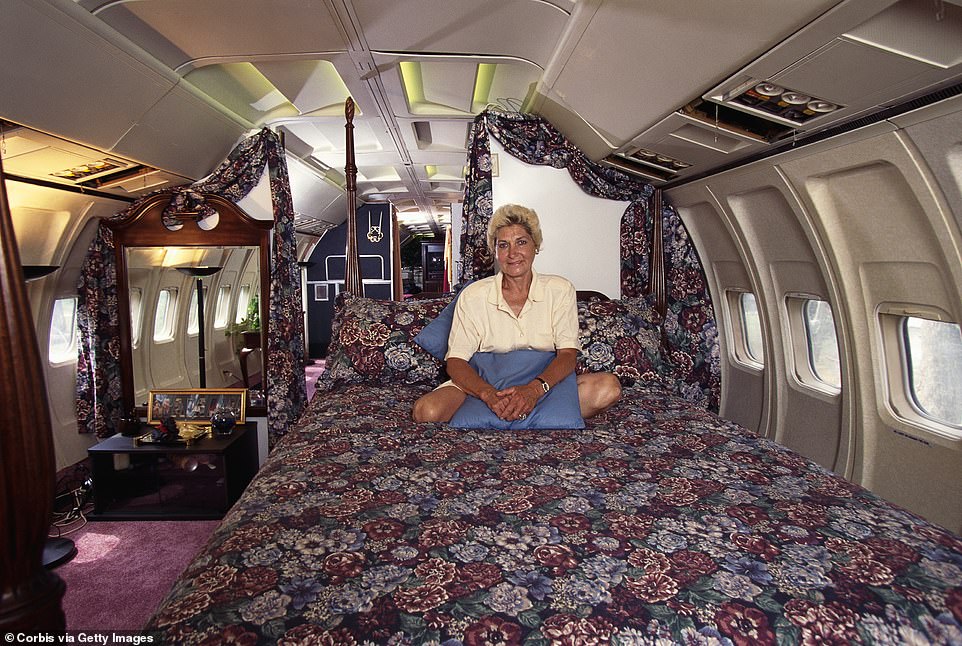 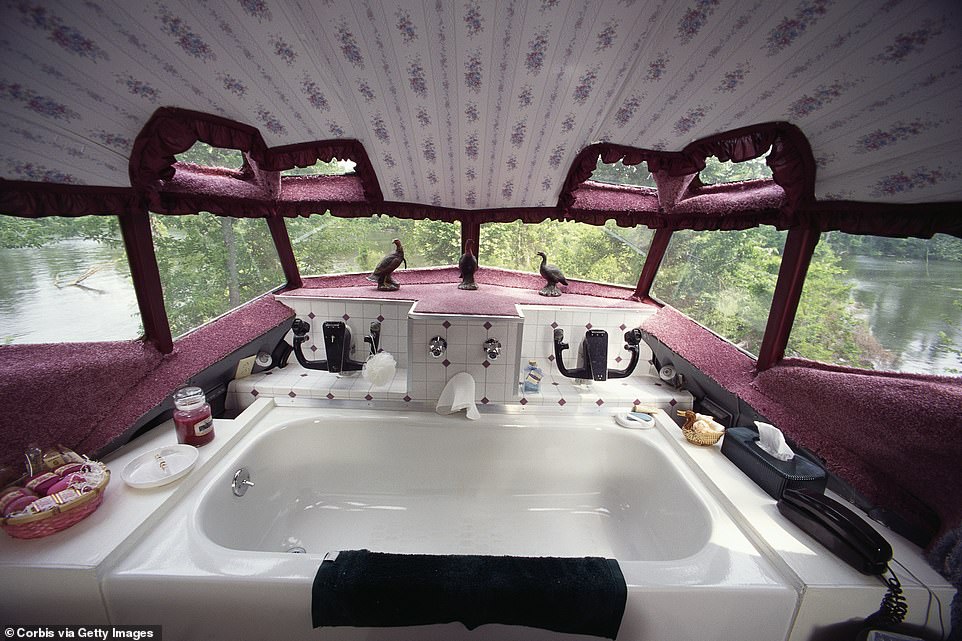 Original features that were retained included the cockpit control wheels, pictured next to the bath 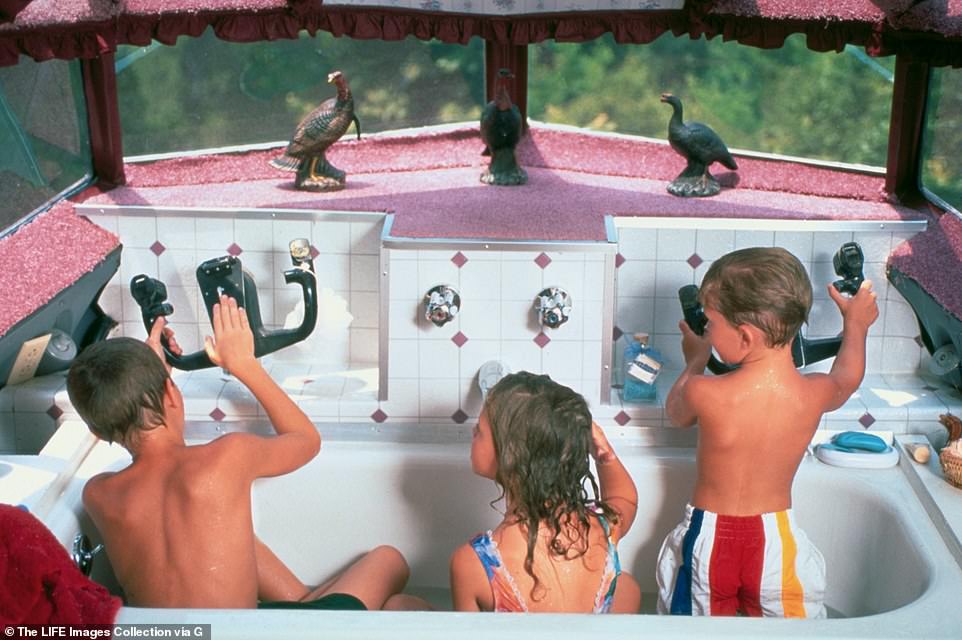 Jo Ann’s grandchildren Steven, Katelyn and Morgan take a bath in the former cockpit of the plane in 1996

Donald Trump had his own Boeing 727.

It was originally delivered to American Airlines before being converted into a private jet, which Trump bought in 1997.

When used by Trump, it was configured with seating for 24 people and included a master bedroom, a dining room, a galley, conference rooms, multiple lavatories and a bidet.

Trump put it up for sale in 2009 and it was sold in 2011 before being scrapped at Montréal–Mirabel International Airport in Canada in 2017.

Her brother-in-law, an air traffic controller, knew about the 127ft-scrapped plane and told her she should look into getting a retired airliner as a home.

According to Airport Journals, Jo Ann paid $2,000 for the plane and another $4,000 to a removal company to have it moved to her spot next to a lake in Benoit.

She then remodelled most of the home herself, which included installing floors, connecting electricity and plumbing and even setting up a phone line.

The seats were removed to create an 11ft-wide space, with 76 side windows and 10 cockpit windows flooding the fuselage with light.

She also managed to salvage interior parts from other retired 727s to add to her new plane.

Jo Ann spent around $24,000 (£19,235) on the renovations, creating a three-bedroom home with a living room and dining room, a laundry room and a master bathroom in the cockpit.

Original features that were kept in the converted airliner included the cockpit control wheels, to maintain an aircraft look, and the rear air stairs, which could be opened using a garage door opener.

Jo Ann moved into the converted home in April 1995 and stayed there until May 1999.

Eventually, a truck was hired to transport the plane to a different location.

The plan was for the aircraft to be opened to the public, but it fell off the truck and sustained ‘significant damage’.

And there, the trail regarding its fate goes cold… 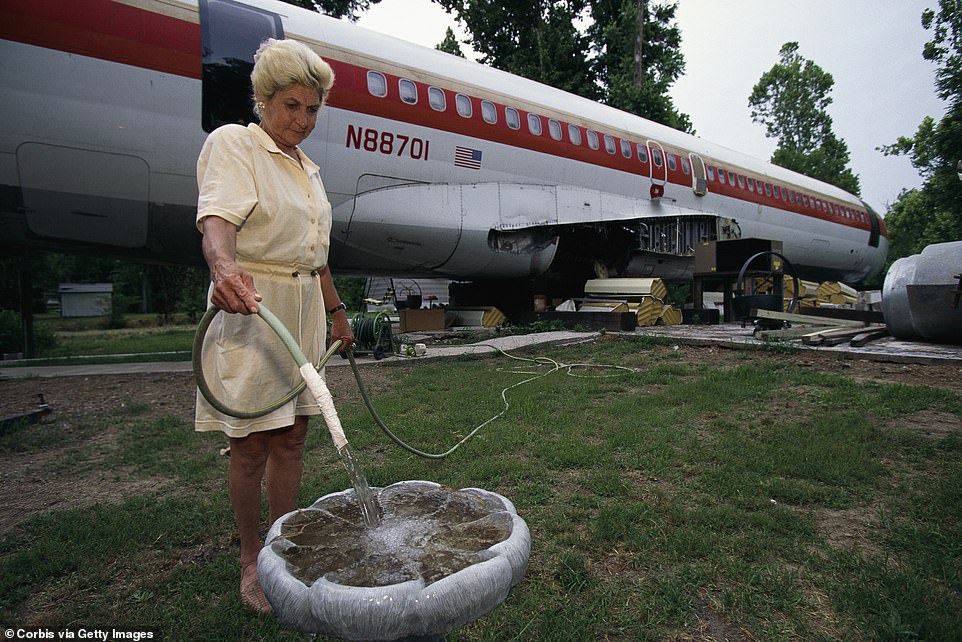 Jo Ann moved into the converted home in April 1995 and stayed there until May 1999. The plane was significantly damaged in 1999 when it fell off a transporter truck 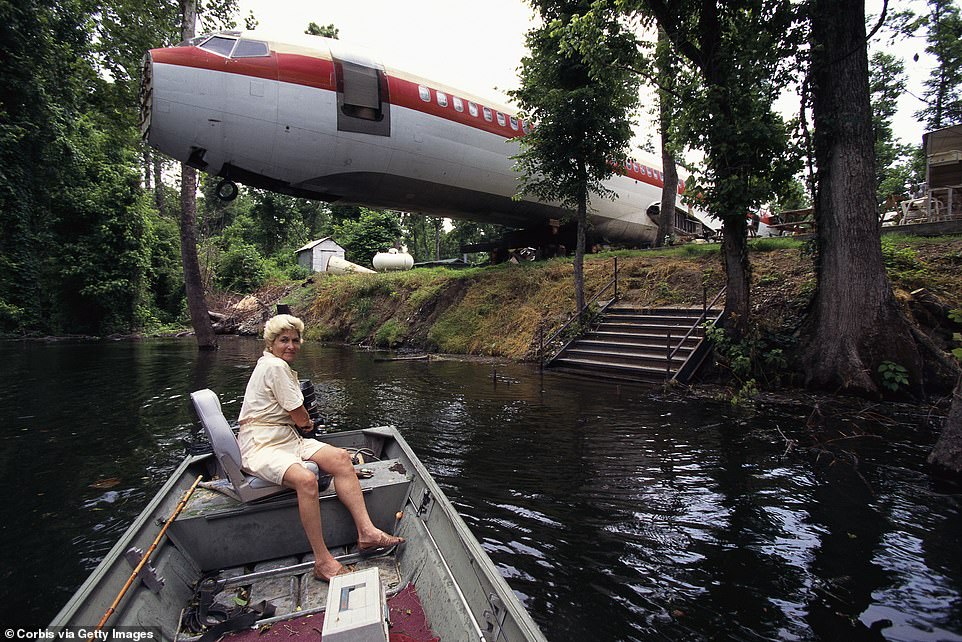 The plane was positioned over a lake to give the impression it was taking off. The home had a total of 76 side windows and 10 cockpit windows