It’s a vine romance: With British sauvignons and pinot noirs set for a corking summer, we pick the best estates to wine, dine and recline

Home-grown wines have been given the chance to shine this year as the lockdown turned off the taps from our usual sources around the globe.

As Britain ground to a halt, sales of alcohol jumped by 50 per cent as shoppers stocked up in preparation for the long evenings ahead. And with wine giants such as South Africa completely banning exports, now is the time to experiment with Sussex sauvignons, Welsh brut and Cotswold chardonnays, which are all the sweeter this year thanks to a succession of long, hot summers.

There are over 500 commercial vineyards in England and Wales (it’s still too cold to grow grapes in Scotland and Northern Ireland), so we’ve selected some of the best where you may soon be able to enjoy a tasting, buy a case or three, and even stay to make a weekend of it. 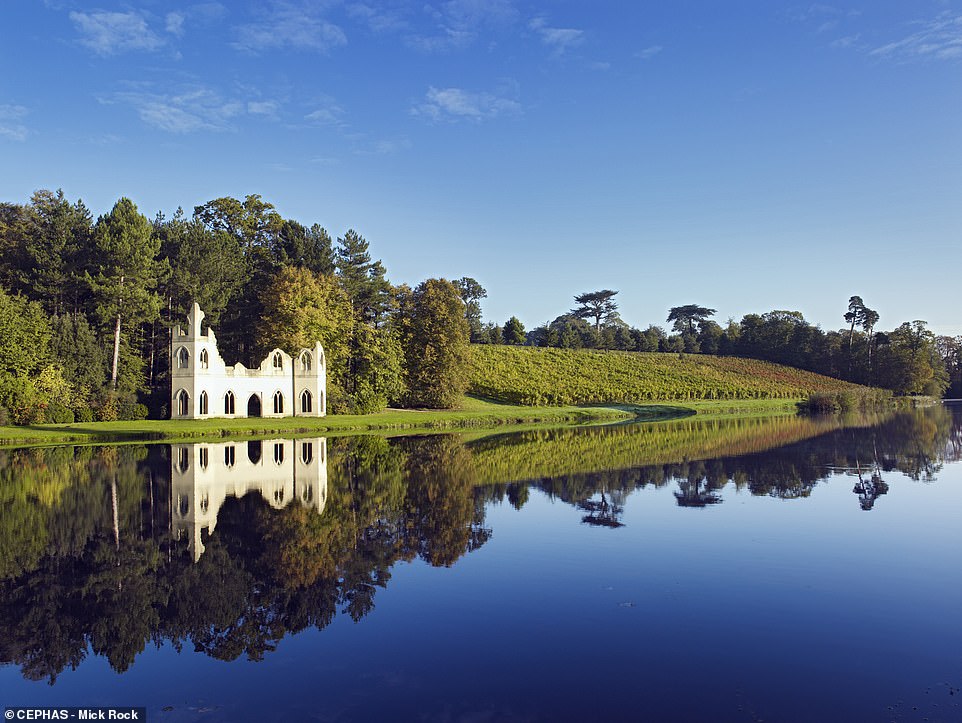 Soaking up the sun: Vines on the slopes leading down to the lake at Painshill in Surrey 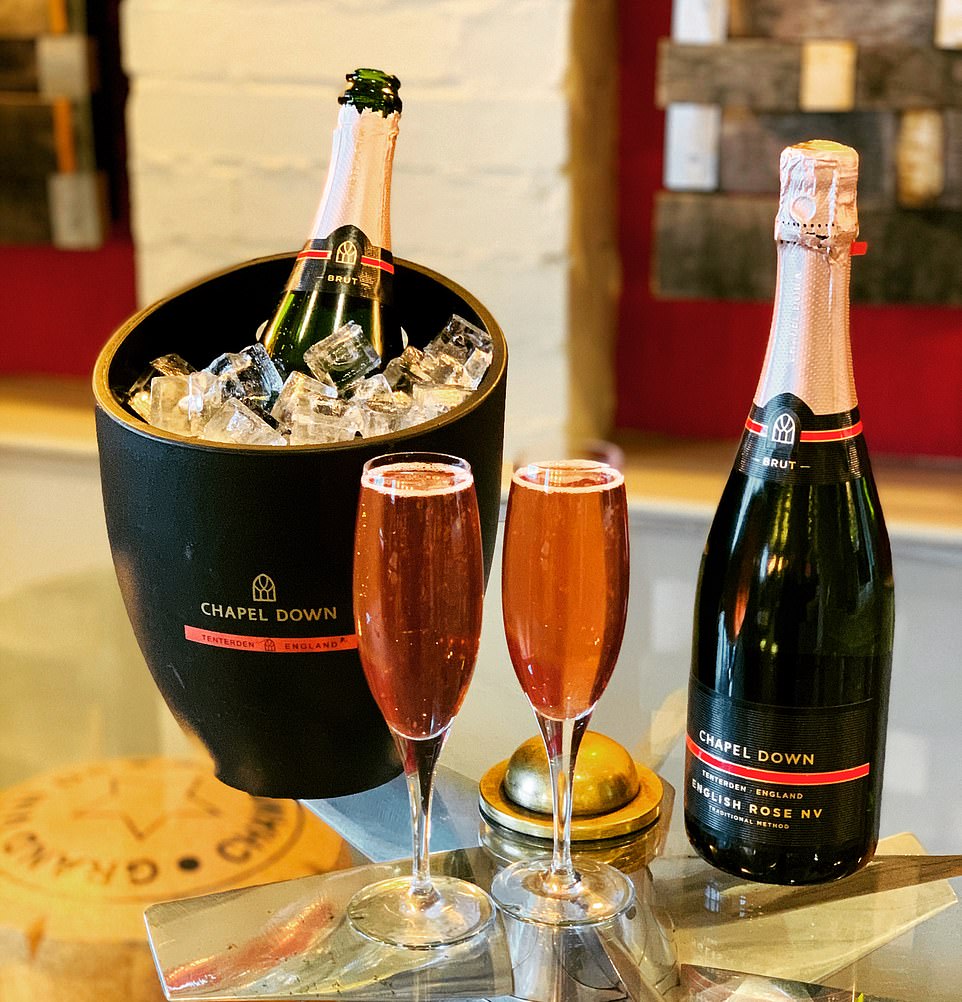 While the Romans first brought vines to Britain about 2,000 years ago, it was the Normans who successfully established viticulture – the harvesting of grapes – here. The Domesday Book, completed in 1086, records more than 40 vineyards around the South East where the soil and climate was best suited to grape-growing. Today the conditions are ideal for producing sparkling wines, so much so that French champagne houses such as Taittinger and Vranken Pommery have invested in land in the region.

WINE: The age of adventure in the 17th Century led to landowners across southern England planting vineyards on their estates. Charles Hamilton’s, set on a slope overlooking the lake and Temple of Bacchus at Painshill (painshill.co.uk) in Surrey, was particularly famous. While it is tiny by today’s commercial standards, it still produces fine sparkling rosé for £25 a bottle. Nyetimber in West Sussex (nyetimber.com) flies the flag for fine sparkling wines overseas and the Queen served it to her Golden Jubilee guests at Buckingham Palace. The aptly named Staying-In Case is £230.

DINE: Kent is awash with options, from Hush Heath in Staplehurst (hushheath.com) to Herbert Hall in Marden (herberthall.co.uk), but the biggest vineyard is at Chapel Down (chapeldown.com) on the outskirts of Tenterden, which welcomes 60,000 visitors a year. It is the official wine supplier to No 10 and the Boat Race and was the first English wine served at Royal Ascot. So where better to sip it than at The Swan Wine Kitchen, set in the vines and serving regionally sourced food on a £25 two-course set menu.

RECLINE: Rathfinny Estate, nestled amid the protective curves of the South Downs, was established in 2010 off the back of the successful financial careers of owners Mark and Sarah Driver. Its winery produces up to a million bottles of Sussex Sparkling wine annually, and its beautifully restored historic flint barns are available for B&B or hire. Double rooms from £140 a night (rathfinnyestate.com). 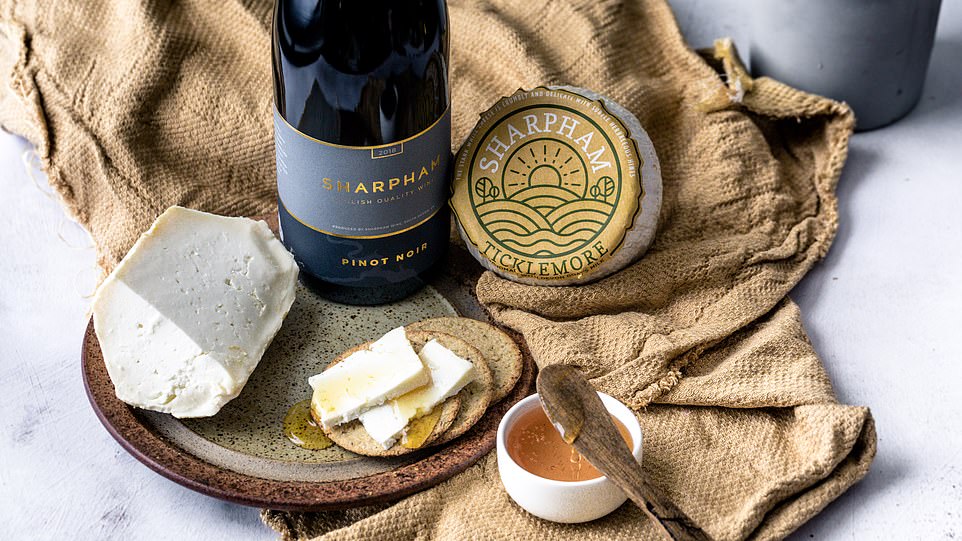 Perfect partners: Sharpham’s wine and its unpasteurised cheese, which comes direct from Jersey cattle on its own farm

The region’s temperate climate and sheltered south-facing slopes provide a hospitable environment for vines. While the area accounts for just 11 per cent of the UK’s production, the results pack a punch and the popularity of wine tours in the area led to Cornwall being dubbed the ‘California of the UK’.

WINE: Former RAF pilot Bob Lindo began putting down vine roots in the Cornish soil in 1989 after a midair collision ended his military career. The Camel Valley Vineyard (camelvalley.com), which he and his wife Annie have built up since 1989, has become one of Cornwall’s great business successes, renowned for its rosé. The first UK producer to be awarded a Royal Warrant, Camel Valley’s Pinot Noir Rosé Brut, costing £29.95, is served to guests of Prince Charles.

RECLINE: It was the fifth generation of family farmers on the Aldwick Estate, outside Bristol in the Mendip Hills, who in 2008 decided to plant vines. Family and friends remain at the heart of wine production, with a small team hand-pruning and picking the harvest. Well-appointed king-size bedrooms make the estate the perfect setting for a country break, from £95 a night (aldwickestate.co.uk). 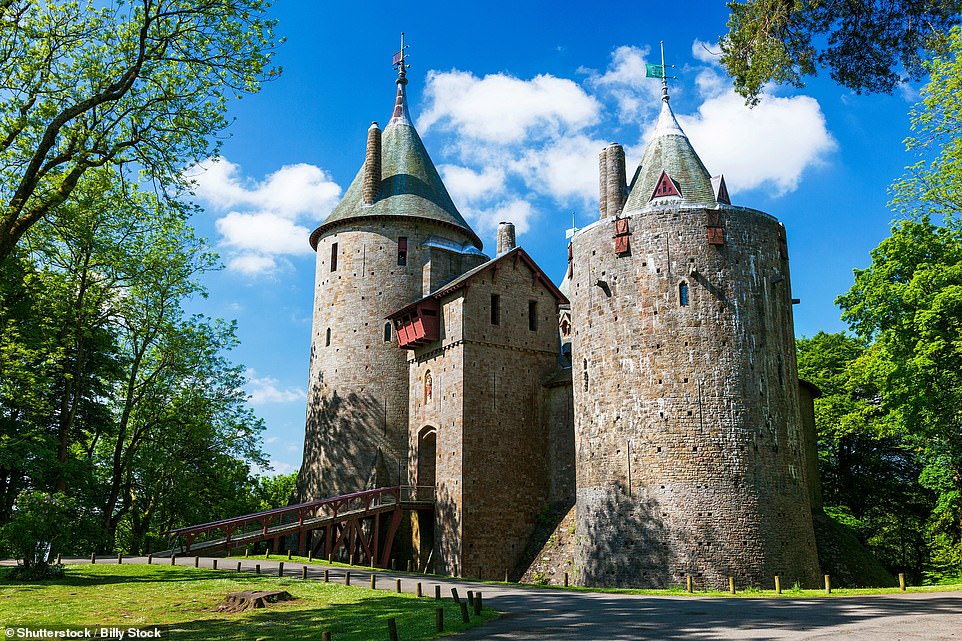 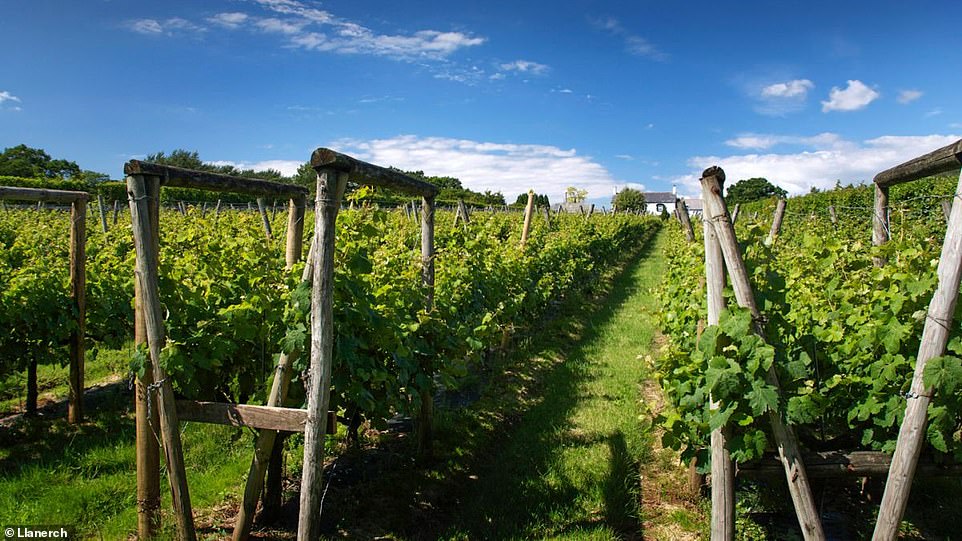 Llanerch, a 15-minute stroll from the turreted Hensol Castle, is a hotel, vineyard, restaurant and cookery school

From the 1870s to the start of the First World War, Wales produced the only commercially grown wine in Britain. This was all down to the Marquis of Bute, who rebuilt Castle Coch on the outskirts of Cardiff and established a vineyard in its grounds. The wine was well received until war led to a hiatus in vine-growing until the 1950s, when commercial viticulture was reborn.

WINE: The mountains of Snowdonia provide a stunning backdrop to the Gwinllan Conwy vineyard (gwinllanconwy.co.uk), where vines have been carefully chosen to suit the tough climatic conditions. Each of the five wines produced here is distinguished by a pattern on its label taken from the Tudor buildings in nearby Conway. The Rondo 2018 red £18 is the ideal accompaniment to Welsh lamb or ‘cawl’.

DINE: White Castle Vineyard (whitecastlevineyard.com), in the beautiful rolling countryside of Monmouthshire, was a retirement project which became a full-time job and thriving business for former postie Robb Merchant and his wife Nicola. They produced Wales’s first fortified wine, named 1581 after a listed Tudor barn on the vineyard, alongside reds, whites and rosés. Cheese, meat or fish platters are served in the Cellar Door cafe from £12 to £15 per person.

RECLINE: Llanerch, a 15-minute stroll from the turreted Hensol Castle, is a hotel, vineyard, restaurant and cookery school. It is also just a nine-mile drive from Castle Coch. Centred on a whitewashed farmhouse building, its sparkling, white and rosé Cariad products are testament to the strength of today’s Welsh wines. Double rooms in the farmhouse or around the adjacent courtyard cost from £95 a night (llanerch.co.uk). 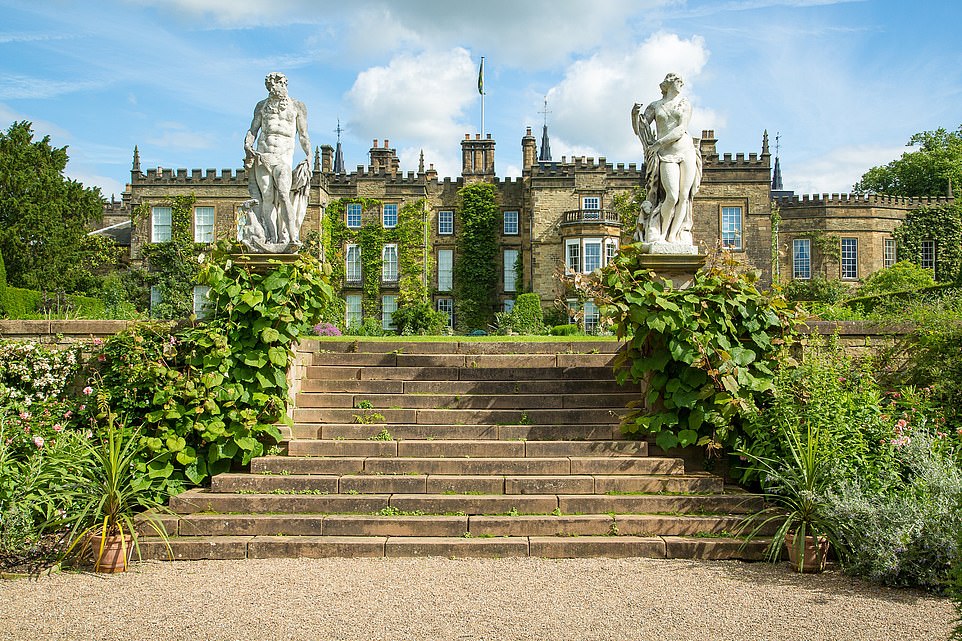 In the late Middle Ages, monastic viticulture played an important part in wine production. Across Central England, where the climate was temperate, monks tended and pressed the grapes alongside their religious duties. The vineyards were grubbed up following the dissolution of the monasteries, but the area is now home to a new generation of commercial and family-run enterprises.

WINE: Derbyshire’s Renishaw Hall vineyard (englishwineproject.co.uk) has a lot more going for it than just wine. Attached to an imposing stately home and sprawling gardens there is also a museum, which tells the story of the Hall’s eccentric inhabitants, including poet Edith Sitwell. The bright salmon-pink Walled Garden Rosé, at £13, is a delicious souvenir.

DINE: Wroxeter Roman Vineyard (wroxetervineyard.co.uk) lies next to the excavated site of the ancient Roman city of Uriconium. The current vineyard was planted in 1987 but there’s evidence of vines grown on the site in Roman times. A four-hour vineyard tour, tasting and lunch for two costs £69.75.

RECLINE: You can eat, sleep, taste and trek at Three Choirs Vineyards in Gloucestershire. Seventy-five acres of undulating vines produce award-winning pinot noirs and sparkling cuvees. You can stay in oak or cedar wooden lodges, with floor-to-ceiling windows and verandas overlooking willow tree-fringed ponds and surrounded by vines, from £154 a night for two (three-choirs-vineyards.co.uk).

From the sandy coasts of Norfolk and Suffolk to the dense clays in the heart of Essex, East Anglia produces some of Britain’s best still and sparkling white whites. It’s one of the driest and sunniest parts of the country, and sea breezes are the perfect antidote to vine disease. Vineyards here produce more than half the bacchus grapes in Britain, creating a wine that is often compared to sauvignon blanc.

WINE: The Chet & Waveney Valley Vineyard (chetvineyard.co.uk) in Norfolk is run by the fourth generation of the Hemmant family. Fred Hemmant, the present owner’s great-uncle, used his own horses to give the soil an enviable organic boost. The stables have now been converted into tasting rooms but the organic legacy helps produce a range of award-winning wines. One standout bottle is the 2018 Skylark Brut at £20.

DINE: The ancient estate of Wyken (wykenvineyards.co.uk) is a 1,200-acre farm with a seven-acre vineyard in Suffolk. A pleasant walk takes visitors from the vines through ancient woodland over Hare Meadow to the Leaping Hare Restaurant. Lamb and beef from local farms, and venison, pheasant and partridge off the estate make for a truly locally sourced menu. Three courses from £22.

RECLINE: Home to Bardfield Vineyard, the Great Lodge estate in north-west Essex was once owned by Anne of Cleves – the fourth wife of King Henry VIII – and its medium-dry white bears her name. Planted in 1989, rows of pinot noir, bacchus and seyval blanc vines surround a Grade I listed barn. Around the courtyard, three newly converted barns provide stylish B&B accommodation from £90 per night (greatlodge.co.uk). 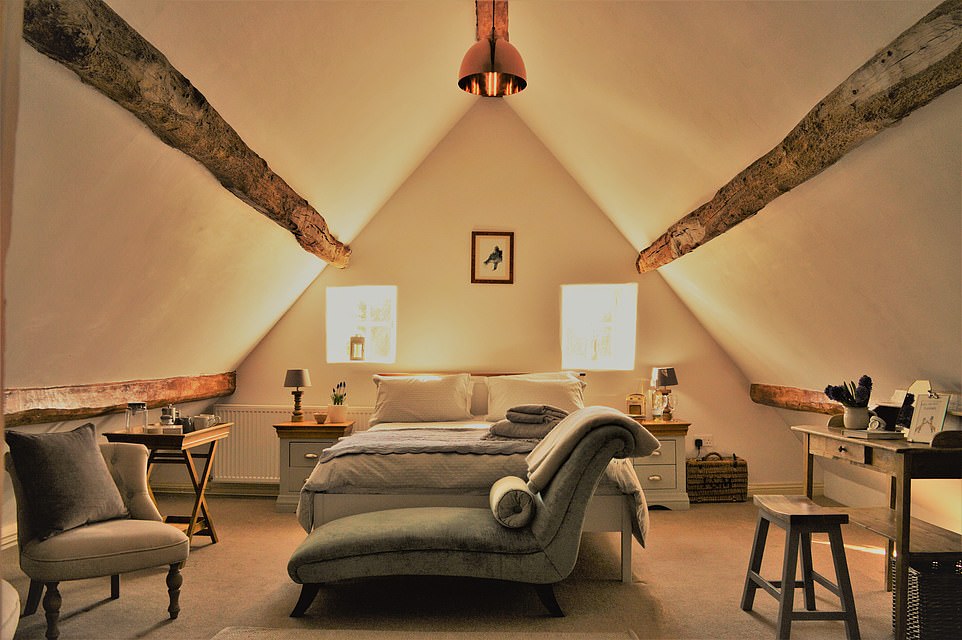 Northern star: Ryedale in Yorkshire has rooms looking out across the vineyard from £95 a night

Growing vines in the North of England is still a struggle, but the warm summers of recent years have produced some fine Yorkshire wines. It’s not just global warming that has played a part, but the creation of new grape varieties capable of ripening in often cold and wet environments – and hardy wine-growers undaunted by the conditions.

WINE: Up and running for 35 years, Leventhorpe Vineyard is the grandfather of the Yorkshire wine trade. Within the Leeds city boundary on a south-facing slope leading down to the River Aire, it has produced truly memorable wines. Celebrity wine writer Oz Clarke described Leventhorpe’s Madeleine Angevine, costing £9.50, as a ‘once tasted, always remembered kind of wine’.

DINE: Yorkshire Heart (yorkshireheart.com), in the lovely village of Nun Monkton, is one of two vineyards in the far north of the county. Aptly robust Yorkshire reds are the recommendations here, and there’s even a sparkling red. Wholesome light lunches, including fish platters, eggs benedict and ploughman’s, are served in the winery with typical prices of about £8.50 per person.

RECLINE: Ryedale is the most northern commercial vineyard in England, set in a former cowshed in the picturesque Yorkshire Wolds. Owners Stuart and Elizabeth Smith conduct tours and tastings, while the Grade II listed farmhouse has rooms looking out across the vineyard from £95 a night (ryedalevineyards.co.uk).

Tags: best, the, to, UK, vineyards, wine
You may also like:
Recent Posts