The 15 best places to visit in the UK in 2023 named by Time Out, with EASTBOURNE No.1, followed by Birmingham and Cardigan in West Wales

Eastbourne has been named by Time Out as the best place in the UK to go on a day or overnight trip in 2023.

It tops a ranking of 15 places thanks in part to ‘becoming an established hub for creatives’.

Huw Oliver, Time Out’s UK Editor, says: ‘Rather than the usual hotspots, we want to highlight places, many of which are ludicrously underrated, which people don’t automatically think to go to.’ Scroll down for the full list, presented in reverse order… 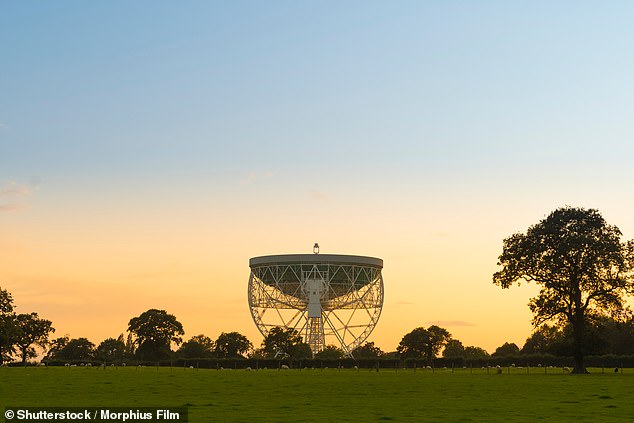 Stellar: Cheshire’s Jodrell Bank Observatory (above) is one of the county’s highlights

The star attraction in Cheshire is the Jodrell Bank Observatory and ‘so worth the schlep’, says Time Out, which adds that other delights include Macclesfield’s ‘beautiful cinema-turned-food-hall the Picturedrome’ and the boutiques that line the half-timbered galleries known as The Rows in Chester.

Diary ready? Put music festival Bluedot (July 20 to 23) in it, because ‘it takes place in the shadow of the Lovell Telescope [at Jodrell Bank] and the line up is often as spectacular as the setting’, says Time Out.

It adds: ‘You’d be a fool not to spend a full weekend in a region that most people know for its Real Housewives.’ 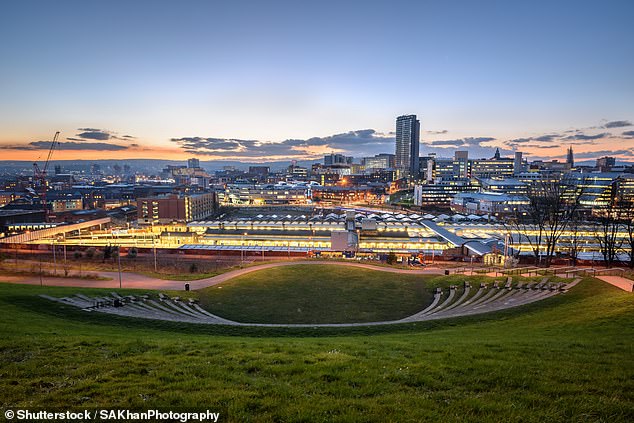 Time Out says of Sheffield: ‘The combination of being the greenest city in the UK – with 250 public parks and 52 square miles of national park – along with its increasingly vibrant food, drink and arts scenes, make it a perfect blend of bustling city break and serene escape.’

A perfect day there? Time Out says: ‘Kick off with New Zealand-inspired breakfast at Tamper Sellers Wheel, then pick up a coffee at Mow’s, catch an exhibition at Site Gallery and head on a bar crawl around Kelham Island.’ 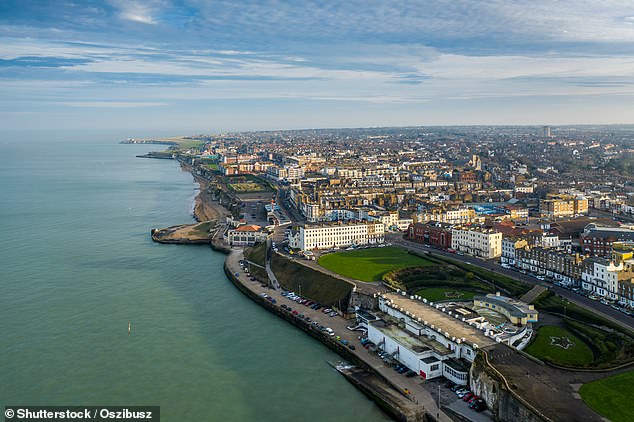 Margate has a ‘respected position in the art world’, says Time Out, explaining: ‘It’s where Tracey Emin has chosen to open her new art school and where you’ll find exciting artist-owned galleries like Quench and Hotel Michele. But it’s not all about the art.’

But the guide stresses that ‘it’s not all about art’, adding: ‘Margate’s burgeoning restaurant scene is unrivalled for a town of its size. Critically acclaimed restaurants like Angela’s and Bottega Caruso have been joined by newer venues like Sargasso and Fort Road Hotel. And while Margate’s tourists have previously stuck to the Old Town, Cliftonville was recently named one of the world’s coolest neighbourhoods by Time Out.’ 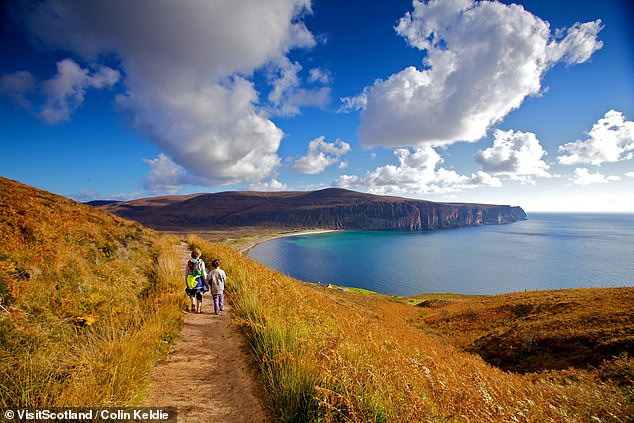 Time Out describes Orkney (above) as an ‘otherworldly’ archipelago

Orkney’s merits? ‘Britain’s largest concentration of prehistoric monuments is worth a trip alone,’ says Time Out.

Take note of Time Out’s ‘perfect day’ on the ‘otherworldly’ archipelago: ‘Start your day at Archive Coffee in Kirkwall, then swing by the Orkney Distillery for a Kirkjuvagr gin tasting. After that, hop on the ferry from Houton to Hoy and traverse the hills towards the Old Man sea stack. If the weather’s kind – and by kind in these parts, we mean brooding skies and crashing waves – you’ll enjoy one of Scotland’s most dramatic scenes.’ 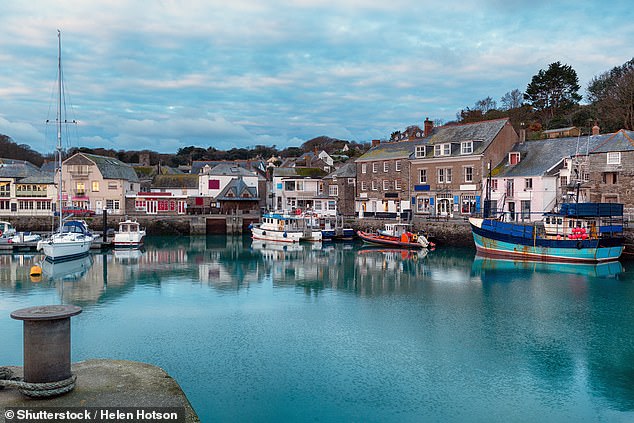 Time Out’s appetite is whetted by the likes of Prawn on the Lawn, The Pig at Harlyn Bay, and four Rick Stein eateries.

The perfect day must obviously include a pasty somewhere – try Stein’s Deli, says Time Out, before ‘saying hello to the majestic creatures at the National Lobster Hatchery’.

Time Out says: ‘It’s been 15 years since Liverpool was named the European Capital of Culture, but its legacy endures in all the bars, restaurants and arts spaces that have opened up across the city over the past decade. And 2023 might just be the best time to visit, as the locals will be pulling out all of the stops with Liverpool set to host Eurovision.’

The guide notes that Liverpool Council has confirmed plans to open a Eurovision Village on the city’s renowned Pier Head.

Perfect-day venues include Chapters of Us for brunch, The Beatles Story museum and the Everyman Theatre. 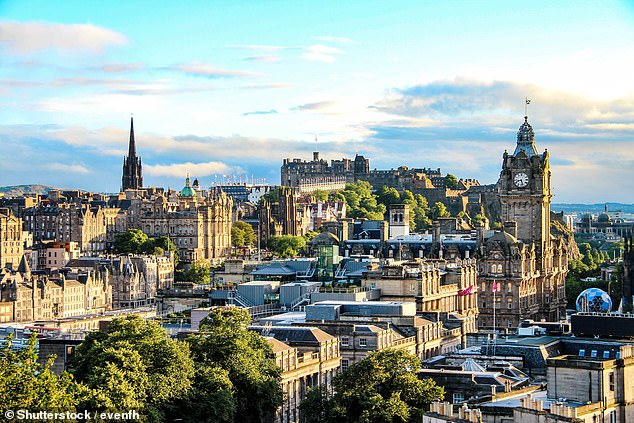 Time Out has a huge soft spot for Edinburgh, having named it the best city in the world 2022, thanks to having ‘an ancient castle slap-bang in the city centre, loads of green space and being bloody beautiful’.

What is there to look forward to in 2023? ‘A ton of nice-looking hotel openings’, says Time Out. It urges visitors to investigate W Edinburgh and the forthcoming Gleneagles Townhouse.

A perfect day? It has to start with ‘a windswept hike up Arthur’s Seat where you can take in spectacular views of the city’s skyline’, says Time Out. To end it, ‘catch a gig at the legendary Sneaky Pete’s’. 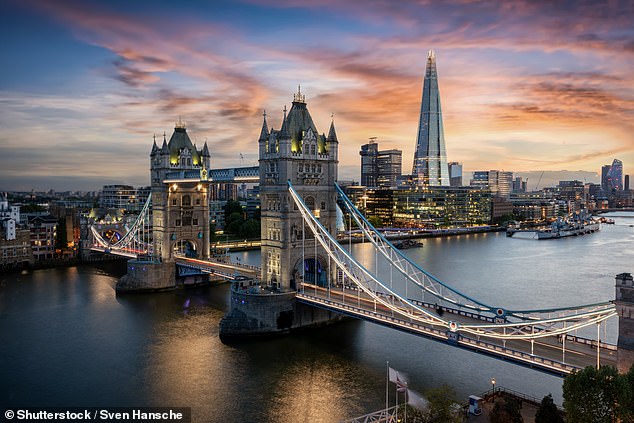 Next year in London, the first-ever festival from clubbing institution Fabric will open

Time Out admits that there are tens of thousands of reasons to visit the UK capital but that next year there’s an extra big one – Exodus, the first-ever festival from ‘clubbing institution’ Fabric.

The Guide says that a perfect day in London should comprise lunch at Borough Market, a stroll along the Southbank to watch the skateboarders and gazing at free art at the Tate Modern.

A wander along the beaches at Poole (above) should be on your perfect-day-in-Dorset itinerary, says Time Out

Dorset, points out Time Out, doesn’t just do ‘quaint towns and picture-perfect coastlines’, it also does ‘exciting independent music festivals’.

The guide reveals that in 2023 the county ‘will be home to End of the Road (August 31 to September 3), a wide exploration of everything from post-punk and experimental folk to dance DJs, and We Out Here (August 10 to 14), an underground electronic and contemporary jazz festival curated by BBC Radio DJ Gilles Peterson’.

The perfect day? Wander along beaches in Poole, says Time Out, and then catch a ferry to Brownsea Island to spot rare birds such as spoonbills and avocets. 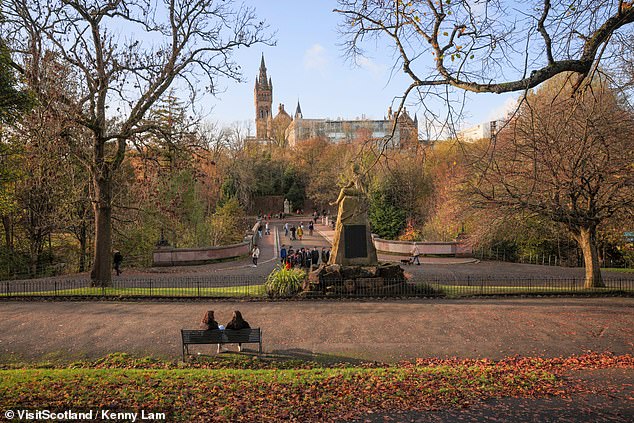 Reasons to visit Glasgow in 2023, says Time Out, include a ‘first-class vegan food scene led by the likes of Mono, Sylvan and The Glad Café and cultural treasures such as freshly refurbished art gallery the Burrell Collection in Pollok Country Park’.

In addition, there’s Great Western Road in the West End, named as 2022’s coolest street in the UK by Time Out thanks to harbouring ‘a bit of everything from fine dining to basement gigs in one short stretch’.

Musts for a perfect day in the city include ‘chilli toast at Morning Glory, before a walk through Glasgow’s newest nature reserve the Claypits’. 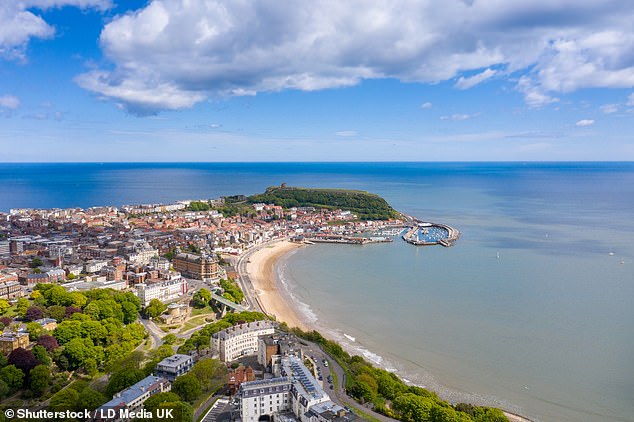 Scarborough’s famous fair will be revived in 2023, reveals Time Out

Scarborough is ‘thriving’, says Time Out, noting that it’s a destination for craft beer fans thanks to micropubs such as The Stumble Inn and Quayside Bar, and that the famous Scarborough Fair will be revived in 2023 (April 8 to May 29).

A perfect day itinerary would include a brew from Yay Coffee on the Esplanade, a walk through the recently restored South Cliff Gardens and an ‘experimental’ British-Asian dinner at the Haus of S&M. 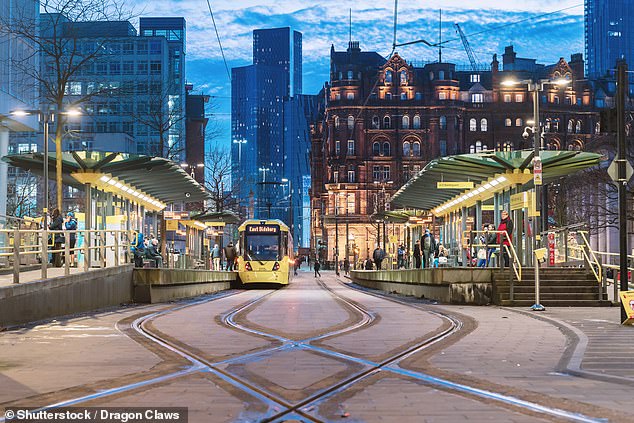 Manchester is ‘fun’, says Time Out, predicting that 2023 will be ‘one of the funnest years to visit, ever’. Why?

The guide explains: ‘In February, the Manchester Museum will finally reopen following a huge £15 million transformation, while in June the brand-new Factory International will host “You, Me and the Balloons”, the largest-ever immersive exhibition from cult artist Yayoi Kusama. Later in the year, it will also be putting on a stage-show adaptation of The Matrix directed by Danny Boyle.’

A perfect day in Manchester, concludes Time Out, would include a stroll around the Northern Quarter, with a coffee and pastry at Ezra and Gil. 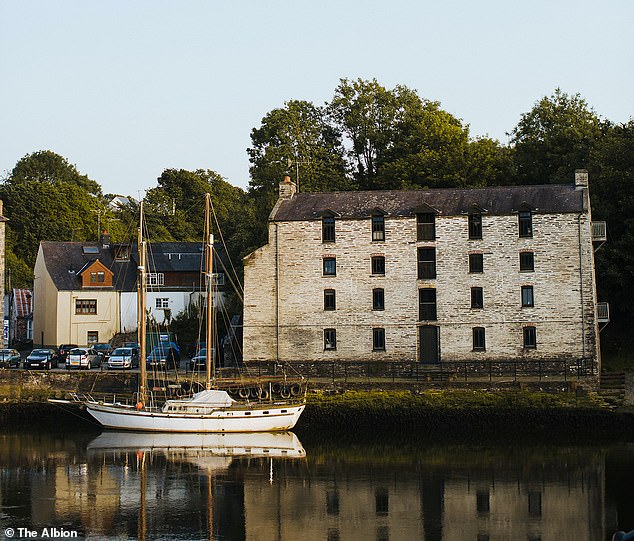 Hotel Albion Aberteifi (above) is one of the best things about Cardigan, says Time Out

‘West Wales remains criminally underappreciated and charming Cardigan might be its finest spot,’ Time Out declares.

It explains: ‘This is an old-fashioned Welsh market town with a dazzling creative streak, a beautiful place with a fascinating history.’ 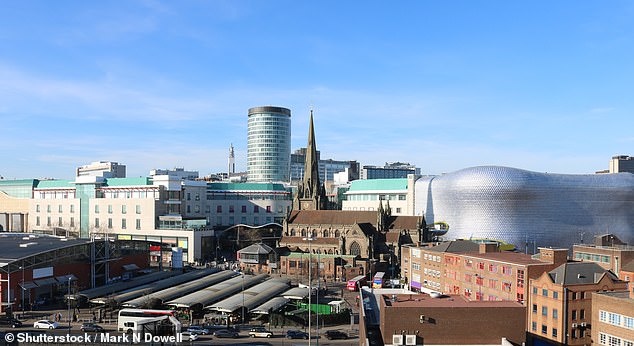 Birmingham earns its silver-medal spot thanks to being ‘one of Britain’s most underrated food destinations’.

Time Out notes, for starters, that three Birmingham eateries make the Good Food Guide 2022’s list of the 20 buzziest restaurants in the UK – Carters of Moseley, The Wilderness, Grace & Savour at Hampton Manor.

Time Out adds: Keep an eye out for chic French restaurant Orelle, on the 24th floor of the city’s shiny new 103 Colmore Row building. Views. For. Days.’ 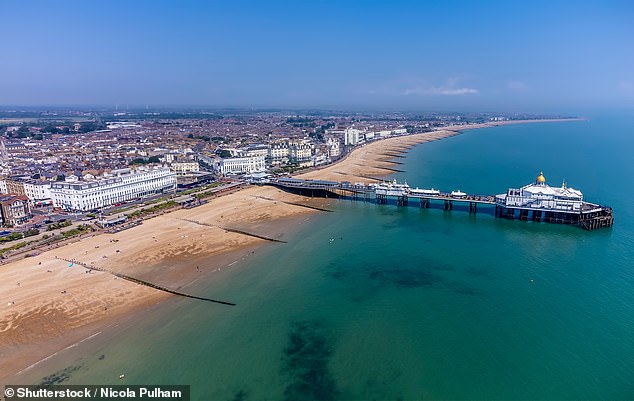 ‘Eastbourne is well on its way to becoming an established hub for creatives,’ says Time Out

‘This coastal town might conjure up images of OAPs on coach holidays, pesky pebbles in your jelly shoes and hordes of tennis fans at Rothesay International,’ says Time Out, ‘but Eastbourne is well on its way to becoming an established hub for creatives.’

It points out, for example, that ‘eye-catching’ gallery Towner Eastbourne has been selected as the official host of the 2023 Turner Prize, to tie in with the venue’s centenary year.

The guide also recommends the Eastbourne Walking Festival (September 16 to 25), grabbing a coffee at Beanzz Coffee & Kitchen and taking in the views of Beachy Head at the seafront.

To come up with the UK Best Places to Visit 2023 list, Time Out’s network of local editors selected and ranked the destinations ‘based on their current thriving food, drink and arts scene’. For more visit www.timeout.com/uk/things-to-do/best-places-to-visit-in-the-uk.