Gilda Siena likes to talk – so much so she is known among her guests as “the chatty woman”.

In the decade since she bought a 19th-century building once inhabited by Venetian nobility in the Salento area – at the southern tip (the heel) of Italy’s Puglia region – and made it into boutique hotel Palazzo Siena-Home & More, this aspect of her personality has led to many friendships.

Proof of the affection felt towards her can be gleaned from the message book and thank you letters and cards received from around the world. Among her favourite guests are the Swiss man who she nicknamed “James Bond” for his flash white sports car (which looked a tad out of place in the hamlet of Specchia Gallone, especially alongside her Mini Metro); the interior designer from London; the couple who asked her to witness their wedding; and the six lesbians from Canada who she hung out with by the pool, chatting and laughing.

“Those women were such great fun,” said the 61-year-old. “The most beautiful thing about this job is getting to know people.”

But this year, owing to the coronavirus pandemic, there are few people to chat to.

“It is a strange year, and sad to see something that was so lively now so quiet. We were like one big family,” said Gilda, whose two daughters help her manage the business when they can. 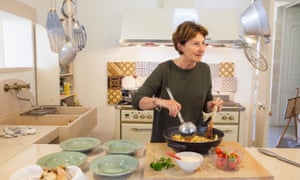 Although tourism has been returning to Italy since the country reopened its borders in early June, and the coronavirus situation is relatively under control, bookings are drastically down. The increase in the number of Italians holidaying at home has done little to diminish the impact of the loss of income from foreign visitors. Italy is the fifth most-visited country in the world, and tourism usually accounts for 13% of GDP, or about €230bn a year.

“We were fully booked for the season by January: many people were returning guests, but then they cancelled their bookings because of the pandemic,” said Gilda.

For Palazzo Siena, as with other hotels that have reopened, trying to stay afloat has meant reducing prices. The season began late because of the national lockdown. The pricing strategy prompted a trickle of bookings in June and July; August is looking more promising. Another selling point is that Salento and the wider Puglia region have been fairly unscathed by Covid-19, with fewer than 5,000 confirmed cases since the onset of the pandemic in February.

The majority of Palazzo Siena’s guests usually come from the UK, the US and Canada. This year, the foreign visitors who have made the journey so far are from neighbouring countries.

Austrian Sylvia Fragapane, her Italian husband Fabio, and their daughter drove 14 hours from their home in Switzerland and booked a three-night stay at Palazzo Siena. It was the family’s first visit to Puglia.

“We chose Puglia because there are few Covid cases,” Sylvia said. “And we were careful when picking a place to stay – we could tell Palazzo Siena was a beautiful home to stay in, nice and spacious and unlike normal hotels.” 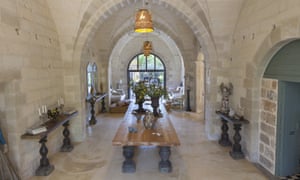 Palazzo Siena is somewhat of an oasis amid a pandemic. The building, once owned by a family of rich merchants, had lain abandoned since the 1960s before Gilda caught wind that it was for sale during a conversation with a fellow diner at a pizzeria in nearby Otranto, while on holiday there in 2010.

“It was destroyed, but as soon as the door opened it hit me how beautiful it was,” said Gilda, who had never undertaken a project of its kind before. After a brief tussle with another keen buyer, the property was hers.

It took a year to restore. Customers soon started to arrive, mostly by word of mouth. The nine airy rooms are impeccably furnished, retaining the building’s original features. Guests fall asleep to nothing but the sound of chirping crickets and wake up to the sound of church bells. Centuries-old vines cover the ancient colonnade in the vast garden, which is home to fig, walnut and almond trees. The vegetable patch provides ingredients Gilda uses in local dishes, including pumpkin flower risotto with burrata, the mozzarella-like cheese from Puglia, and courgette tart. While there’s no restaurant as such, meals can be ordered in advance and served either on the terrace or in the dining room.

The pool – which is cleaned by the same person who cleans the pool at the holiday home of actress Helen Mirren in Miggiano, about a half hour’s drive away – offers respite from the afternoon heat.

“This is a holiday for people who want peace and to relax,” said Gilda. “Many wake up early, to swim and do some exercise. There are lots of quiet spots to read. There are walking and bike trails nearby. People don’t have to think about dressing up or putting on makeup. For me, this is the real Salento – simplicity.”

Specchia Gallone is a neat hamlet of fewer than 500 people, with little entertainment beyond a bar and restaurant. It can be reached by car from Brindisi airport, or by once-daily bus from the baroque city of Lecce, from where you can catch a train to the nearby town of Poggiardo. However, a car is essential for exploring the pristine beaches and remote villages of the Salento. 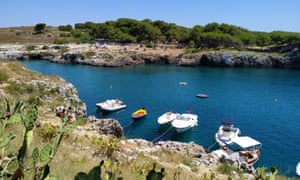 The closest beach to Specchia Gallone, a 20-minute drive away, is Porto Badisco, an inlet with a small sandy beach and rocks from which local youth plunge into the clear water. As legend would have it, the Trojan hero Aeneas made a stopover in Porto Badisco after his escape from Troy.

On a recent Thursday morning, the beach was packed, with little social distancing in evidence.

The beachgoers are mostly locals and other Italians on holiday.

“I usually like to travel abroad, but this year I’m discovering Italy more,” said Claudio Ressa, an IT specialist from Milan, in Lombardy, the region worst-affected by coronavirus. “The situation in Milan was so heavy. But here I feel relaxed, as there are not so many cases. The people are also welcoming.”

More breathing space can be found in Alimini, north of Otranto, where a long stretch of beach is backed by sand dunes and pinewoods. Most of the beach is taken up by private establishments, with lounger and umbrella rental for about €8 a day. The beach businesses must follow strict coronavirus rules, including maintaining adequate space between loungers and disinfecting the beds between customers. 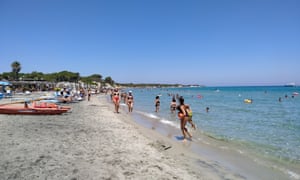 “The season is slowly getting started, but with a reduction of 30% or 40% compared with previous summers,” said Enrico Castellano, who manages the Due Laghi beach club. “We’ve had a lot of British people visiting over the past 10 years, but not so many now. I hope they return. It’s a beautiful region, full of nature and well-serviced tourism.”

Salento’s economy was once fuelled by the tobacco industry, but all that remains today of that era are abandoned factories. Olive oil is a major product, but growers have been badly affected by another infectious disease – Xylella fastidiosa – a plant pathogen that has killed tens of thousands of olive trees in recent years. That leaves the region heavily dependent on tourism. Villages would usually draw visitors through cultural events and sagre, food festivals showcasing local specialities. But these have mostly been cancelledthis year.

“It all went up in smoke,” said Remo De Pascalis, a bakery owner in Giuggianello, close to Specchia Gallone. “All the women usually collaborate to make traditional dishes. Sagre bring small communities together but also attract plenty of tourists – they are the event of the year.”

Restaurants, especially those with ample outdoor space, are managing to hold up.

“We lost April and May in the lockdown but since we reopened in early June, there has been a steady flow of people,” said Barbara Vincenti, co-owner of Matisse, a restaurant in Uggiano la Chiesa, near Specchia Gallone and recommended for its seafood. “We have a garden so we manage to distance the tables well. For the moment, we are not doing too badly. But I worry about the winter, as people might not want to eat inside. Plus, we don’t know what awaits us with the virus.”

The season at Palazzo Siena wraps up in October, when Gilda returns to her home in Bari. She’s not expecting much from the next few months, but hopes to see her friends return in 2021.

“This year has been different,” she said. “I just hope that nothing else happens and that we can soon get back to normal.”

• Palazzo Siena has a special rate of €190 a night for its comfort rooms in August and September (normal rates in August from €223-€366). In October, comfort rooms cost €139 and suites €179, palazzosiena.com