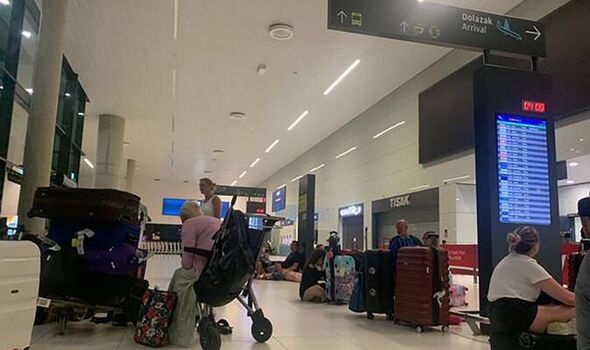 The TUI flight from Paphos, Greece, to Manchester had already been delayed for a number of hours due to staffing problems, before it was forced to divert to Zagreb in Croatia because of the “disruptive passenger.” Passengers claimed they saw the man openly taking a substance and praying on the floor, before making chilling threats towards other tourists and cabin staff.

Screams could reportedly be heard throughout the aircraft after claims the man attempted to open the emergency exit – before being restrained by fellow passengers.

After the plane was diverted to Zagreb airport in the early hours of Tuesday morning, holidaymakers claim they were left stranded for hours.

One passenger, named Kirsty, was sitting with her husband and two children when the chaos unfolded.

She told Manchester Evening News the shocking incident was the “most frightening experience” of her life. 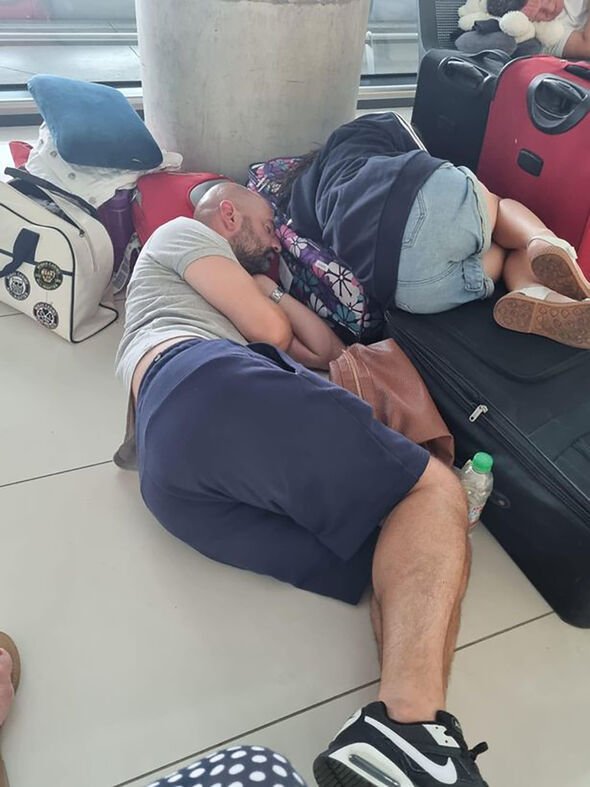 Her family had already been put up in a hotel the night before due to their original flight to Manchester  being delayed as the crew had “reached their regulated hours.”

Kirsty said: “We watched the passenger take cocaine and try to open the plane door. I honestly thought my life was going to be taken. This passenger pointed at me and my children and told us that he would ‘see us in heaven.’

“As he crouched on the floor praying I screamed for help. The only help I received was from my husband who took matters into his own hands to defend and protect everyone on this flight.”

After landing in Croatia at 1am, Kirsty said there was nobody there to greet passengers.

“We were left sitting on the airport floor since the early hours of the morning and have now finally been taken to a hotel 20 minutes away from the airport,” she said. 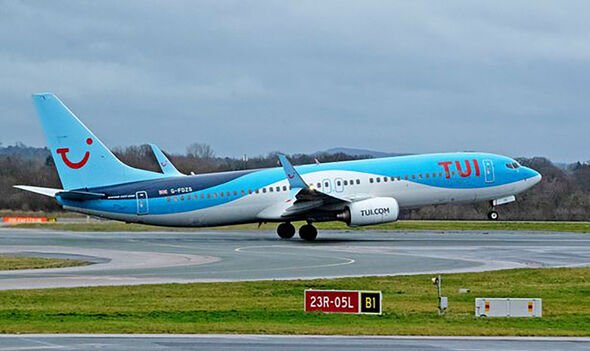 James Rawcliffe, 38, had been sitting at the front of the plane with his wife and daughter, who has autism, when he noticed a commotion towards the back of the plane.

“They said they were going to turn the lights off so people could sleep but then they suddenly went back on and you could see something was happening at the back of the plane,” he said.

“There were a lot of people going towards the guy and trying to calm him down. As time went on, there was an off-duty police officer and he went forward with another volunteer to try and calm the guy down.

“He was getting on his knees and said ‘I will see you all in heaven’ then he went towards the door to try and open it before three of the guys jumped on him. There was screaming, crying and just blind panic.”

The dad, from Blackpool, Lancashire, described scenes of chaos after arriving at Zagreb airport, as passengers were getting “upset” over the lack of communication, and others required medical assistance.

“There were a lot of people sleeping on cases for long periods of time and people were getting very upset,” he said. “One family needed insulin and were told to go and find an ambulance outside.”

A spokesperson for TUI said shortly after the incident: “We’re very sorry to all customers impacted by the delay to TOM2731 and subsequent diversion due to a disruptive passenger.

“Unfortunately due to on-going disruption with the aviation ecosystem, the original flight was delayed overnight as crew had reached their regulated hours. Our TUI reps supported customers throughout and the airport and the flight departed on Monday, August 15, in the evening.

“The health and safety of our customers and crew is always our highest priority and due to a disruptive passenger the flight was forced to divert to Zagreb, Croatia. The passenger was offloaded, was met by Police will not travel with TUI when the flight departs later today. We take a zero-tolerance approach to disruptive behaviour on our flights.

“We understand how frustrating this additional delay will be for our customers and apologise for the on-going delay they now face. We have a TUI team supporting customers in Croatia, we have kept them updated with regular communication, have sourced accommodation and provided meals and refreshments.

“We thank customers for their understanding and patience and would like to reassure customers that instances like this are extremely rare.”