Algarve a go-go! Portugal’s off the quarantine list at last – and here are 10 great bargains to keep summer alive

The air bridge to Portugal is up – and that means the joys of the Algarve are available once more to British holidaymakers.

Here we present 10 of the very best deals for this summer for locations including Albufeira, Olhao and Vilamoura.

About four miles west of Praia da Rocha, in the Algarve, the town of Alvor has a charming harbour with fishing boats and seafood restaurants. It’s an ancient settlement with the ruins of a 13th-century castle up a hill.

There is also a beach outside the centre, where most tourist accommodation is clustered. Great birdwatching on the peninsular by the mouth of the River Alvor; guided tours are available.

Details: A week at Club Alvorferias Apartments from £233pp self-catering, departing on September 3 from Gatwick (tui.co.uk). 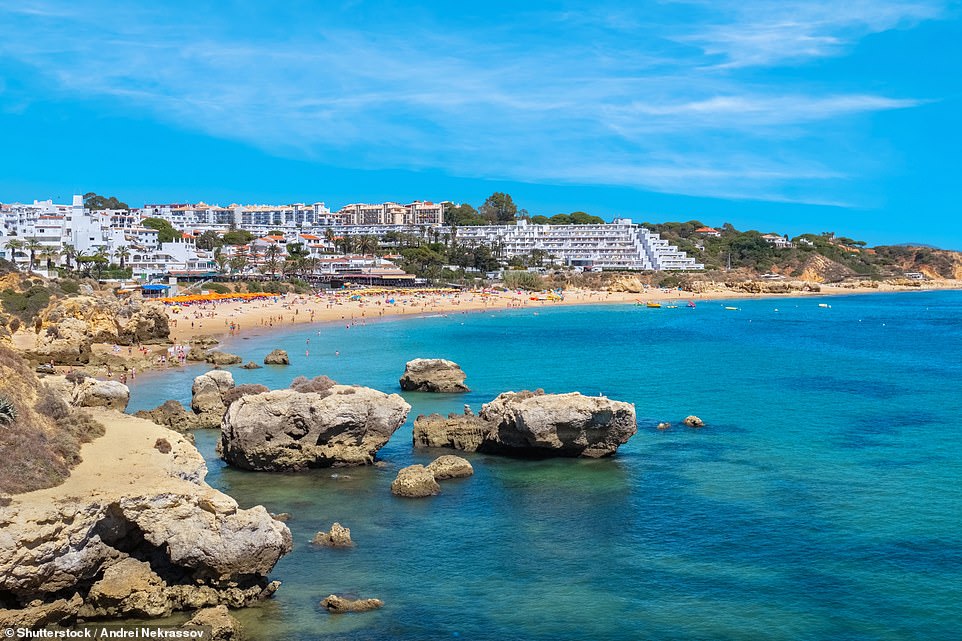 Praia da Oura, pictured, has a fine sandy beach. It measures in at 900 metres long and the quietest parts are at the eastern end

Praia da Oura is a fine sandy beach, with a rocky bluff, topped by pines and a coastal path at its western end leading to the busy, popular tourist resort of Albufeira. There is plenty going on close by, though with good restaurants and jolly bars.

The golden sands, 900 metres long, can get overcrowded in normal years; the quietest parts are at the eastern end.

Best thing? Walks along the coast.

Details: A week at Ouratlantico Apartments from £385pp self-catering, departing on September 20 from Birmingham (tui.co.uk). 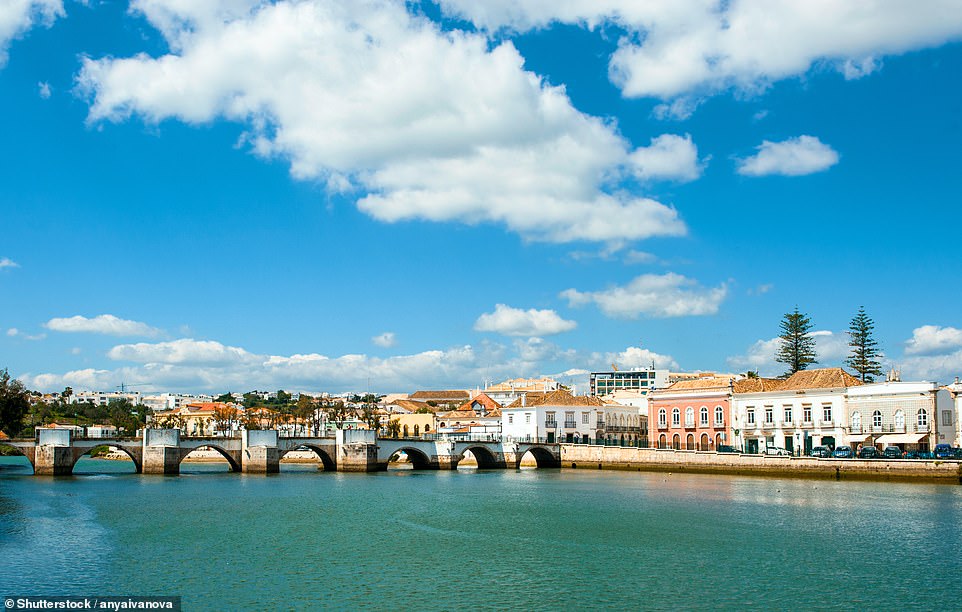 The ancient town of Tavira, pictured, has a tranquil, traditional feel along the waterfront of the River Gilao

The ancient town of Tavira was founded in 400BC and was an important trading port with North Africa for many years. There’s a tranquil, traditional feel along the waterfront of the River Gilao.

Boutique shops and restaurants can be found near the old market. The beach on Ilha de Tavira, an island reached by ferry, is wonderfully peaceful.

Details: A week at Robinson Club Quinta da Ria on the edge of Tavira, with two golf courses, is from £823pp all-inclusive, departing on September 10 from Gatwick (firstchoice.co.uk). 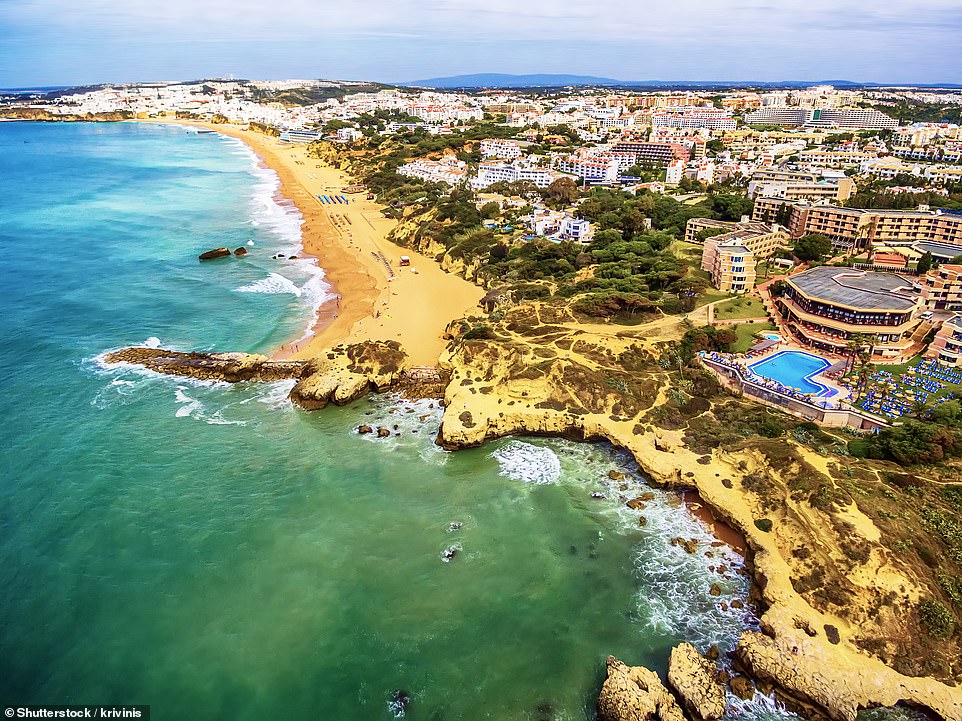 Albufeira, pictured, is one of the Algarve’s best spots for letting your hair down. It has lanes lined with bars and restaurants

With its whitewashed buildings and lanes lined with bars and restaurants, Albufeira is one of the Algarve’s best spots for letting your hair down.

The beach is reached via a tunnel from the main square —and it’s a beauty with fine golden sands. A day trip to the picturesque village of Alte, one of the prettiest in the region, or to see the cathedral and castle in Silves is recommended.

Details: A week at the Cerro Mar Colina apartments in Albufeira from £373pp self-catering, departing on September 10 from Manchester (firstchoice.co.uk). 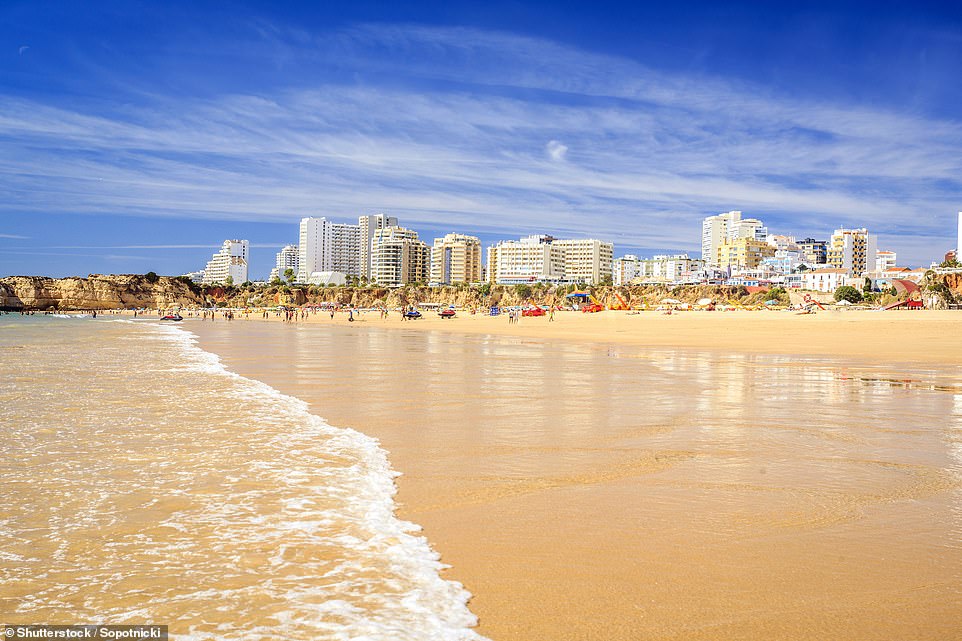 The excellent sandy beach in Praia da Rocha, where there are bars and restaurants galore as well as an old sea fort

One of the most developed stretches of coast on the Algarve — but Praia da Rocha is popular for a reason: its excellent sandy beach backed by low, ochre-hued cliffs.

There are bars and restaurants galore, plus an old sea fort and a casino. A day trip to Ferragudo, with its cobbled lanes and little seafood restaurants, offers a change of scene, and there are plenty of nearby coves to explore.

Details: A week at Jupiter Algarve Hotel in Praia da Rocha is from £487pp B&B, departing on September 12 from Glasgow (jet2holidays.com). 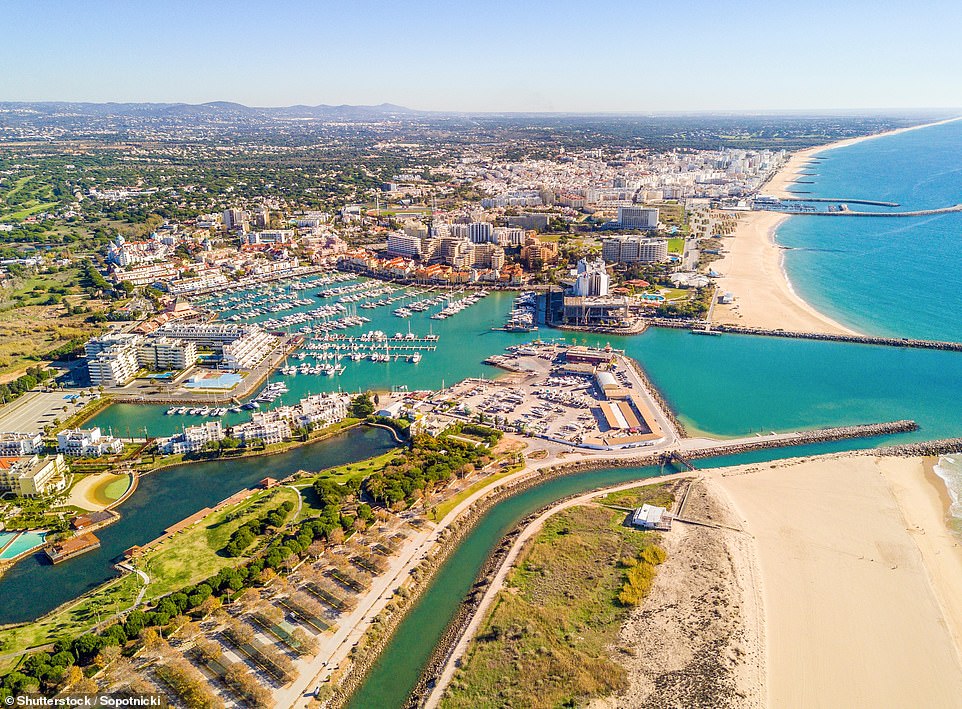 Vilamoura boasts Portugal’s largest marina, pictured, where you can expect to see yachts aplenty as well as boutique shops

Vilamoura is a big resort built from the Sixties onwards, round what was once a small harbour in the Algarve. Now it is home to Portugal’s largest marina. So expect yachts aplenty, boutique shops, restaurants and cocktail bars.

As well as sandy beaches, tennis and golf can be played close by and there are Roman ruins to investigate at Cerro da Vila, on the outskirts.

Details: A week at Vilamoura Golf Apartments is from £326pp self-catering, departing on September 12 from Manchester (jet2holidays.com). 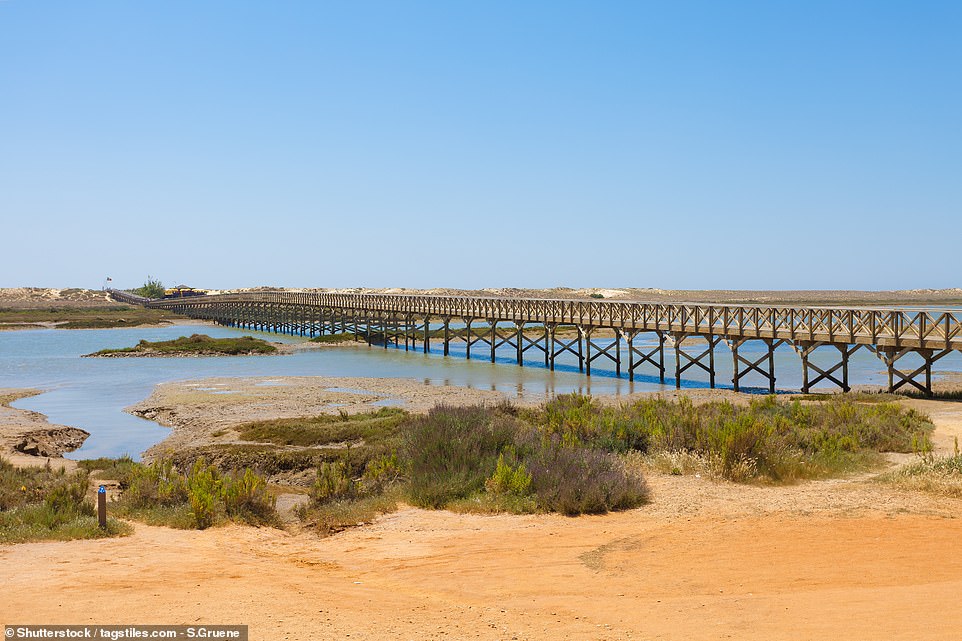 The lovely beach of Praia do Ancao, pictured, from where nature trails run along the coastline 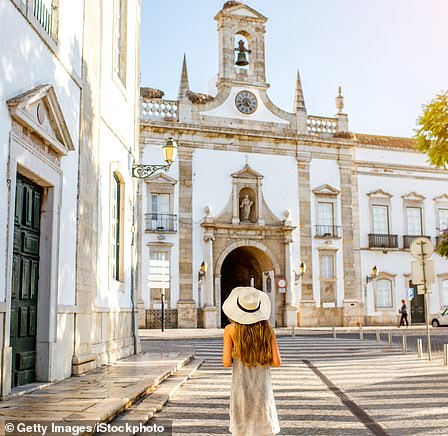 Portugal’s ambassador to the UK says British holidaymakers shouldn’t hesitate in visiting Portugal. Pictured is the city of Faro

We are very happy! Finally, there will be many British tourists coming to my country now that the quarantine requirement has been lifted.

It has been a challenging time — a time of frequent, open dialogue with our British colleagues, where we repeatedly gave our point of view that it was safe to travel to Portugal. This was not fully accepted. But now that has changed, which is great news.

Of course, the absence of British tourists has been noticeable and has made life difficult for our tourism sector. In the Algarve, from where I have just returned after spending my holidays there, it was not the same as usual. The British were much missed.

I go every year to the Algarve and, this time, I stayed for ten days in Baia, a resort near Albufeira. There were fewer people on the beaches than usual. But I was pleased to see that, despite the difficulties, businesses continued.

The atmosphere was quiet and confident, waiting for change to come.

I did not see any signs of fear or worry. People were respecting fully the health rules. They were happy, perfectly at ease.

I want readers of the Daily Mail to know that autumn is a good time to go to Portugal, especially the Algarve. 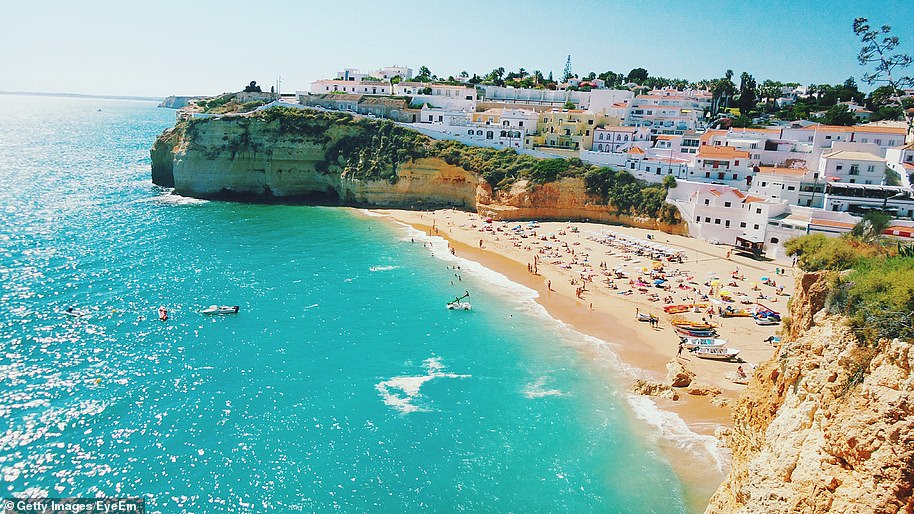 British tourists should come to Portugal in full confidence, says the ambassador. Pictured is Carvoeiro beach

September is the high season for golfers and we have plenty of courses for players of all standards.

From the end of October, those who like lower temperatures, less sunlight, attractive landscapes, playing sports and so on will realise that Portugal is a fantastic destination.

British tourists should come to Portugal in full confidence that we will welcome you and offer the very best in friendship and hospitality. So please don’t hesitate.

Quinta do Lago is a big, luxury golf resort with two top-class courses. Its rolling, well-manicured landscape leads to a lovely beach, Praia do Ancao, from where nature trails run along the coastline. There are a choice of apartments and hotels.

Best thing? Golfers will love it.

Details: A week at the five-star Conrad Algarve spa hotel is from £1,090pp, departing on September 12 from Heathrow (ba.com). 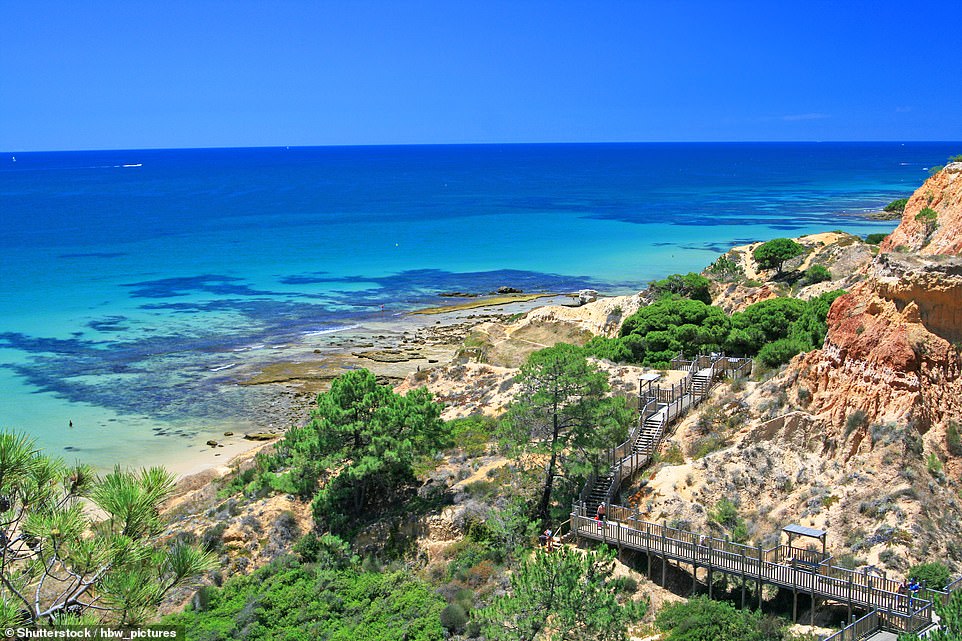 The beautiful, secluded sandy beach of Praia da Falesia. On the cliff above the beach, you can find the family-friendly Pine Cliffs Hotel

On a cliff above the beautiful, secluded sandy beach of Praia da Falesia, Pine Cliffs Hotel is a family-friendly resort with pools, a spectacular golf course (with fine holes including shots over gullies) and the Annabel Croft Tennis Academy.

There are no fewer than 11 restaurants, kids’ clubs and a beach club/bar. It’s on the edge of Olhos de Agua, a tiny town with a natural spring.

Details: A week at the Pine Cliffs Hotel is from £770pp B&B, departing on September 12 from Heathrow (ba.com). 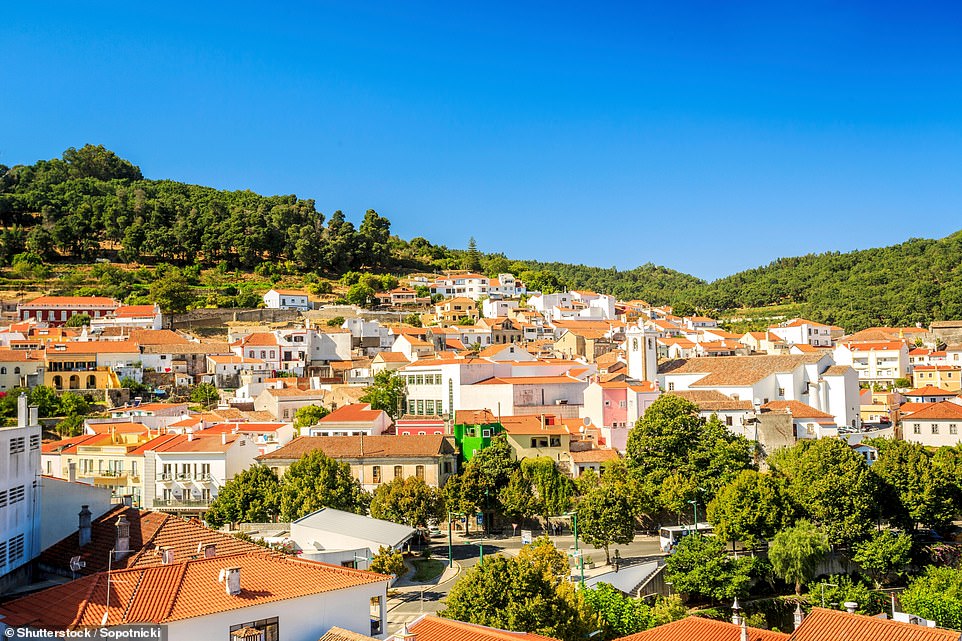 The hill-town of Monchique, pictured, has a market and a 17th-century monastery

Stay in the foothills of the Serra de Monchique, a mountain range that divides the Algarve from Alentejo to the north. Slopes are covered in thick pine, chestnut and oak forests.

The hill-town of Monchique has a market and a 17th-century monastery. A thermal spa at Caldas de Monchique is four miles away. The area is known as the Garden of the Algarve.

Best thing? Hikes in the hills.

Details: A week at the Monchique Resort & Spa is from £917, departing on September 13 from Stansted (onthebeach.co.uk). 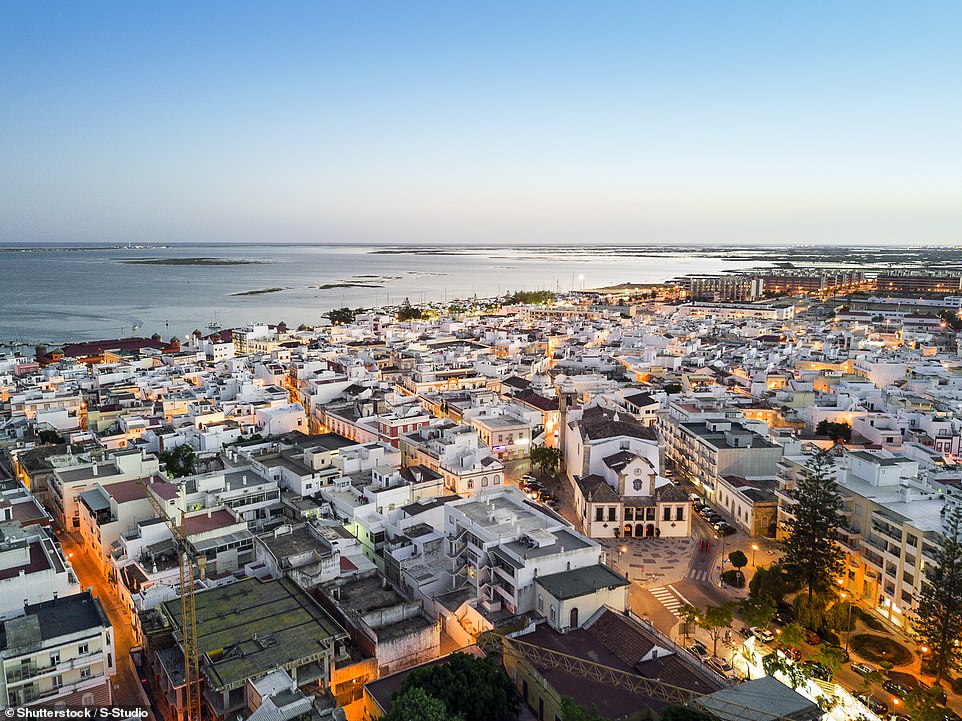 The fishing port of Olhao, which is six miles east of the city of Faro. Expect narrow streets with tiled buildings and a superb fish market

Olhao is a fishing port that is home to the well-known Bela sardine brand and is six miles east of Faro.

It’s a relaxing spot within the Ria Formosa Natural Park by an estuary sheltered by the islands of Culatra and Armona. Expect narrow streets with tiled buildings and a superb fish market designed by Gustave Eiffel, no less. A boat trip to the secluded beaches on Culatra is a must.

Best thing? Trying the local octopus and squid, some of Portugal’s best.

Details: A week at the Real Marina Hotel is from £1,290 for a single traveller, including B&B and some meals with wine and activities, departing on September 13 from Stansted (friendshiptravel.com).

GOOD TO KNOW BEFORE YOU GO: PORTUGAL FACTS 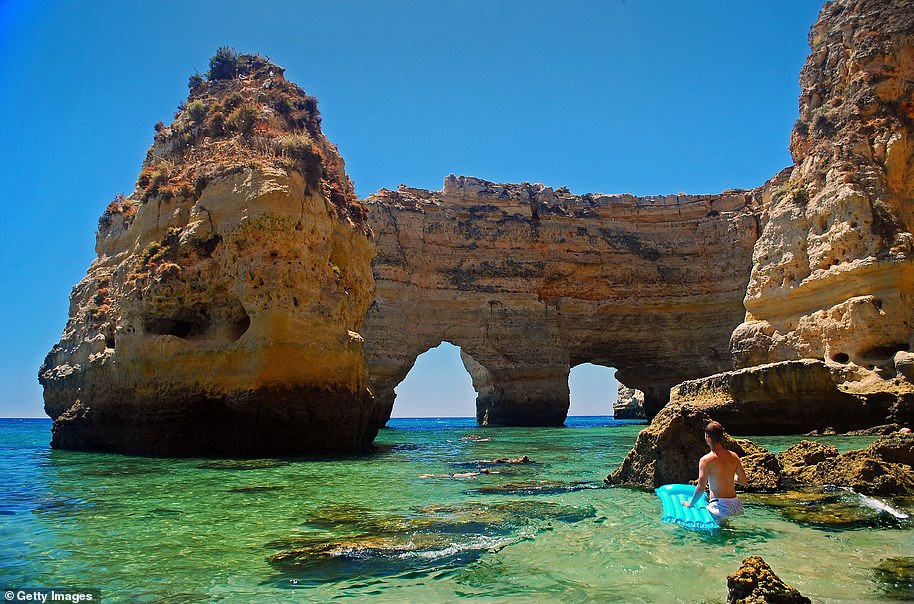 There’s an average of around 300 days’ sunshine a year in the Algarve, pictured

Tags: off, Portugal&apos;s, quaran, the
You may also like:
Recent Posts