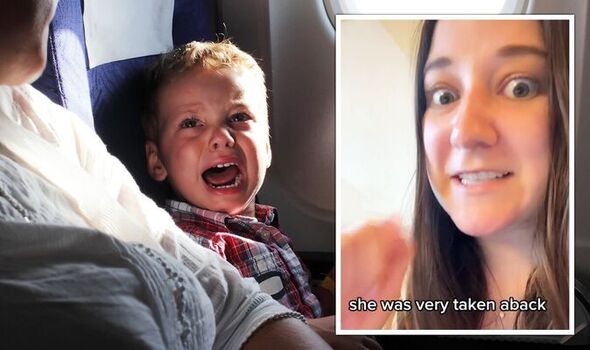 She has amassed 11.7K followers on her TikTok account and 2.7M “likes” on her videos. In a recent video, she told a real-life story of the time a parent allowed their child to climb all over them.

The content creator responded to a video in which a TikToker bemoaned being asked to move seats on a plane by other travellers. She said: “You can always ask, the problem is the people who get mad when they don’t get their way.”

She detailed a terrible experience after she refused to move to accommodate a family who asked her to. She had booked the window seat but was asked to move to the aisle seat on the other side of the plane by the family so they could sit together.

The TikToker explained: “I had a six-hour flight and I tried to plan my sleep schedule on the plane, so I don’t end up jetlagged. I’m pretty sure I have a sleep disorder.

“Anyway, I get to my row and this woman asks me, ‘do you want an aisle seat?’ I said, ‘Oh, no thank you. I got the window because I want the window’. She was very taken aback.”

The traveller claims this mother allowed her child to misbehave after her request to swap seats was refused. She said: “She was sitting with her kid and she wanted the other seat for her husband. I think out of spite this woman refused to deal with her child because of it.

“I fell asleep before we took off, when I woke up the child was climbing on top of me. I did not know what to do, so I forced myself to pass out and then sleep through the most uncomfortable night of my life.”

Almost all the commenters on the platform were in agreement with the traveller’s decision not to move and were appalled by the parent’s behaviour.

Jeremy Vine guest calls for ban of alcohol on flights

However, one suggested she move, sparking a fiery debate. “So just switch seats next time and don’t be difficult,” they said.

One responded: “Why should she switch? Lack of planning by the mom does not constitute an emergency on the OPS side.” Another said: “In this scenario, I would have bought a window seat, but I would be nice and give it up.”

Few people agreed, however, and most discussed how they would have responded in the same situation. One said: “I would have screamed and caused a scene. Pushing the child off of me acting like it was a spider crawling on me. But I’m extra like that.”

Another said: “If parents refuse to parent their child, then I will. I would have reprimanded that kid so fast.” One wrote: “I would have said remove the child off me or I will.”

Parents also chimed in, all claiming the parent in the post was unreasonable. One said: “I have a kid and I would never expect someone to switch seats. That is why I pay extra so we all can sit together. Sucks but that’s how it be.”

A travel expert has detailed how to get airline seats together without paying.

Travel blogger Cairo Ferguson said there are some handy hacks which you might be “surprised” by. Their first tip was to simply ask.

She said: “Try calling the airline directly and asking if there are any open seats – you would be surprised how simply asking politely over the phone can work.”