Un-boo-lievable! Meet the paranormal TikToker who ghost hunts across the U.S on a mission to reveal the hidden histories of abandoned and ‘haunted’ locations

Beckie-Ann Galentine travels across the U.S to uncover the forgotten pasts of spooky locations – and now shares her travel experiences with more than 600,000 followers on TikTok and over 75,000 on Instagram, aiming to tell unheard stories of death and different experiences of grief.

She said: ‘I like sharing sides of grief that people aren’t used to. Grief is like a roller coaster. There are highs and lows in certain tales. Like someone actually married their husband after he passed away. At first, this is unusual. But then, who are we to judge people for their grieving process?’

Scroll down for video 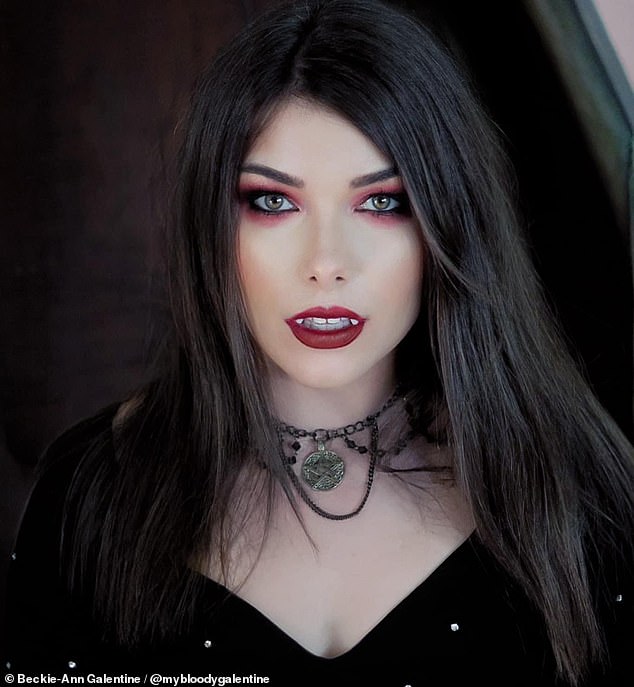 Beckie-Ann Galentine travels across the U.S to uncover the forgotten pasts of spooky locations

The 31-year-old influencer developed a fascination for all things ghostly after growing up in an antique store in western Pennsylvania. But exploring supposedly haunted and abandoned places became her full-time career when she moved to Connecticut a few years ago.

She said: ‘New England really embraces the weird. Everywhere I went, even people I worked with or people in passing were like, “I have this ghost story” or “I have this thing going on.” So it really was born out of trudging through the worst part of the pandemic.’

She said: ‘My first experience of ghost hunting was kind of like an October activity. I just said to a friend of my brother “let’s go ghost hunting”.

‘We walked up the road to a cemetery and had a flashlight, a point-and-shoot camera and a cheap flip phone. After about 15 minutes we got frustrated and we put all our stuff away and said, “Let’s go home – this is ridiculous.”

‘In that moment, we turned off our flashlights and we were calling my mum to come and pick us up. And out of the corner of my eye I see this glowing sphere. 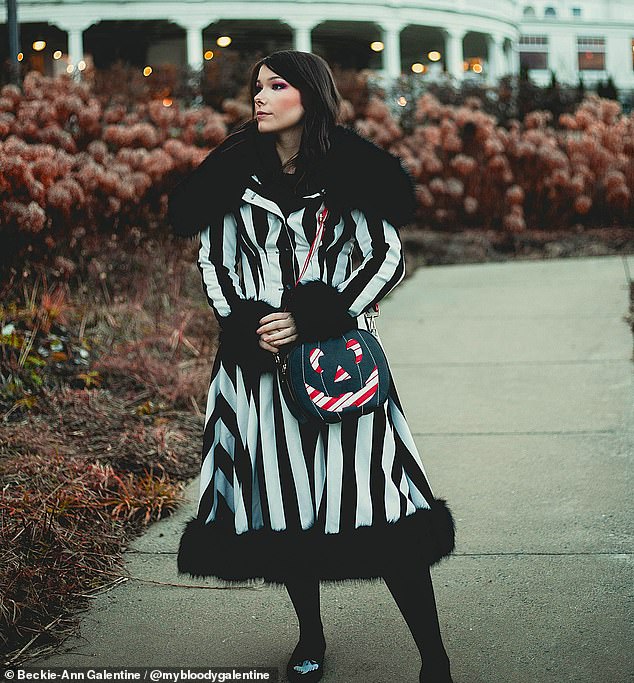 ‘It was just so wispy and strange on the dark sky. I could see it float in between two trees.

‘It hovered for about 15 seconds while we sat and discussed if I saw something or not and it just floated down perfectly. It just glided with no sound surrounding us.

‘It felt like the world had stopped for a second. It came in between my friend and me, and we jumped in opposite directions. So the confirmation of having someone witness something like that is what validated it for me.

‘I knew I saw something.

‘It changed my life after that and it consumed all of my time. I was showing up late to class because my friends and I were out going to cemeteries, abandoned train stations, schoolhouses – wherever we could go to try and match that encounter.’

Despite travelling far and wide to find supernatural activity, Beckie-Ann claims that one of her most frightening experiences happened at home. 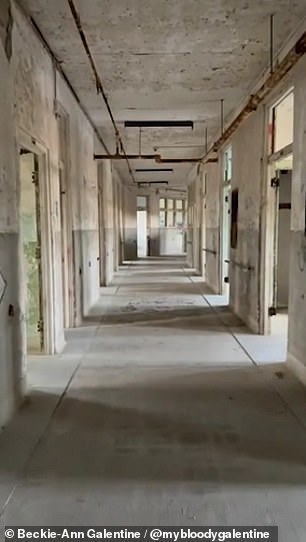 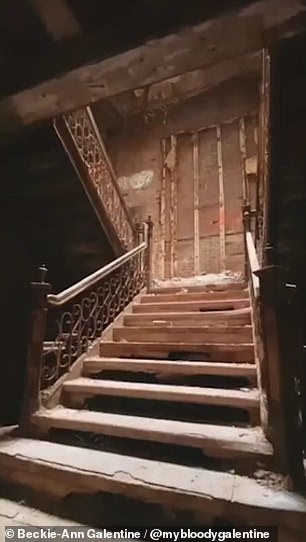 Above are scenes from Beckie-Ann’s TikTok videos, with the image on the left showing the abandoned Waverly Hills Sanatorium in Louisville, Kentucky. On the right is a staircase in Saratoga County Homestead, also called Homestead Sanitarium, a former tuberculosis sanatorium in Providence, New York 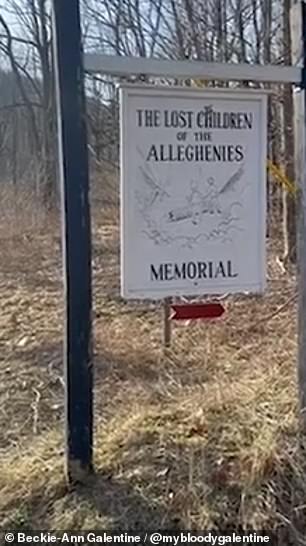 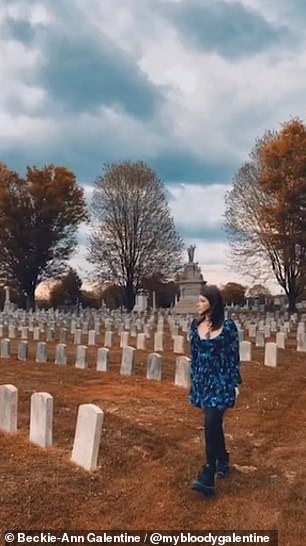 On the left is a scene from Beckie-Ann’s TikTok video about her visit to the Lost Children of the Alleghenies memorial in Ilmer, Pennsylvania, which pays tribute to two young boys – Joseph and George Cox – who died tragically in the late 1800s. On the right is Beckie-Ann at the Grandview Cemetery in Johnstown, Pennsylvania

‘There was a full figure – I could almost see the light in their eyes. I tried to wake up my partner but I had sleep paralysis and I was like, “This is how I die.”

‘And then I smelled this horrible smell like mothballs – worst smell I’ve ever smelled. And then it exited my door and went into my roommate’s room. So I was like, “Ok, my roommate came into my room.”

‘The next day I get a call and my roommate is trying to figure out what happened. Whatever was in the room, touched my roommate’s leg and then wisped down the stairs but never exited the house. 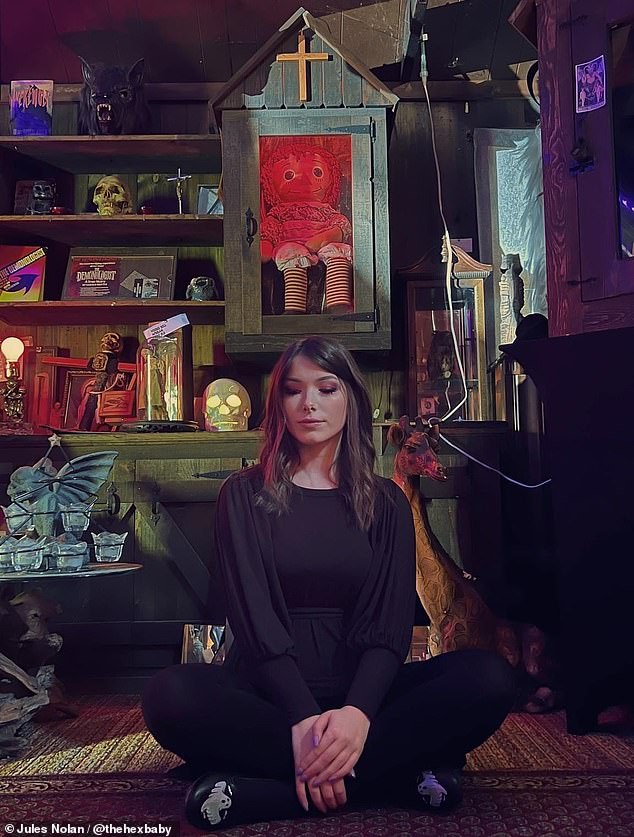 ‘He also smelled the mothballs. I’d probably write it off if I didn’t experience it with someone else.’

Beckie-Ann understands that many people will not believe that these experiences happened but doesn’t let that stop her from sharing these stories online.

She said: ‘I’m not in the business of convincing sceptics. To me there’s no value in fighting tooth and nail with someone that does not believe. If someone has not had that big one like my sphere experience, I understand why someone might not be ready to believe.’