A corking tool for staycationers! New interactive map pinpoints the best vineyards and distilleries to visit in Britain

Visits to continental vineyards for wine-loving Britons are tricky to plan at the moment – so now is the time to get acquainted with the best of homegrown British wine.

Yes, there are vineyards in Britain. And not only do many make very good wine, lots of them roll out great visitor experiences too – as a handy new interactive map by the Wine and Spirit Trade Association (WSTA) shows.

It pinpoints dozens of great vineyards to visit, with grape icons taking users to an information page that details tours, tastings and places to eat and stay on-site.

The map, which launched today, does a similar job for distilleries.

They are marked by spirit bottles.

A visit to a vineyard, the WSTA says, will help visitors understand why English sparkling wine is now rivalling Champagne to such an extent that the Taittinger and Pommery Champagne houses have invested in vineyards in the south of England.

Britain now boasts over 763 vineyards, over 260 of which were established in the past five years, leading to the planting of over three million vines across UK slopes. 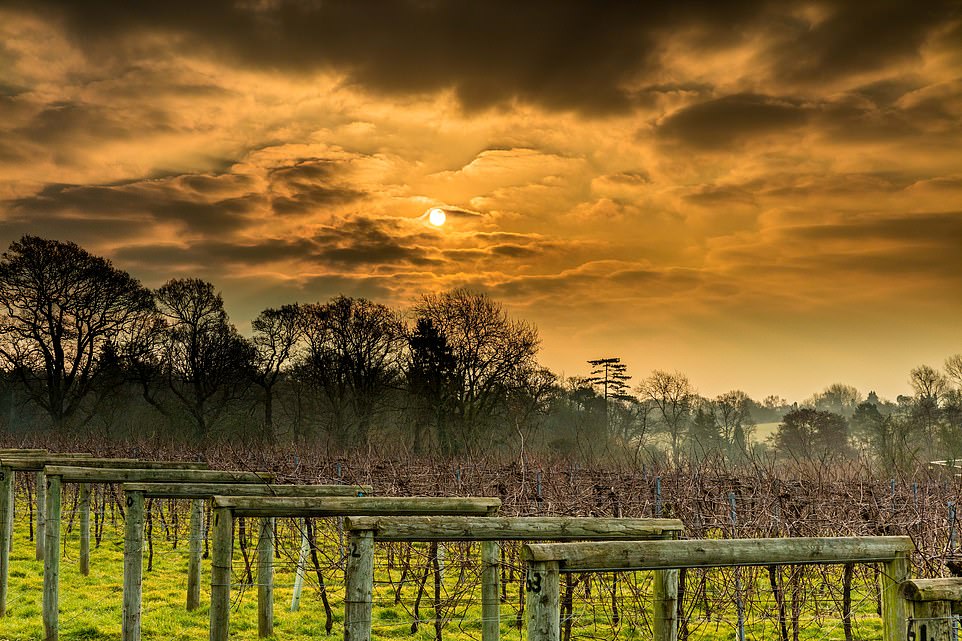 Pictured here is the Bolney Wine Estate, located in the heart of rural Sussex. It’s one of the country’s oldest vineyards 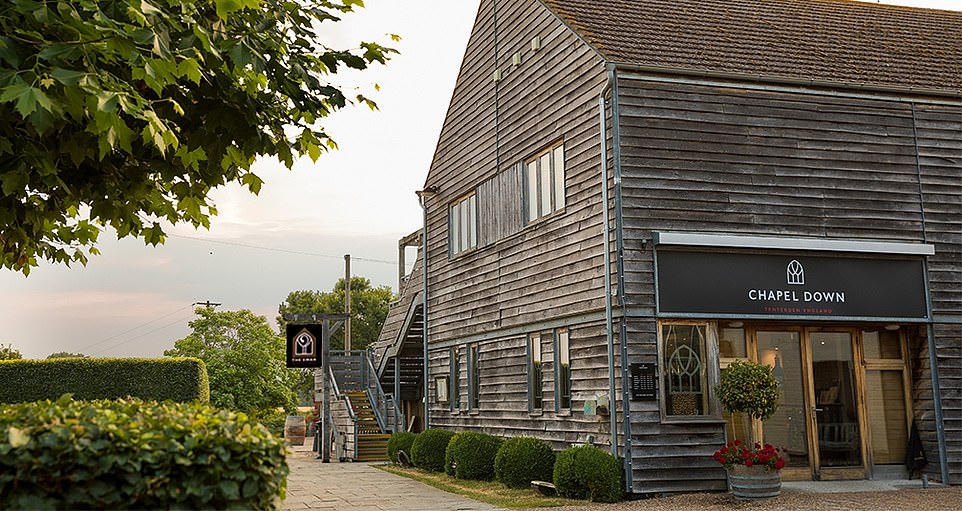 Chapel Down vineyard, near Tenterden, which is encircled by the rolling Garden of England countryside. Prince William and Kate Middleton chose to serve Chapel Down sparkling rosé at their nuptials in 2011 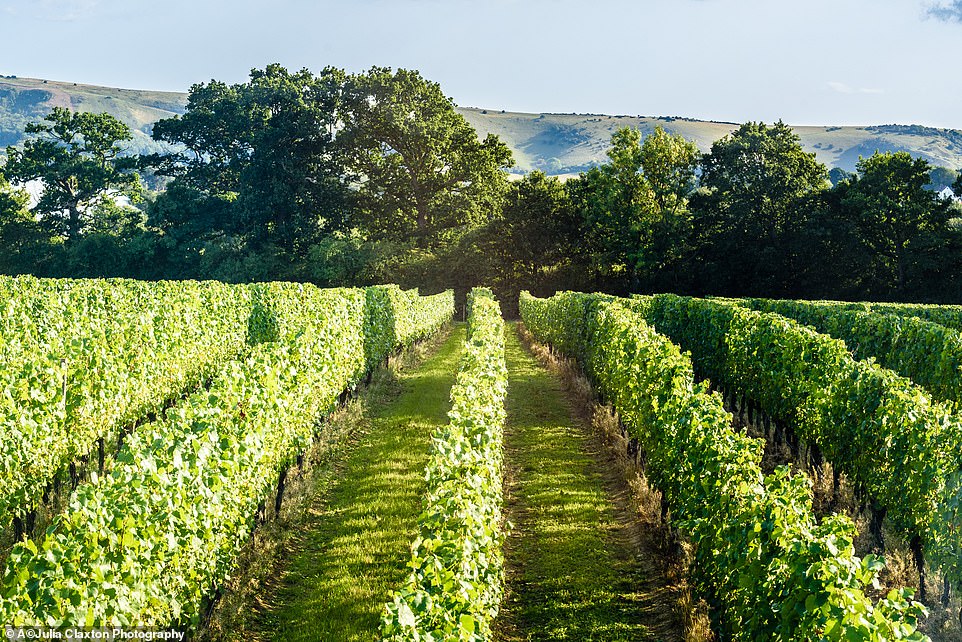 Ridgeview vineyard, in Ditchling Common, East Sussex. Queen Elizabeth II served bottles of Ridgeview’s Grosvenor sparkling wine to guests at her 80th birthday party and a glass of its sparkling rosé, Fitzrovia, to Barack Obama during a state visit

In 2017 there were one million vines planted, which went up to a record-breaking three million last year.

Three-quarters of the wine produced in the UK is sparkling.

The UK’s increasingly temperate climate and chalk soils are ideal for producing outstanding sparkling wines made in the same traditional method as Champagne, using a blend of Pinot Noir, Chardonnay and Pinot Meunier grapes.

The quality of English sparkling wine has led to an impressively stocked trophy cabinet, which has attracted foreign investment including from some of the world’s most renowned Champagne houses.

Prince William and Kate Middleton chose to serve Chapel Down sparkling rosé at their nuptials in 2011.

Following the combined harvest of 2018 and 2019, Britain produced the equivalent of over 23million bottles of still and sparkling wine – compared to less than 10million bottles over the 2015 and 2016 harvests.

WSTA acknowledges the ‘ginaissance’, too.

It says that this has led to a massive wave of investment in exciting new distillery visitor centres and tours.

Even the royals have got involved.

The spirit is infused with 12 botanicals, several of which are from the Buckingham Palace garden, including lemon verbena, hawthorn berries, bay leaves and mulberry leaves.

The Buckingham Palace Gin follows the debut in 2016 of the Queen’s first English sparkling wine, grown on Windsor Great Park, which went on sale to mark the Queen’s 90th birthday and sold out almost immediately.

Thanks to the gin boom the UK now boasts over 440 distilleries, including 80 new distilleries last year alone.

There are now more than double the number of distilleries operating across the country than there were five years ago.

But it’s not just gin tempting a growing number of visitors to distillery tours.

In the past couple of years there has been rapid growth in the number of distillers making English and Welsh whisky.

This has allowed an English and Welsh whisky market to emerge after lying dormant for more than a century.

HMRC figures show the number of distilleries registered in 2019 shot up to at least 441 as the UK boosted its distillery numbers by at least 80 last year.

Gin has been the standout performer in recent years, an industry now worth over £3billion. Last year saw a record-breaking sales of over 83million bottles of gin in the UK worth around £2.6billion, with gin sales almost doubling in value in just two years. 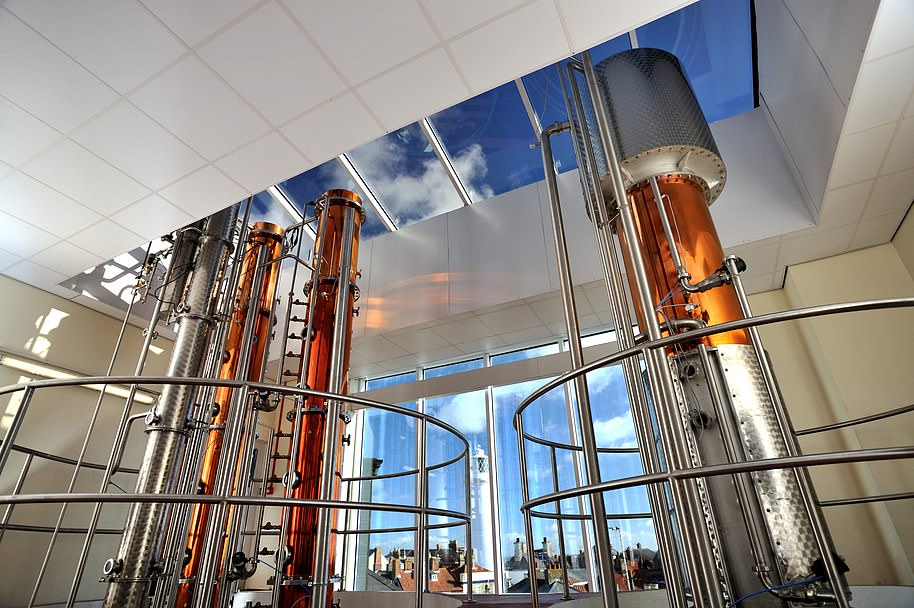 The amazing Adnams Copper House distillery in Southwold, Suffolk. Launched in 2010, Adnams’ spirits have received many awards from across the world, including the coveted IWSC ‘world’s best’ trophies for its Copper House Dry Gin and Longshore Vodka

According to the latest HMRC figures, we exported £672million worth of British gin in 2019, taking total gin sales, at home and abroad, to over £3.2billion.

Consumers are increasingly interested in the locality, provenance and authenticity of what they are drinking. Gin distilleries have been quick to pick up on the revolution that was happening in the British food industry, some years ago, with locally sourced foods becoming big business.

The interest in British gin, which has been dubbed the ‘ginaissance’, has helped to fund new forays into spirit-making, with high-quality English and Welsh whisky and rums coming onto the market in recent years.

English whisky dates back to at least the 17th century but dried up when the last producer closed their distillery doors back in the early 1900’s.

The English whisky drought ended 100 years later when a Cornish distiller decided to revive the craft.

Today, there are at least 20 distilleries across England and Wales producing whisky.

In England, new-make spirit must be matured for a minimum of three years in wooden casks before it can legally be called ‘whisky’, and so the process does take some time.