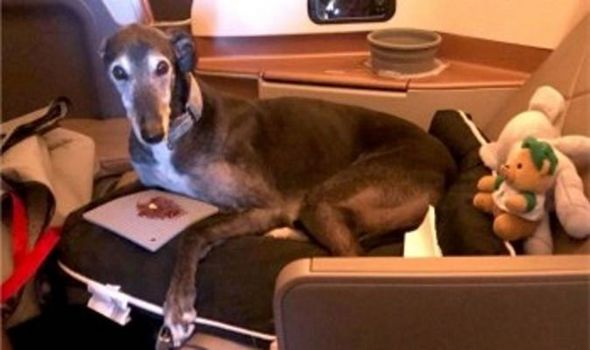 A rescue greyhound called Lewis was treated like royalty when he flew business class on a Singapore Airlines flight from Melbourne to Florence. His owner, Mary Meister, didn’t want to leave Lewis with the cargo as it would mean a three-day separation. So, she started to investigate whether he could fly in the cabin with her- but the airlines’ weight restrictions meant he was too heavy to qualify.

Then, she saw that the airline allows ‘emotional support animals’ in the cabin and researched what that meant.

Ms Meister, who suffers from panic attacks and anxiety, consulted her doctor and therapist who both gave recommendations for her to take Lewis onboard the flight.

She told Traveller: “Being separated for three days was out of the question, the longest I’ve been apart from him, since starting to work from home, is a few hours at most.”

Ms Meister saved up for a business seat with the plan to have Lewis curled up at her feet. But, since the cabin was so empty due to the pandemic, he was able to recline on a luxury seat of his own.

A business class fare from Melbourne to Milan or Rome, via Singapore, with Singapore Airlines costs around £5,000 one way and has fully-reclining seats handcrafted with Scottish leather, an 18-inch TV screen, and guests are served lobster thermidor and Laurent-Perrier champagne.

Ms Meister said that the second leg of the flight fell on Lewis’ seventh birthday and the crew “spoiled him rotten”.

She said: “The flight attendants brought him muffins, croissants, and lots of strawberry jam, which he loved.

“They all said he was the best behaved dog they’d ever had on a flight, and they couldn’t believe how quiet he was the whole time.”

Photos of Lewis sitting sensibly in his luxurious seat were posted to Instagram account @greytgreysrescue, the pet adoption charity who placed Lewis with his current owner.

Thousands of people have liked the post and one woman said: “This is how every greyhound should travel! Well done Lewis enjoy your new life in Italy!”

Another added: “This is absolutely fantastic! Bravo Singapore Airlines!”

A third said she was “obsessed with this”.