Explore the wheel America: 1,250 miles, 5 states, 14 days – a road trip from Denver to San Francisco takes in some of the greatest hits the country has to offer

When Jack Kerouac set forth on his journey across the U.S. to the Pacific Ocean from New Jersey he had $50 in his pocket, the freedom of the road and the rails ahead, plus a glint in his eye: ‘Filled with dreams of what I’d do in Chicago, in Denver, and then finally in San Fran, I took the Seventh Avenue subway . . .’

And he was off — on a series of madcap adventures beginning in 1947 that were to form the backbone of his vivid 1957 novel On The Road capturing the counterculture atmosphere in post-war America.

Without quite having enough time to follow in all his footsteps, we picked up the trail in Denver at the start of a 1,250-mile drive across five states along the route Kerouac took. 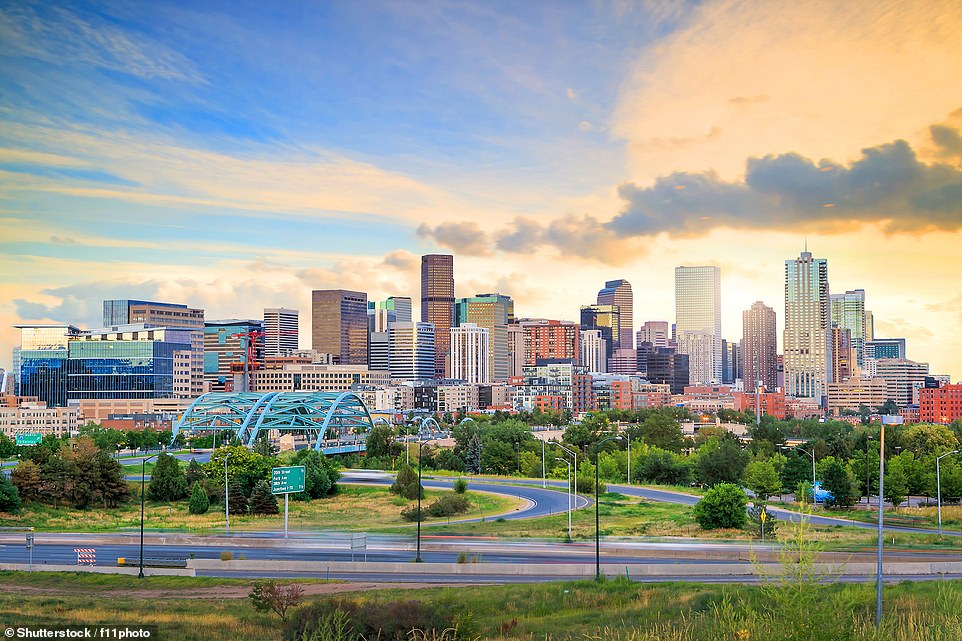 The Daily Mail’s Ed Isacke started his road trip in Denver, which is a ‘modern, upbeat place with art galleries, shiny skyscrapers and smart restaurants’ 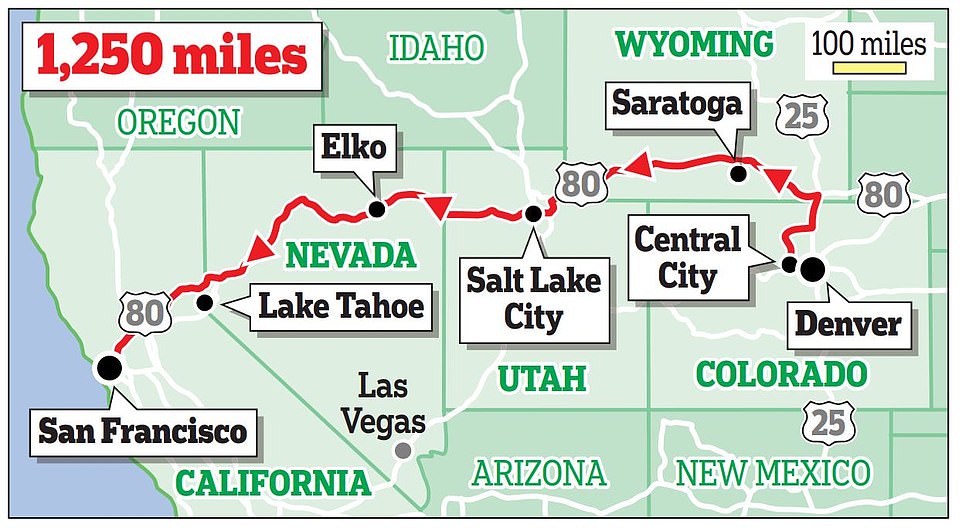 Hit the highway: The above map shows the 1,250 mile route, which passes through five states

A fortnight of life on remote stretches of highway lay ahead, staying in sleepy smalltown America between the Big Smokes — principally Denver (in Colorado), Salt Lake City (Utah) and San Francisco (California). The latter being the famous hangout of so many of the Beat Generation, as they came to be known (for being ‘beaten down’, tired and, occasionally, ‘beatific’).

Denver, nicknamed the ‘Mile High City’, on the edge of the Rocky Mountains, is now a modern, upbeat place with art galleries, shiny skyscrapers and smart restaurants. Yet in Kerouac’s time, the downtown had been home to ‘hipsters, hustlers . . . old bums and beat cowboys’ in whom the writer took great delight.

A few such characters still lurk, yet these days around Larimer Street — the epicentre of non-conformity back in the 1940s and 1950s — some of the city’s best fine-dining restaurants are to be found alongside chic boutique clothes shops and jewellery stores.

It is considered one of the most fashionable districts. A taste of the old ways can still be had at My Brother’s Bar on 15th Street, a poky old red-brick joint where Kerouac is said to have drunk and met friends.

We raised a glass to the Beat poets of old — especially Kerouac (who is transformed into the protagonist Sal Paradise in On The Road) and Neal Cassady (Dean Moriarty in the book). 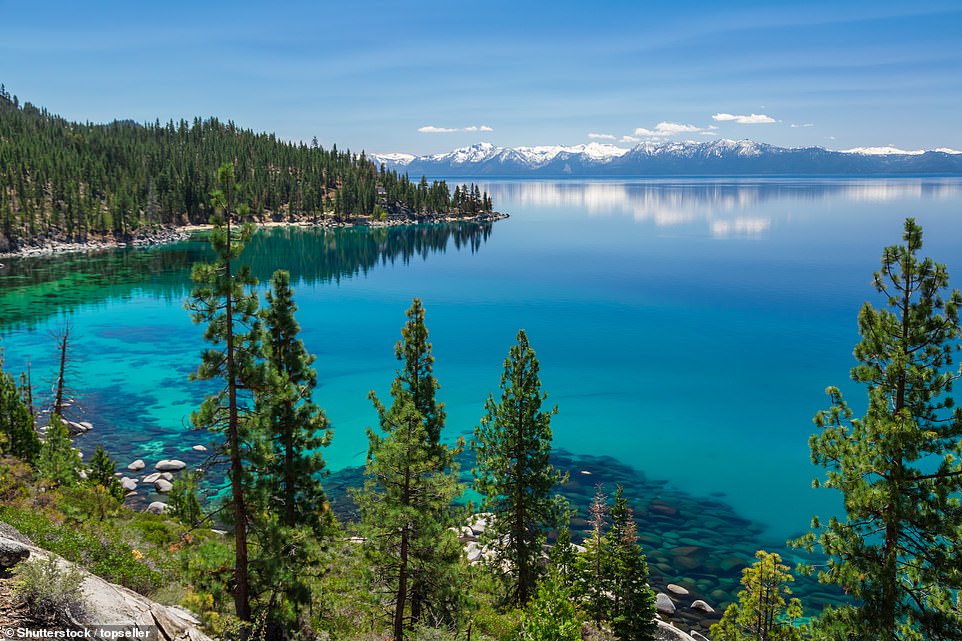 Bucolic beauty: The Daily Mail’s Ed stayed at a lodge by the waterside for a couple of days in Lake Tahoe

Then we hit the road for ourselves. From Denver we drove first into the Rockies, staying in Central City, an old gold-mining centre where Kerouac had once hung out in ‘old saloons with swinging doors’ meeting many a hipster in the hills. Many higgledy-piggledy old buildings survive, though most are cafes or hardware stores, while there is still a lively feel, thanks to no fewer than six casinos dotted here and there.

The journey north up Interstate 25 took in great sweeps of farmland beyond the mountains into Wyoming. After a left on to Interstate 80, which would take us all the way to San Francisco, we stopped at the tiny town of Saratoga, just off the highway.

Wyoming is an extraordinary state — bigger than Britain, yet with a population of 578,000 — and there is a feeling of being one step removed from mainstream America, amid a vast expanse of wheat and hayfields. 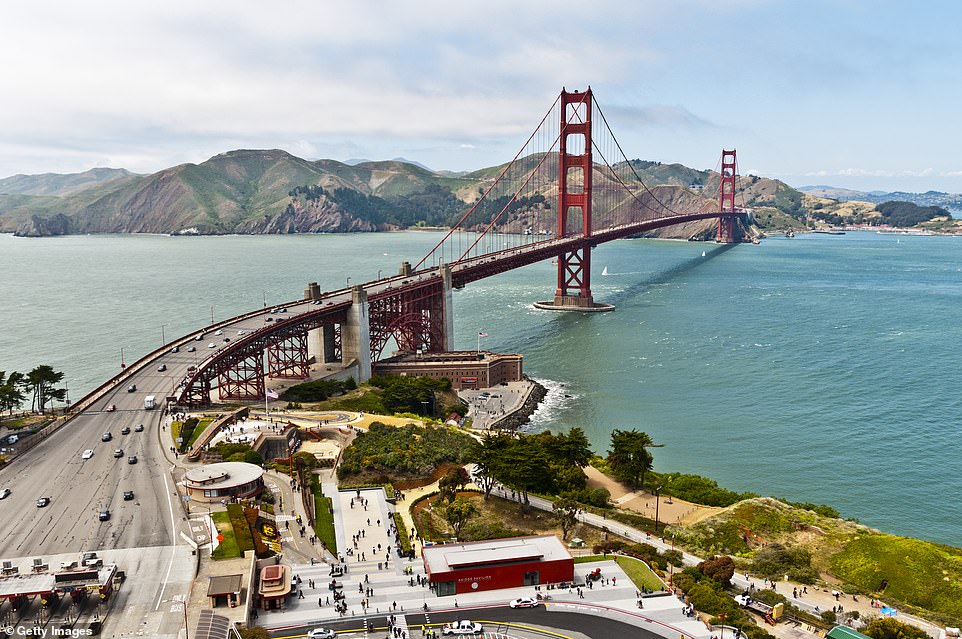 End of the road: San Francisco was the last stop of the unforgettable trip. Pictured is the famous Golden Gate Bridge

HOW TO DO IT

A 14-day fly-drive from Denver to San Francisco from £2,499 pp with car hire, hotels and return flights (bon-voyage.co.uk).

12-day group tour trips of California and the West from £3,299 pp next May including flights and hotels (travelsphere.co.uk).

This is pick-up truck land. Guys wearing camouflage outfits and baseball caps nod at you at the gas station. In our motel, which (rather strangely) came with hot tubs in the garden, old-timers drank Buds and the local sheriff popped by, parking his patrol car by the entrance and coming in to say ‘howdy’ to the owner.

Back on Interstate 80, we rolled on to Salt Lake City after crossing the Continental Divide (halfway between the Atlantic and Pacific Oceans) on a long stretch of very straight highway.

The first sight of Utah’s capital had moved Kerouac into a state of near ecstasy: ‘I saw God in the sky in the form of huge gold sun-burning clouds above the desert that seemed to point a finger at me and say, “Pass here and go on, you’re on the road to heaven.” ’

Inspiring stuff. And we enjoyed visiting the marvellous, almost blindingly white salt flats outside the city, as well as the intriguing Temple of the Church of Jesus Christ of Latter-day Saints downtown. Very few drop-out poets (that we could see) around these days — but plenty of tourists taking selfies.

The drive on led through canyonlands to Elko in Nevada, where gold mining is still a major industry and yet more casinos were to be found near our simple motel on the main drag. Then came the bucolic beauty of Lake Tahoe — where we stayed at a lodge by the waterside for two days.

Beyond was California and the shiny ocean, after twisting along highways through fertile valleys and arriving in San Francisco ‘at the end of America’, as Kerouac had put it, and where so many of his Beat poet friends had been waiting for him.

These days, of course, it is a centre of a new conformity, with all the Google, Facebook and Amazon HQs nearby. Different kinds of hipsters in 2021.

Tags: Following, footsteps, in, of, the
You may also like:
Recent Posts