As airlines halt operations and huge swaths of the global population remain in government instructed lockdown, life beyond the clouds has completely transformed. What was once a robust travel industry has become worryingly desolate, and the future for those working in the industry is more uncertain than ever before.

An Alaskan Airlines flight attendant has snapped photographs of what life looks like inside these cabins now, and the reality is a devastating contrast.

Cabins which were once full of eager and excited holidaymakers now lie eerily barren.

The images were taken by flight attendant and freelance photographer Molly Chroma who shared them on her Instagram page @MollyChroma. 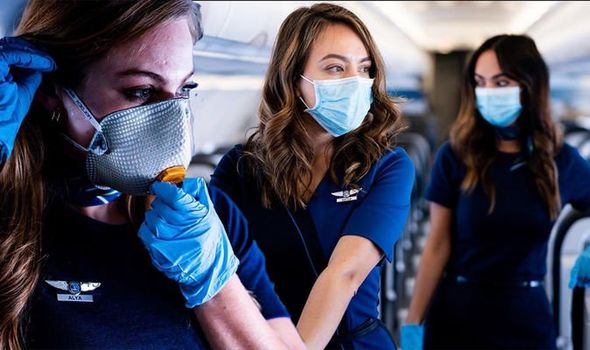 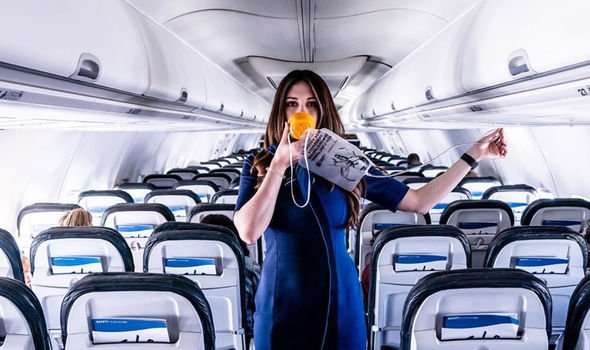 She is one of the few workers who are still flying as part of the airline’s limited schedule to aid essential travel.

Carrying mostly key workers, including medical staff, and those who urgently need to be with their family, Ms Chroma says that flights can have as few as eight passengers onboard.

Though her usual work uniform has a new addition, a mandatory medical face mask, the flight attendant says that she still applies a slick of lipstick underneath.

Speaking to Insider, Ms Chroma described the energy onboard as “pensive and empty” and said she hopes to capture this mood in her photographs.

She also said the atmosphere felt “heavy” and “surreal”.

This is easily noticeable in her images, where cabin crew can be seen presenting safety announcements to rows and rows of empty seats.

Tray tables are folder up, and cabin crew seemingly spend a large chunk of the journey time sitting down. 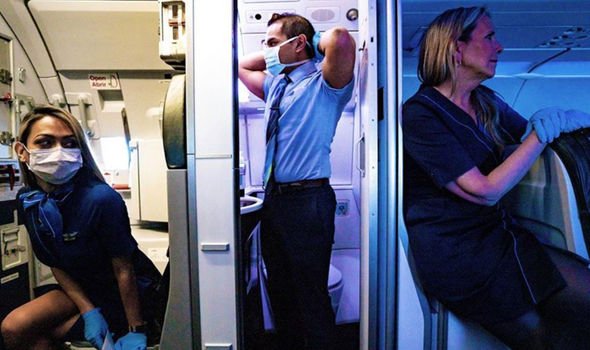 Ms Chroma says she feels it is important to document this time in the air industry.

“I am trying to process what was going on, but do it in a way that would give these empty planes a voice,” she told Insider.

Despite the pandemic, Ms Chroma says her decision to keep flying is an “instinctive one” that she feels is important.

Express.co.uk has contacted Ms Chroma for further insight into her experience. 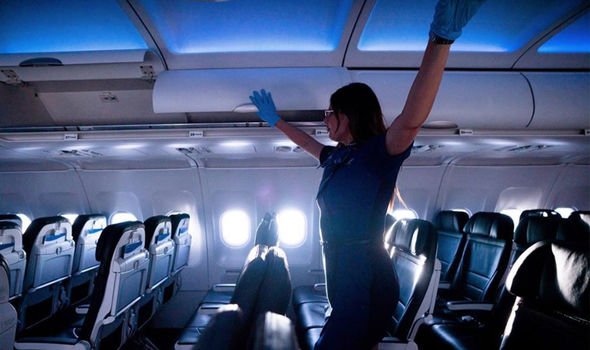 Indeed, around the world, the travel industry has become one of the worst-hit by the pandemic.

It has been reported that nine out of 10 UK flights have been grounded since lockdown began.

As airlines fight to save haemorrhaging funds, cabin crew are slowly losing their jobs – for some, this is a temporary furlough measure, for others this is life-changing.

British Airways announced yesterday it would be laying off an estimated 12,000 members of its 42,000-strong workforce.

easyJet, which grounded the majority of its fleet on March 24, has said it will not consider restarting operations until the end of May at the earliest.

Most of its crew remain on the ground too.

Ryanair won’t be restarting commercial journeys until June at best.

The only cabin crew flying are those who are helping with essential journeys within Europe.

For the UK alone, it’s not yet known when travel will get back to normal, if ever.

The UK Foreign and Commonwealth Office (FCO) is advising all Britons to avoid non-essential travel for an indefinite period of time.