‘Paradise has become hell’: Father reveals how he is stranded on a tiny island over 9,000 miles from his family in the UK with no return expected until CHRISTMAS due to Covid-19 lockdown 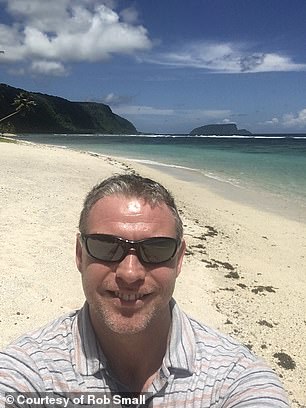 A British man locked down on a tiny island in Samoa has revealed how being trapped in paradise has turned into a nightmare.

Back in March, Rob Small was enjoying his time on the white sand and palm-fringed shores of Upolu but when coronavirus started to spread, all international travel was banned.

Now the 41-year-old remains stranded more than 9,000 miles away from his partner Becky and four-year-old son Oliver with little to do and no end in sight.

So far, the Pacific island nation has recorded no Covid-19 cases but it remains in a state of emergency.

Now, Rob believes that he won’t be able to get back to the UK until Christmas.

He told MailOnline Travel: ‘I often like to quote a line from the movie ‘The Beach’ about what paradise means; ‘It’s not where you go. It’s how you feel for a moment in your life when you’re a part of something’.

‘Well, that’s almost true. Being stuck here in the middle of the South Pacific, going on five months now with nothing to do and no end in sight has made me realise what paradise actually is and I can identify with that quote….

‘Paradise is family and close friends, it’s being around them. It’s the feeling of happiness that you only ever get when you are in their company (unfortunately Skype or Zoom doesn’t count) and if you are with them, then the location is completely irrelevant.’

Rob originally ventured to Upolu, which geographically is the second largest of the Samoan Islands with an area of 434 square miles, to open a diving and water sports centre called Pure Ocean with his business partner Bruno Kinross back in 2016. 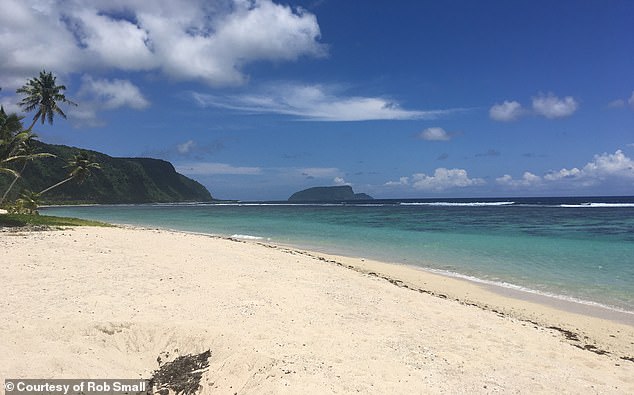 So far, the Pacific island nation of Samoa has recorded no Covid-19 cases but it remains in a state of emergency 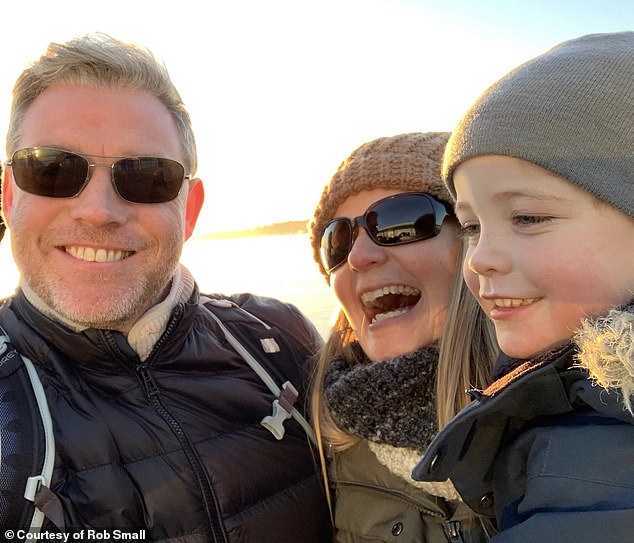 Rob with his partner Becky and four-year-old son Oliver, who he hasn’t seen since February

He had lived in the Cook Islands managing a dive centre so he knew of Samoa, its location and the opportunities it could offer.

There was an opening for a dive centre contract with a Sheraton hotel and Rob and Bruno won it. Rob has been based in Upolu ever since, although he splits his time between Samoa and South West London where his partner and son live.

Explaining his work-life setup, the avid traveller said: ‘I usually do two months in Samoa and two months in London, so I am away for six months a year roughly from my family. In the past I did worry I was losing out on my little boy’s life but this time around I have been gone for painfully long.’

Rob says that because of the strict border closures, tourism in Samoa has ‘completely died’ and many resorts have been forced to close, along with their affiliated businesses.

His business has been closed since April and he doesn’t envisage being able to open in the foreseeable future.

He says: ‘Everything seems to indicate that borders will remain closed here in Samoa until next year.

‘There is no government help whatsoever for businesses like ours so we just have to hope that the borders can open sooner rather than later or we simply may not be able to open again.’ 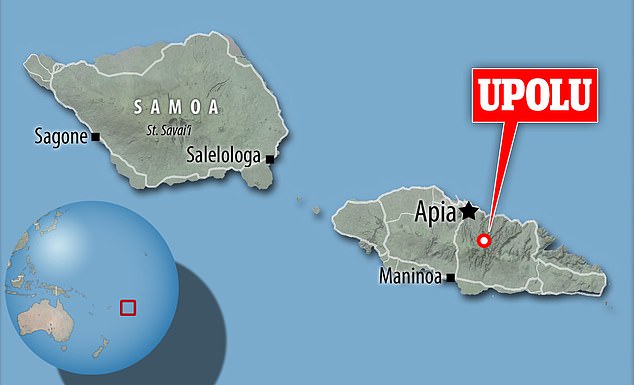 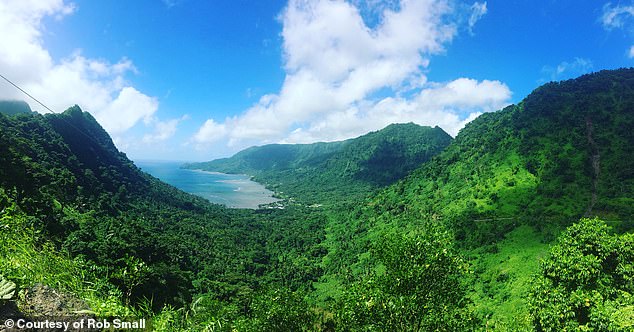 A photo taken by Rob showing the paradisaical landscape in Samoa

To get home would be ‘near-impossible’ at the moment Rob says, because of the global travel restrictions. Usually, his journey back to the UK takes around 38 to 50 hours depending on the transfer times and involves flying to either Sydney or Auckland then connecting to Singapore before flying on to London.

Even if he did manage to get back to the UK, Rob is worried about then not being able to get back to Upolu and what would happen to his life there in his absence. ‘I cannot just leave my house and business and dogs and hope they will all still be here when I return,’ he says.

Adding to his fears, Rob was recently the victim of a break-in, with the robbers stealing a range of electronics and all of his clothing. He was left with two pairs of shorts and a couple of T-shirts.

They also took a ring with little monetary value but lots of sentimental value as he says he has had it with him it on every dive and all of his travels since he was 15. 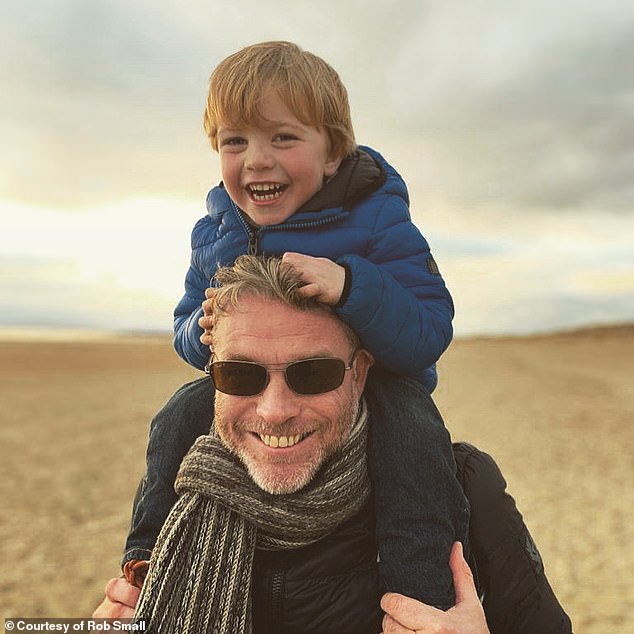 The diver is worried that the burglars could return for the things they missed if he leaves.

With no business to run, Rob has been spending his time exploring his island by car and on his motorbike.

He says he often likes to sit down on the jetty near his home with the pristine blue waters twinkling before him and take time to ‘drink coffee and think’.

Rob talks with his son and partner Becky every day at 6.30pm, which is 6.30am in the UK, via Skype, and he calls other friends and family once a week.

Rob adds: ‘While it’s ‘wonderful to have face-to-face communication and a glimpse into a world I don’t feel part of right now, I get a different feeling talking through the phone or computer, the conversations are different.

‘They’re not bad or anything, just different to being there in person.’ 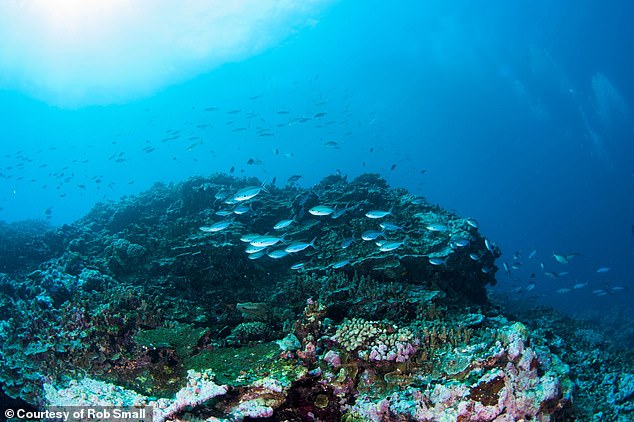 Rob had previously lived in the Cook Islands managing a dive centre so he knew of Samoa, its location and the opportunities it could offer. Pictured, the underwater landscape in Samoa

He adds: ‘I guess as parents we take it all for granted sometimes. ‘My advice to others would be to cherish every moment and put down the games controller, turn off the TV or shut that laptop, turn your phone on silent or just stop working once you are at home.

‘The time you have face to face with your child now is worth so much to them but worth even more to you.

‘Trust me, you don’t want to be in the position where Skype is all there is and you don’t know when the next hug will be. ‘If you are lucky enough to be with your child every day, then make it count.

‘If you wake up every morning to your children and loved ones, trust me, you are in paradise!

‘My biggest wish at the moment, apart from world peace and an end to Covid-19, is quite simple.

‘I want a cuddle from my little boy. I want to see my family.’

Tags: bei, Father&apos;s, nightmare, of
You may also like:
Recent Posts