Think YOU could win Landscape Photographer of the Year 2020? These amazing entries show just how tough the competition is

Do you think you have what it takes to scoop a prize in the prestigious Landscape Photographer of the Year contest?

If you’re a keen snapper and you’ve yet to enter, there’s still time. The competition – which has a £20,000 prize pot – has had its entry date extended by just over a month due to the coronavirus breakout.

The competition is split into four main categories: Classic View, Your View, Urban Life and Black and White. There are also special awards for Landscapes at Night, Changing Landscapes, Lines in the Landscape and Historic Britain.

The winners will be announced on October 18, 2020, and will be featured in the 13th edition of the Landscape Photographer of the Year book as well as being part of an exhibition that will tour the UK, starting in London in mid-November.

The entrant who creates what’s judged to be the single best image, taking into account all four adult categories, will become the Landscape Photographer of the Year 2020 and will win £10,000, with additional cash prizes, from £500 to £1,000, for category winners and runners-up.

The competition is open to anyone of any ability and entrants can submit their content here: www.lpoty.co.uk. Here we take a look at some of the incredible past entries. 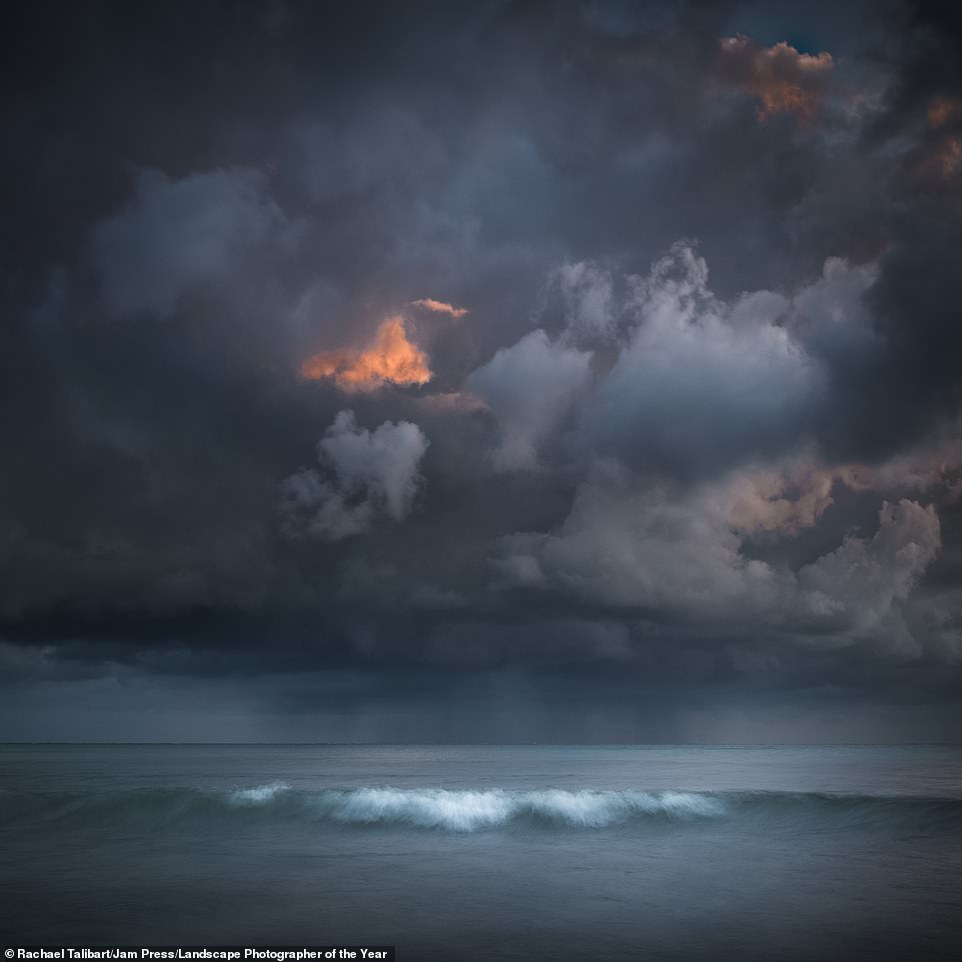 This image was taken at Birling Gap in East Sussex in 2016. Photographer Rachael Talibart said: ‘This was taken on a trip to the coast to meet up with fellow members of photography collective Parhelion. When we walked onto the beach, the sunshine was harsh but, as evening approached, the light just kept improving. I wanted a simple foreground as a foil for the dramatic sky so composed to exclude the beach and waited for an isolated wave’ 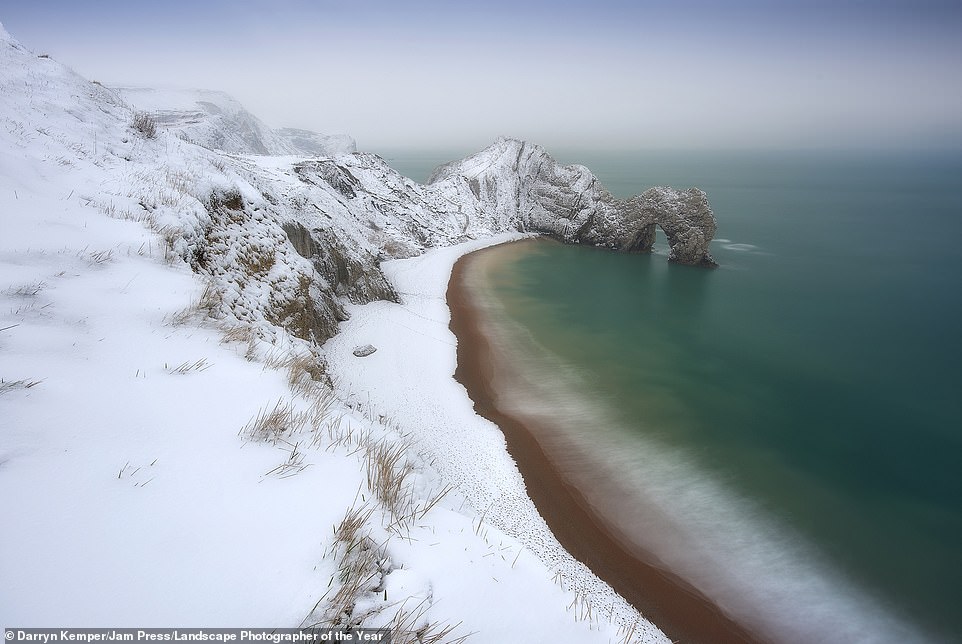 This is an award-winner from 2018, taken by Darryn Kemper at Durdle Door in Dorset. He said: ‘After seeing snow predictions on the forecast, I made the trip to Durdle Door the previous night from Surrey to avoid possible road closures in the morning. I slept the night in my car in minus temperatures in the hopes that I would wake up to something truly magical, and get an image of the iconic location in conditions that may come once in my lifetime. It was all so worth it!’ 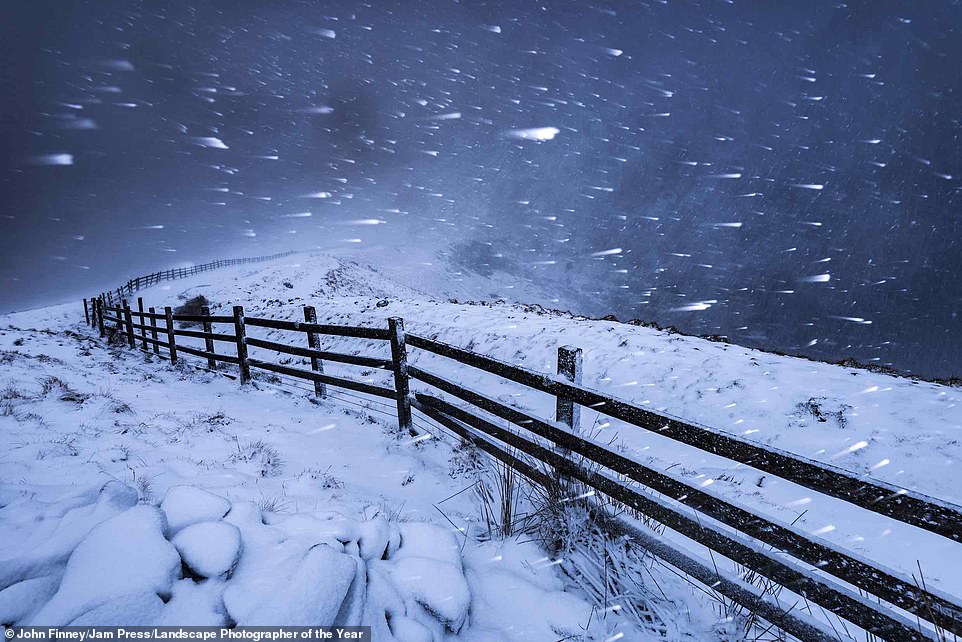 This stunning image was taken by John Finney in the High Peak of Derbyshire and was an award-winner in 2018. He said: ‘After a difficult journey in the snow, I made it to the top of Mam Tor [a 1,696ft hill], I could hardly stand upright for the blizzards. I decided to make my way down onto the Great Ridge. As the clouds got darker the blizzards got more extreme. I placed the tripod and camera at just the right angle to avoid snow getting onto the lens, and I used a flash gun and a relatively slow shutter speed to highlight the fast motion of the blizzard’ 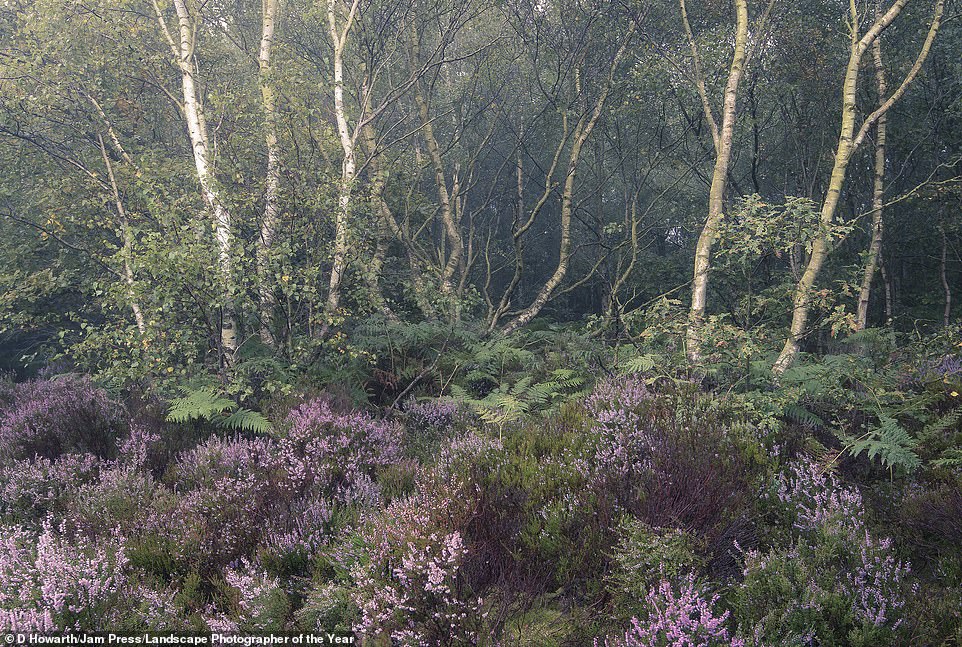 This beautiful image was taken in Honley, West Yorkshire. The photographer said: ‘This was taken in my favourite local woodland. I had been waiting for some time to photograph the heather in the fog. As soon as the conditions were right I headed down there to capture this scene’ 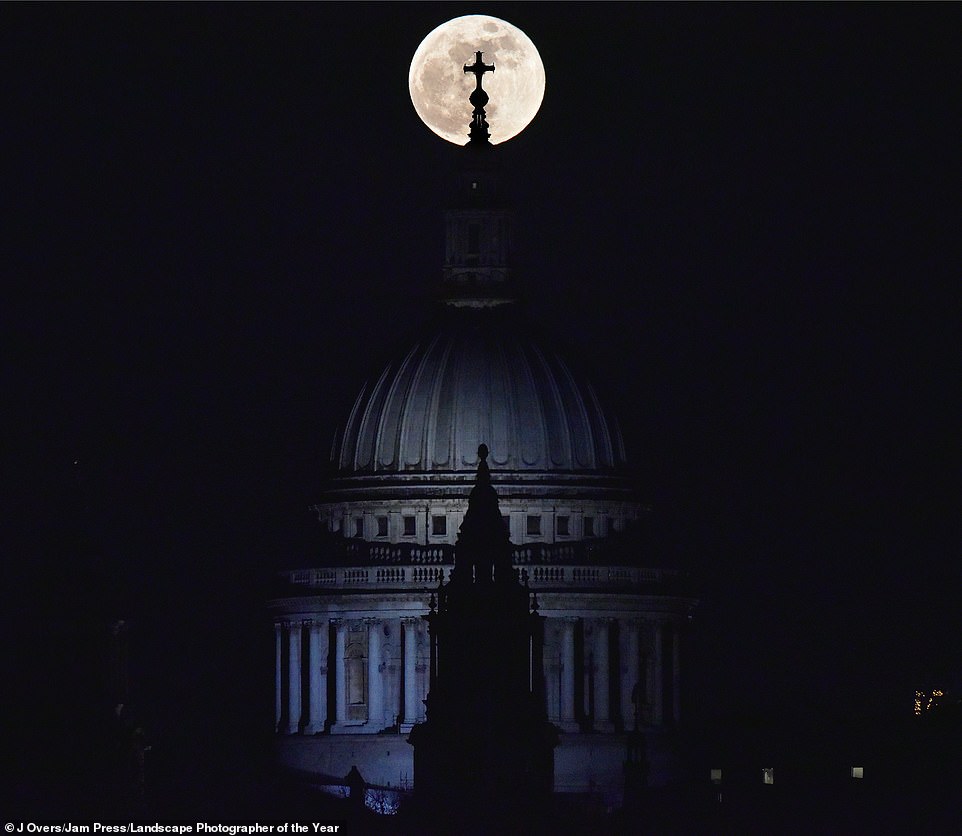 This incredible image shows St Paul’s Cathedral crowned by the Blue ‘Super’ Moon of January 2018. The photographer said: ‘There were two full moons in January 2018. The second is known as “Blue Moon” and because it was closer to earth than normal also a Super Moon. I decided to try and get it rising over St Paul’s Cathedral from Waterloo Bridge, and found it moving so quickly that I soon abandoned my tripod and had to support the 500mm lens on the railings as I moved quickly back and forth along the bridge – trying to catch the angle as it passed behind the cross above the famous dome’ 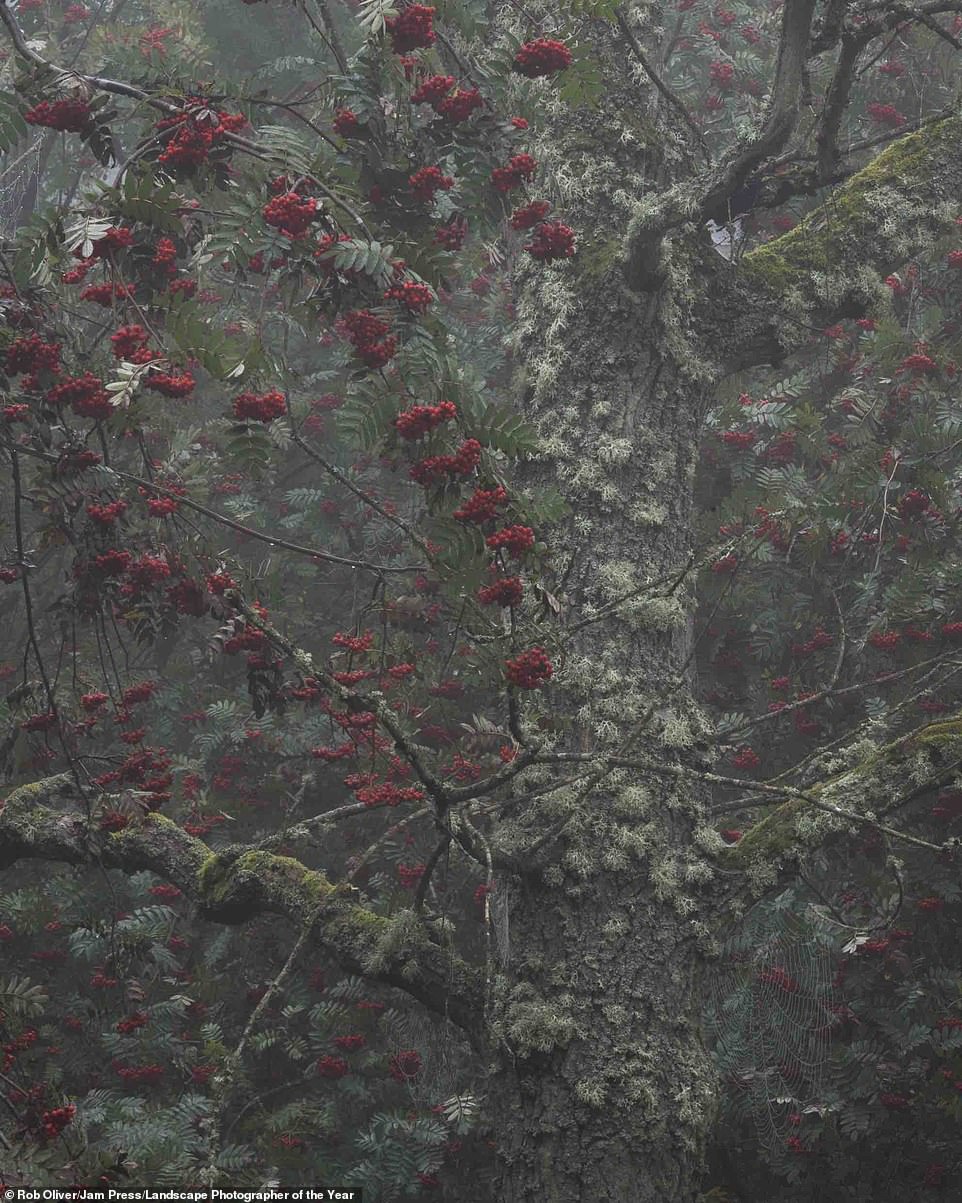 This captivating image was taken by Rob Oliver in Newbury, Berkshire. He says: ‘I go walking through the woods and fells and often climb the odd hill or two just for the love of being outside and making images that mean something to me’

This striking image was the Urban View, adult class, winner in 2017 and was taken by George Robertson in Grangemouth, Stirlingshire. He said that he waited for a cold, clear and breezy winter evening to allow him to capture the structures lit up against the early evening sky 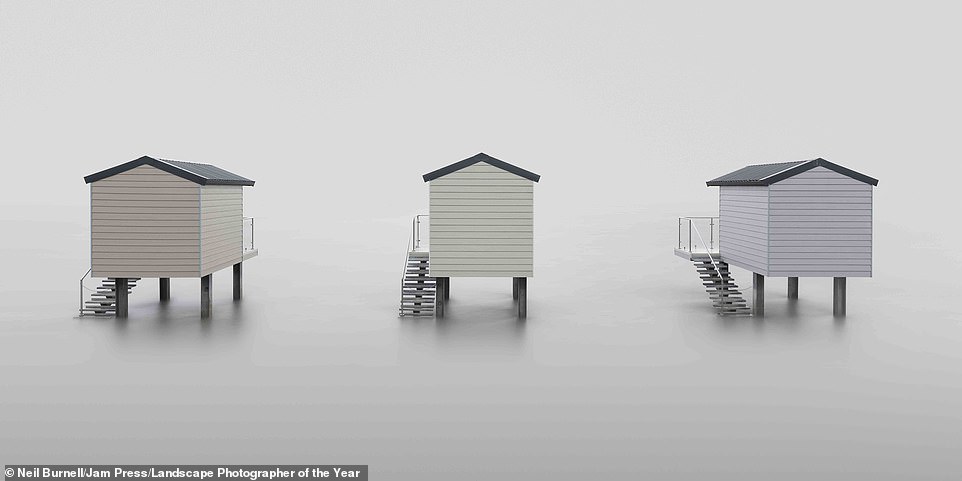 This image scooped Neil Burnell first prize and £1,000 in the 2017 Your View category. It was taken at Osea Leisure Park in Essex. Neil said: ‘These unique beach huts on the Blackwater Estuary are a minimalist landscape photographers dream. The stylish huts on stilts are finished in soft pastel colours and are perfect for a clean long exposure, especially on a misty morning’ 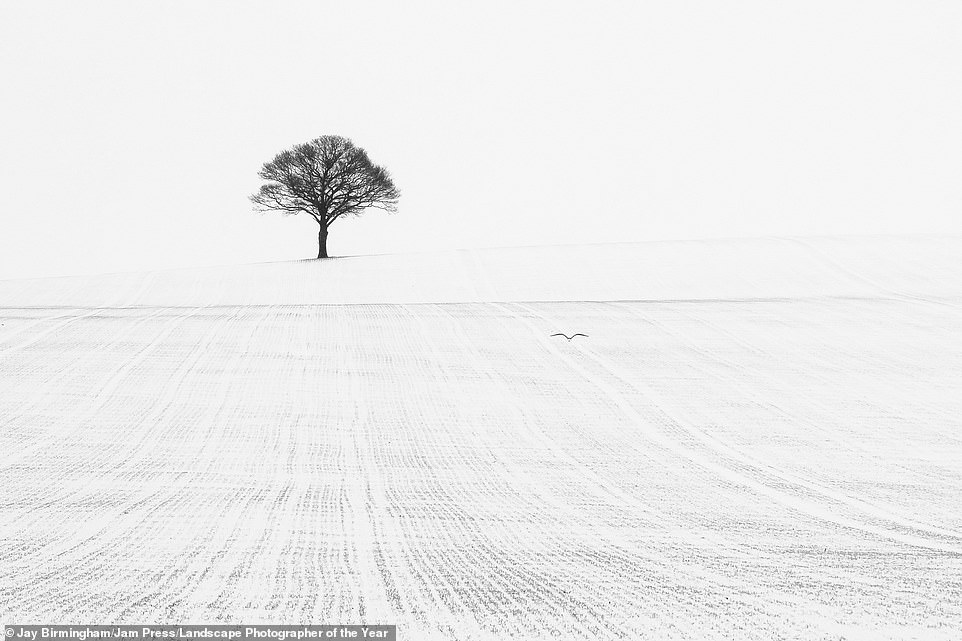 This image is called Serenity in the Snow and was taken by Jay Birmingham near Tamworth. It received a ‘commended’ from the judges. Jay said: ‘When heavy snow arrived this winter, I knew the shot that I wanted to take. A lone tree I had often passed stands on the ridge of a small hill on farmland not far from Tamworth, my home town. After having to abandon my car because of the slippery roads, I walked the rest of the way and found the conditions I was hoping for, with elements of the ploughed field just visible through the snow creating lines up to the tree, which was silhouetted against the white snow-filled sky. I took a number of pictures, but as I was cleaning snowflakes from my lens, a gull swooped into the shot. I swiftly removed my hand and fired off a few shots. When I looked back, I smiled. The position of the bird was perfect and helped capture the peace and tranquillity of the scene’ 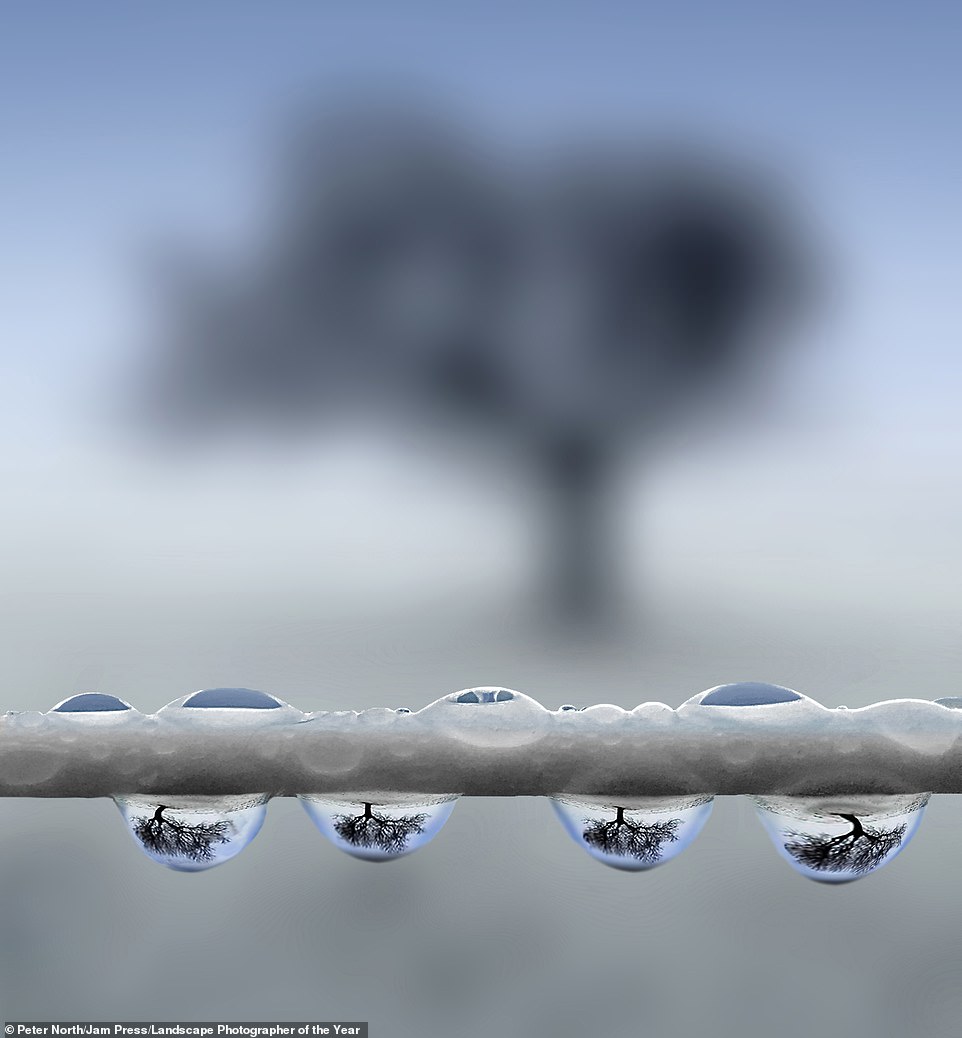 This image of raindrops on a washing line, taken with a smartphone in Hertfordshire, was highly commended in the 2018 Your View category. Photographer Peter North said: ‘I was fascinated by the concept of submitting a landscape photo where the main component of the image occupies about 90 per cent of the frame, is completely out of focus and needs a macro approach to make sense of it all! This was one of those chance shots we all encounter from time-to-time and, because I did not have my DSLR with me, was captured with my iPhone’

Tags: Amazing, entries, From, past, the
You may also like:
Recent Posts