Dive into an eccentric Swedish summer: Want to celebrate the sun like a Scandinavian? All you need is schnapps, a silly hat… and tons of shellfish

During summer on Sweden’s west coast, there is a sense of anticipation as its rather unique party season approaches. Everyone gets a little giddy about… crayfish. So don’t be surprised when throughout August you see groups sitting at long tables wearing bibs and funny-looking hats, singing silly songs and knocking back schnapps.

West Sweden is home to both the fat seaborn langoustine and its smaller cousin, the crayfish – a freshwater delicacy so popular in the country that, for most of the 20th Century, strict regulations restricted when it could be caught to avoid over-fishing.

Its return to the dinner table each August – a date known as ‘Crayfish Premiere’ – became one of Sweden’s biggest occasions, when friends and families got together and mounds of the crustaceans were wolfed down along with plenty of drink. 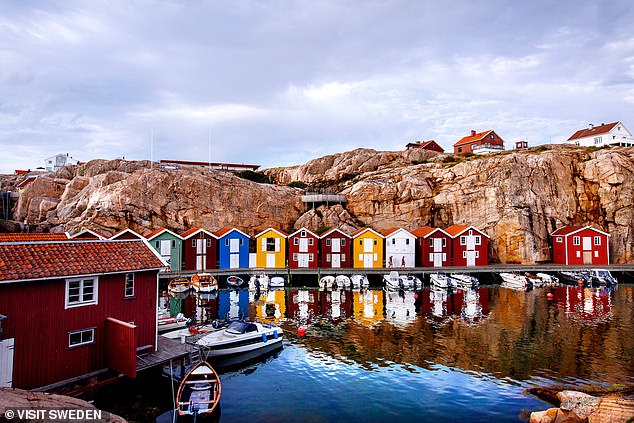 Bright outlook: The colourful harbour in Smogen, the liveliest summer town in the region of Bohuslan

But while the fishing rules were withdrawn in the early 1990s, when crayfish populations returned to healthy levels, it still seemed like a good excuse for a party, and so the tradition continues in true Scandi-style. Sweden prides itself on its cuisine, and, so for foodies like me, this is a gourmet trip to savour.

From Gothenburg we head north and there’s a soothing texture to the west coast. The glaciated Vrango archipelago is intensely pretty – dominated by pinkie-grey granite, giving a dramatic depth of field that appears to go on for ever.

My first impressions of Sweden inspire a sense of the big outdoors, where wide expanses of countryside are dotted with small communities with perfect paintwork and immaculate lawns, a Volvo invariably parked in the driveway. Impressive bridges intersect the coastline and white-fenced ranches remind me of the US.

We head into Smogen, the liveliest summer town in the region of Bohuslan. It’s full of whitewashed clapboard-fronted homes and terracotta-roofed beach houses that make you think of Scandi crime drama. The brackish North Sea air hurtles along a boardwalk brimming with shops, cafes, restaurants and clubs.

Bed for the night is at the traditional Smogens Hafvsbad, considered one of the most beautiful hotels in Sweden. The next morning, I can’t resist a crayfish safari hosted by Martin Olofsson, who has fished these waters for more than 20 years.

This is grassroots tourism – the chance to experience life as a Swedish seadog for those who love the smell and swell of the sea. Martin tours the archipelago come rain or shine, hauling up his langoustine pots of treasure. About 700 are put out daily, and today brings a good catch at 355lb.

Martin is happy. He tosses a bucket of the critters straight from the net into a drum of boiling water on the deck. We watch them turn pink, then scoop them out, peel and chuck the shells overboard, before savouring the deliciousness. From Smogen, we head inland towards the Gota Canal. 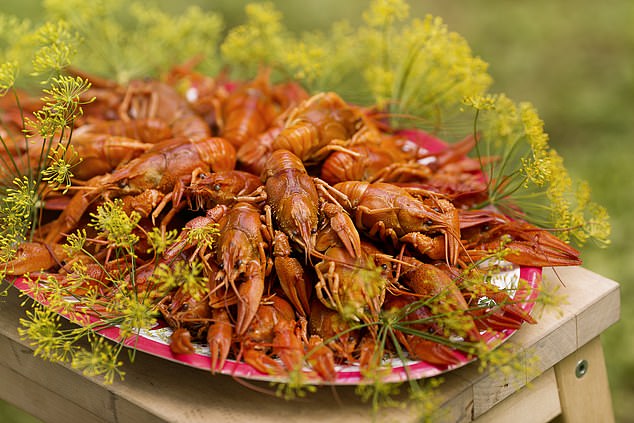 West Sweden is home to both the fat seaborn langoustine and its smaller cousin, the crayfish (pictured)

In 1809, Baltzar Von Platen and Scottish canal builder Thomas Telford presented a plan for a water route bang through the middle of Sweden to avoid paying hefty Danish duties on shipping.

It took 22 years to dig but has remained a key transport link for more than a century, covering 120 miles. We join locals outside the old converted mill in Norrgvarn, who are throwing pots laced with bait of rotten or raw fish into the canal. The river crayfish are nocturnal and can be caught only after dusk – 10.30pm in summer.

They have to be kept alive with running water until they’re placed in a giant pan of boiling, dill-scented liquid, so waiting to eat them requires a little more patience.

While crayfish are the undisputed stars, the traditional August feast also includes regional craft beer, schnapps, cheese and crispbreads from artisan food producers, which I taste and buy along the route.

Qvanum Food & Malt brews delicious beer with water from its own well and distils spirits from malted grains flavoured with cocoa, cumin and fennel. Owner Claes Wernerson started brewing in 2005 with help from an English neighbour, who was delighted to have a quasi-pub on his doorstep. 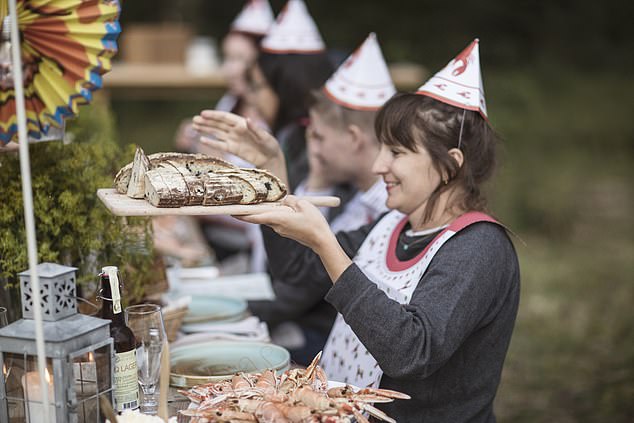 Party Time: Locals all dressed up in hats and bibs during a crayfish party

Further along, in a garage on the Vara plain, I discover a cheese-lover’s paradise on an old military base (sivansost.se). Owner Sophia Johansson comes from a line of famous cheesemakers dating back to 1875. When her mother retired, Sophia quit her job as a pastry chef and baker to take over the family business. They soon needed more space and bought the abandoned Second World War army garage.

We catch her experimenting with carrot and beetroot crispbread, with delicious wafts drifting in from the kitchen. I chose a Swedish blue served with red tomatoes and vanilla marmalade and pop a few of her wonderful sesame and linseed crackers into the basket along with some apricot and walnut bread.

Party ingredients complete, it’s time to feast on this balmy August evening. Throw in a few friends, heaps of freshly boiled crayfish, some fantastic cheeses and crispbreads, more craft beers than I care to mention, followed by local schnapps and a selection of silly drinking songs, and hey Olaf, it’s party time! Crayfish are all the better when eaten at a long table under the stars with flamboyant coloured paper lanterns (a smiling full moon is best, apparently). Add bibs and hats and the banquet begins.

It’s finger-sucking good with plenty of noisy slurping to extract the juices – all perfectly acceptable behaviour. It’s all mopped up with soft olive sourdough. And that’s a Swedish crayfish festival.

Sarah Siese was a guest of the Edible Country experience by the Gota Canal in West Sweden. Flights to Gothenburg from London with British Airways (ba.com) cost from £38 one way, from £26 one way with Norwegian (norwegian.com), and £19.99 one way with Ryanair (ryanair.com). For more information go to visitsweden.com/ediblecountry. Smogens Hafvsbad (smogenshafvsbad.se) is considered to be one of Sweden’s most beautiful hotels.

Tags: A, crayfish, is, party, Swedish
You may also like:
Recent Posts