Poggio Mirteto, Cantalupo, Casperia, Vacone, Configni, Stroncone. Hilltop towns in the ancient land of Sabina, calling to each other across parched patchworks of vineyard and cornfield. Woods, orchards, olive groves. You could drive to these places, of course. But my experience is, when you arrive on foot they are different. They are better. And best of all in summer.

You’ll need water with you at all times for this adventure. A light backpack with just one change of clothes. Trekking shoes on your feet, poles in your hands, sweat-wicking shirts and shorts and underwear. Plus a broad-brimmed hat, shades and a big tube of sun cream. Then just surrender yourself to the heat and the cicadas. 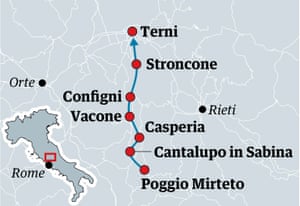 The start is simple enough. An hour’s rattly train ride north-east beside the Tiber, from Rome’s Tiburtina station to Poggio Mirteto Scalo. Then a four-mile climb, cross-country, to Poggio Mirteto proper. This will get you used to the idea that every place you’re going to arrive at in the coming days is at the top of a long, steep slope. In fact, poggio means little hill. I remember a chalky track between dry thistles so tall their thistledown waved above our heads. You enter the town through a narrow stone arch perched above a sheer drop. Already you can look down and feel satisfied.

The key to walking in heat is to start before dawn and ease into it. So check out Poggio the afternoon you arrive, then early to bed and wake at five. Piazza Martiri della Libertà is dustily decorous, more an elongated, tree-lined oval than a square. Creamy baroque church at one end and austere brick cathedral at the other. Pretty facades, patches of green. A vigorous yucca tree thrusts out of 15th-century masonry. At the elegant tables of Caffé Gentili you can practise ordering a first cedrata. Made from Calabrian cedro, a large yellow citrus fruit, and served in a small bottle that you pour yourself on to crackling ice, this drink is sharp, thirst-quenching ecstasy. You’ll be needing it. 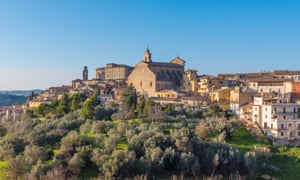 One last requirement. It’s hard to find detailed paper maps in Italy. Nor is the countryside thick with fingerposts pointing the way. If you’re going to avoid the roads, you need a hiking app to find the paths – they’re easily available. And it’s wise to plan at least the start of each day’s route the night before; then, when you close the door of your B&B at an ungodly hour, you’ll know where you’re going.

There’s a special intimacy to slipping out of medieval walls while it’s still night. Thankfully, the day starts downhill. The deep shadows of the trees are furtive and fresh, the grass dewy, air balmy, and all around an atmosphere of quiet vegetable pressure toward the splendour of the rising sun.

Which comes all too soon. Towards seven the light is suddenly sharp over a stand of feathery bamboo. It’s warming fast. At a corner, an enormous agave plant waves grey-green tentacles. Sunflowers raise their heads. In the orchards the peaches begin to glow. Then around 8:30, as if a switch were tripped, the cicadas begin. One strikes up in a tree right above, a rasping rhythmic whir, then another and another and another, until a harsh, hypnotic chorus fuses with the now oven-hot air in one vast summery stupefaction. 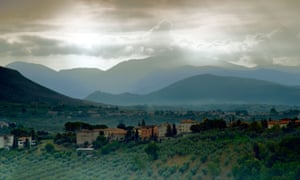 We’re walking north here, in a broad, undulating valley, through fields of scorched stubble watched from towers and castles on the hills each side. At the end of the valley is the larger town of Terni, two days away, offering the option of a train back to Rome. But if you have appetite and energy, it’s just another two days north to Todi, taking in the grand Roman ruin of Carsulae and the pretty town of Acquasparta. Then perhaps another two west to Orvieto. Or north to Perugia and the upper Tiber valley. My partner and I did this walk as part of a longer trip, following in the footsteps of Garibaldi when he tried to march an army from Rome to Venice after the collapse of the liberal Roman republic in 1849. This segment seemed the most intensely Italian, and the least known.

But this morning’s first goal is Cantalupo. You have to lift your head to see it, a mass of piled muddled stone rising from gnarled trees far above. The slope is scandalously steep. But the pleasure of these days lies in an intensity of contrasts: first the sweat and strain, then the solace each small town affords. The water fountain by the ancient gate. The coolness in dark churches and resiny smells under gnarled pines. Fortunately, it’s rarely more than three hours’ march between one settlement and the next. You’ll be in Cantalupo’s main square in ample time for freshly squeezed orange juice, cappuccino and croissant, under sunshades, surrounded by a blaze of potted oleanders. It would never have felt so good had you arrived by car.

We had set our sights on Vacone as a place to stay, taking time out for lunch in Casperia, another climb to another miracle of the middle ages paralysed in the day’s blue dazzle. Then our app let us down: a path petered into nothing. We turned back. It was past evening when we tackled a rutted track that climbs a thousand feet. There’s a stone trough here, set in the cliff beside the path, and the words of an ode that the poet Horace wrote, more than 2,000 years ago, in praise of the water that springs from the rock. “O fountain of Bandusia!” When Garibaldi passed in 1849 the spring was dry and his men, mules and horses went crazy with thirst.

Our water was finished too. But we were almost there. The track turns into cobbled alleys, then a broad terrace beneath an ancient clock tower. Vacone. Two women were sitting on the parapet, a vast sunset panorama behind them. Was there anywhere to stay, we asked. No. Was there a cafe? No. Really, no cafe? There was a bar, they said, that opened after dinner, “For the men to play cards.” And a tiny grocery.

I mention this moment to warn you that you should decide before setting out whether you are up for a night in the open. Whether to take a light tent, perhaps. We had one, but Eleonora, my partner, had read that there were wolves in these hills. Of course no one has been killed by a wolf in Italy for more than 200 years. Wild boars and dogs are more likely encounters. But the imagination is a terrible thing. Wry and generous, the two women phoned all their friends and relatives. Did anyone know anyone who had a place to stay? Children ran back and forth. The grocery provided beer and mozzarella. Finally a B&B was found, another 40 minutes’ walking, in the dark. 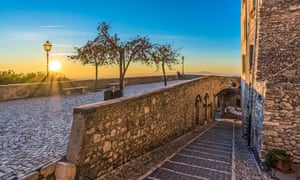 On arrival, every day, you must plunge your walking clothes in the sink and wash them at once. They’ll dry in the night and be ready for the dawn. In bed you feel your body glowing, ripe with summer sun.

Some towns offer evening entertainment. Carmina Burana on the steps of a Duomo. A beauty contest under a loggiato. In one village a magician. In another a one-man band. And yes, there are artworks to look at along the way. If you must. A fine San Sebastiano, for example, cheerfully resigned to his arrows above the altar of a tiny church on cobbled streets heading to Configni. But this holiday is not about frescoes and monuments; rather, it’s about the pleasure of eating cappellacci with radicchio and robiola cheese behind bead curtains in Configni’s one osteria. Then the fragrance of lavender and mint as we plunge back down to the valley; the elegance of the bulrushes and the blue of the cornflowers; the distant braying of a donkey.

Vacone to Terni via Configni and the magnificent Stroncone is 27 breathtakingly beautiful, backbreakingly arduous kilometres. There’s a stream to ford, with slimy stones under your toes. At burning midday, in a lane sunk between high banks of bush and bramble, near a place called Coppe, you may stumble upon the miracle of a lavatoio, two long stone basins for washing clothes, brimming with dark water. If you find it, take off your socks and shoes, sit on the edge and plunge in your burning feet. A plaque on the wall beside says that per fatale disgrazia – through fatal misfortune – Virgilio Giusti died here in 1948, aged 18, in the flower of youth. Italians love these sad memorials, flowers forever refreshed at the point where a foot slipped or lightning struck. There will be a name, a date, a few words. They spin a sticky web of sentiment across the landscape, and remind you, as this whole trip should, how lucky you are to be alive in a world where there is Italy and summer and freedom.